At the start of the season, Liverpool were without Thiago Alcantara. The Spanish midfielder got injured in Liverpool’s opening fixture in the English Premier League against Fulham. He spent 53 minutes on the field and was taken off the field. Thiago made a return in Liverpool’s heavy defeat against Napoli in the UEFA Champions League. The 31-year-old started in the next match against Ajax. Thiago has been Jurgen Klopp’s best-rated midfielder since joining the club. He controls the pace of the game and is very confident with the ball at his feet. We now look at some of the stats that show how Thiago helps his side to show attacking dominance in the game. 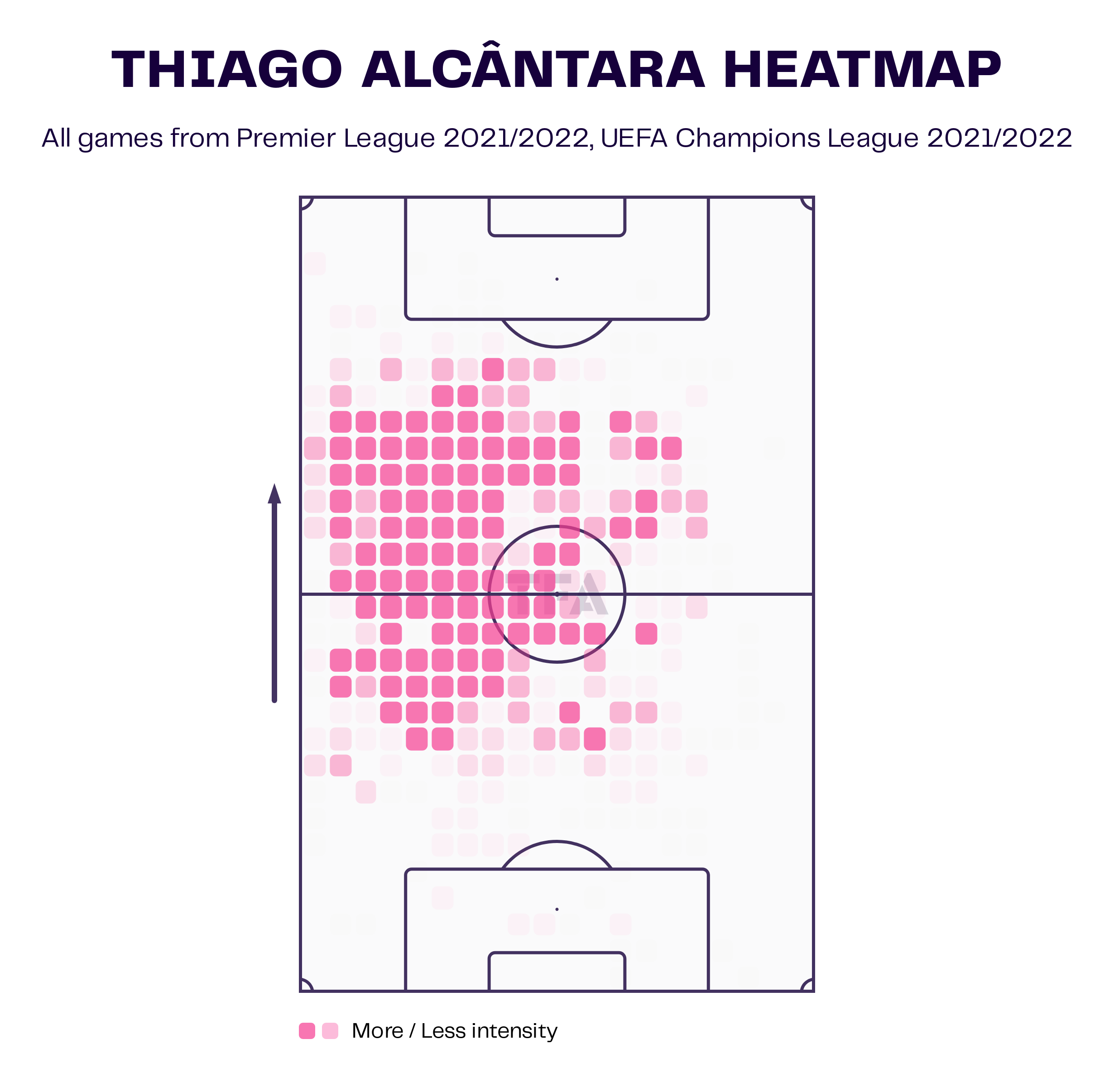 Thiago Alcantara plays on the left side of the midfield for the Reds. The above viz shows the heatmap of the players from the last season. His average position is inside the middle third. The Spaniard made 35 appearances in total in the English Premier League and the UEFA Champions League. This season Thiago has only appeared in three matches. 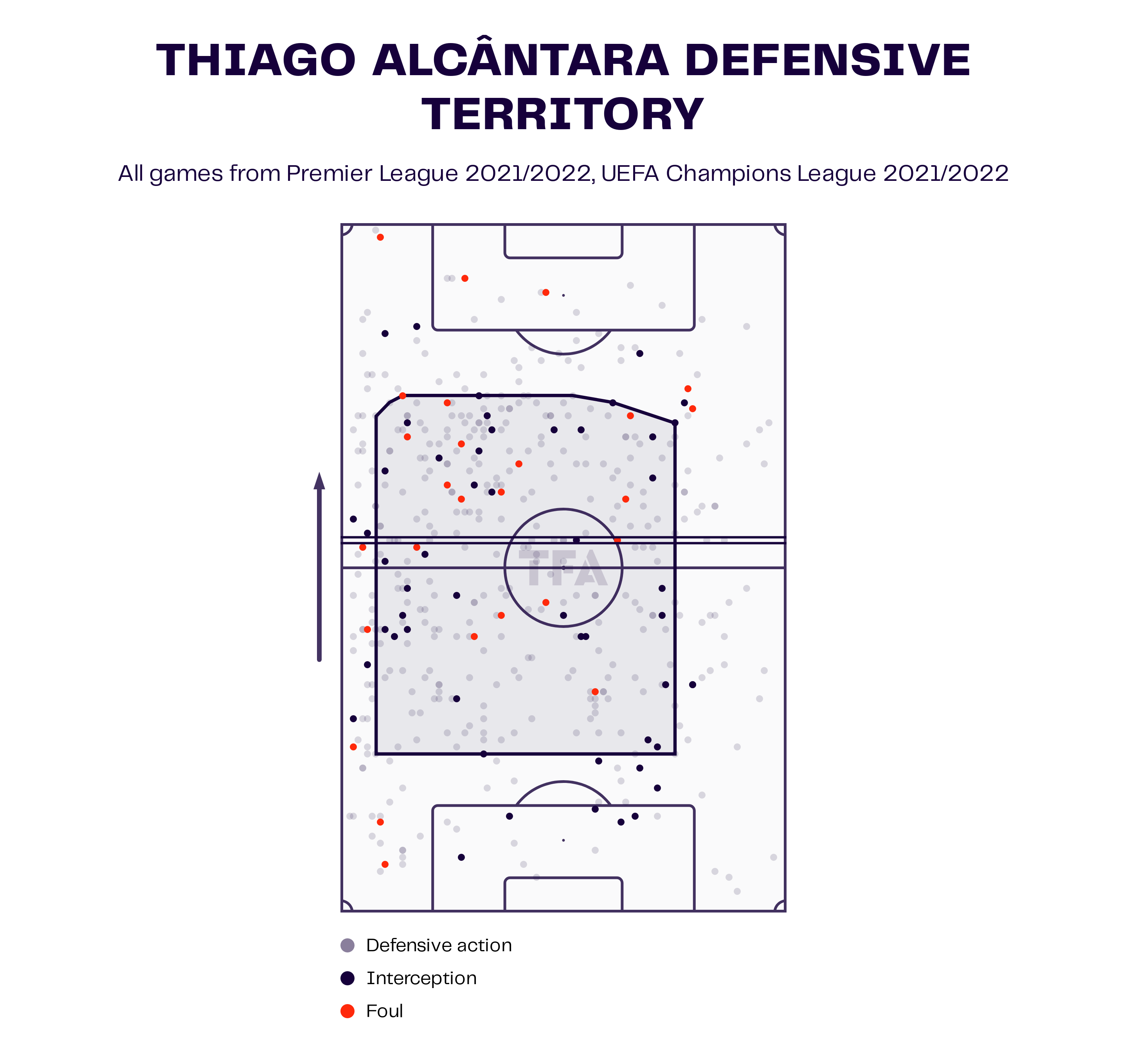 The above viz shows the area where Thiago covers a lot of areas in the middle third to defend his team’s goal. He made some crucial interceptions to stop the flow of the opposition’s attack. The above viz shows the map from last season. We can observe that Thiago has intercepted a few passes in the attacking half, and these interceptions could lead to a counter-attack. This is the area where his experience comes in handy, and Thiago has also been consistent in such areas. 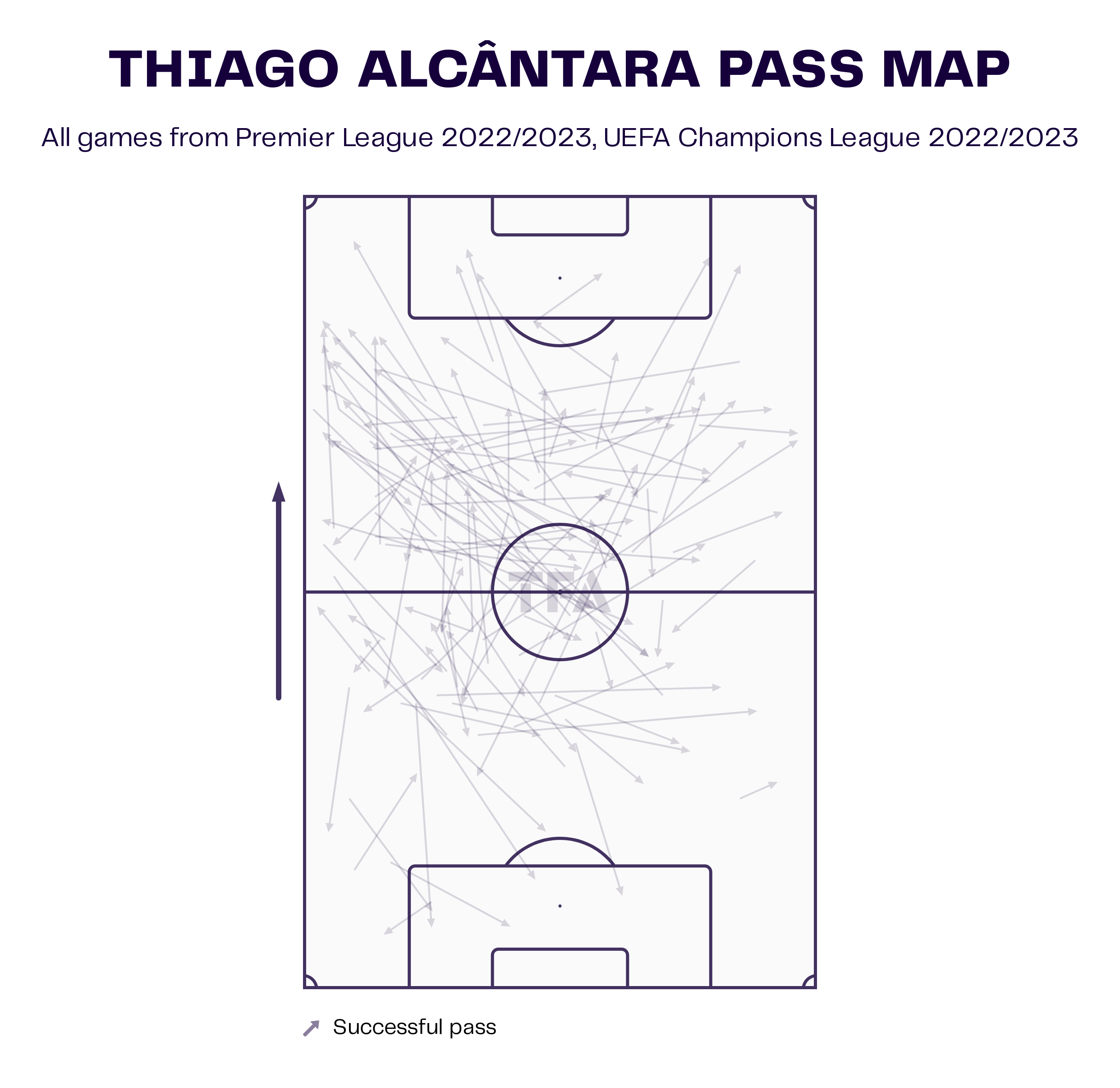 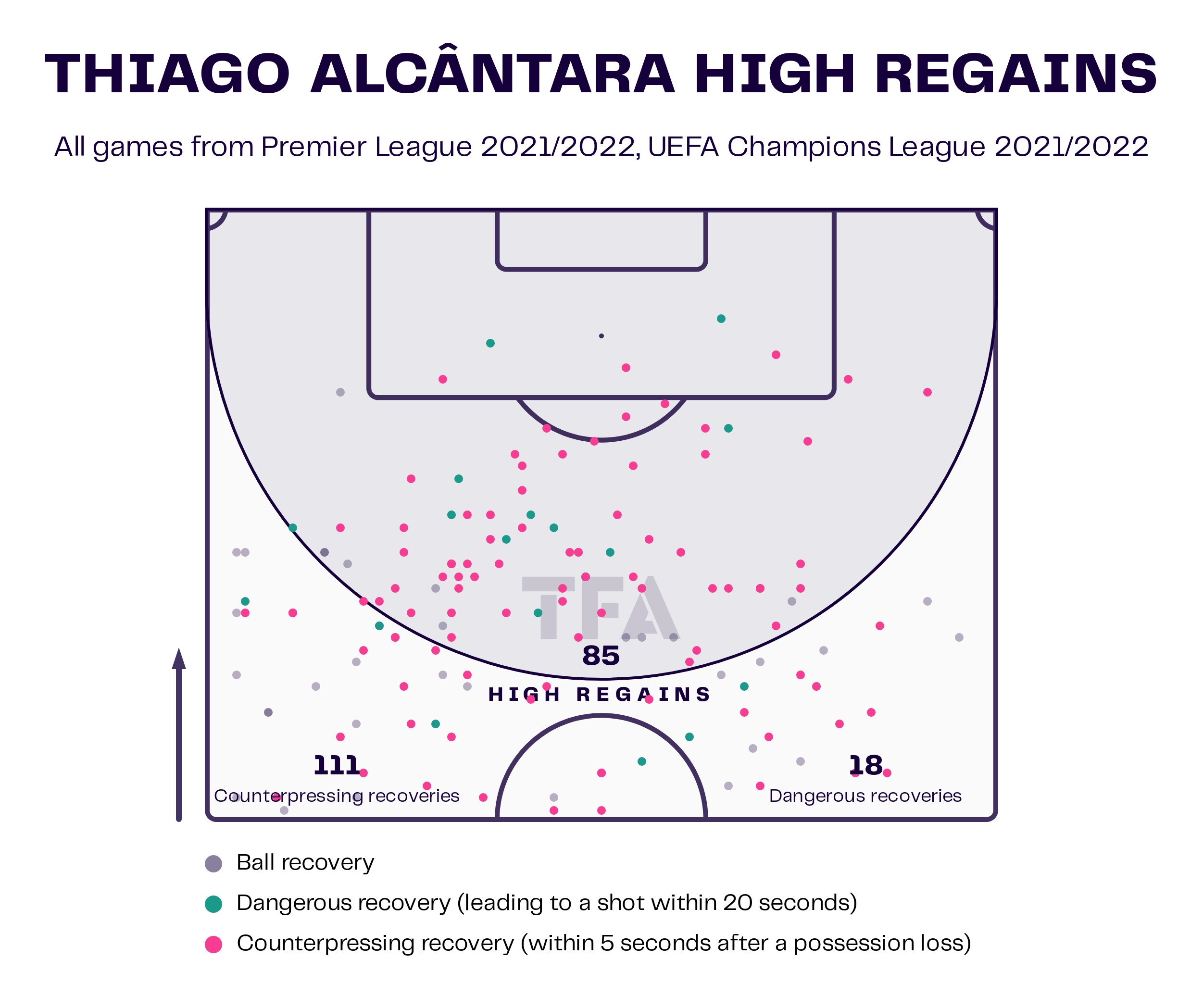 Another area where the player is handy for the Reds is in his ability to recover the ball in dangerous areas. Last season, he made 85 regains in the attacking third and a few of them led to a shot within the next 20 seconds. Other than this, these recoveries put a lot of pressure on the opposition players as they constantly feel the pressure on them. 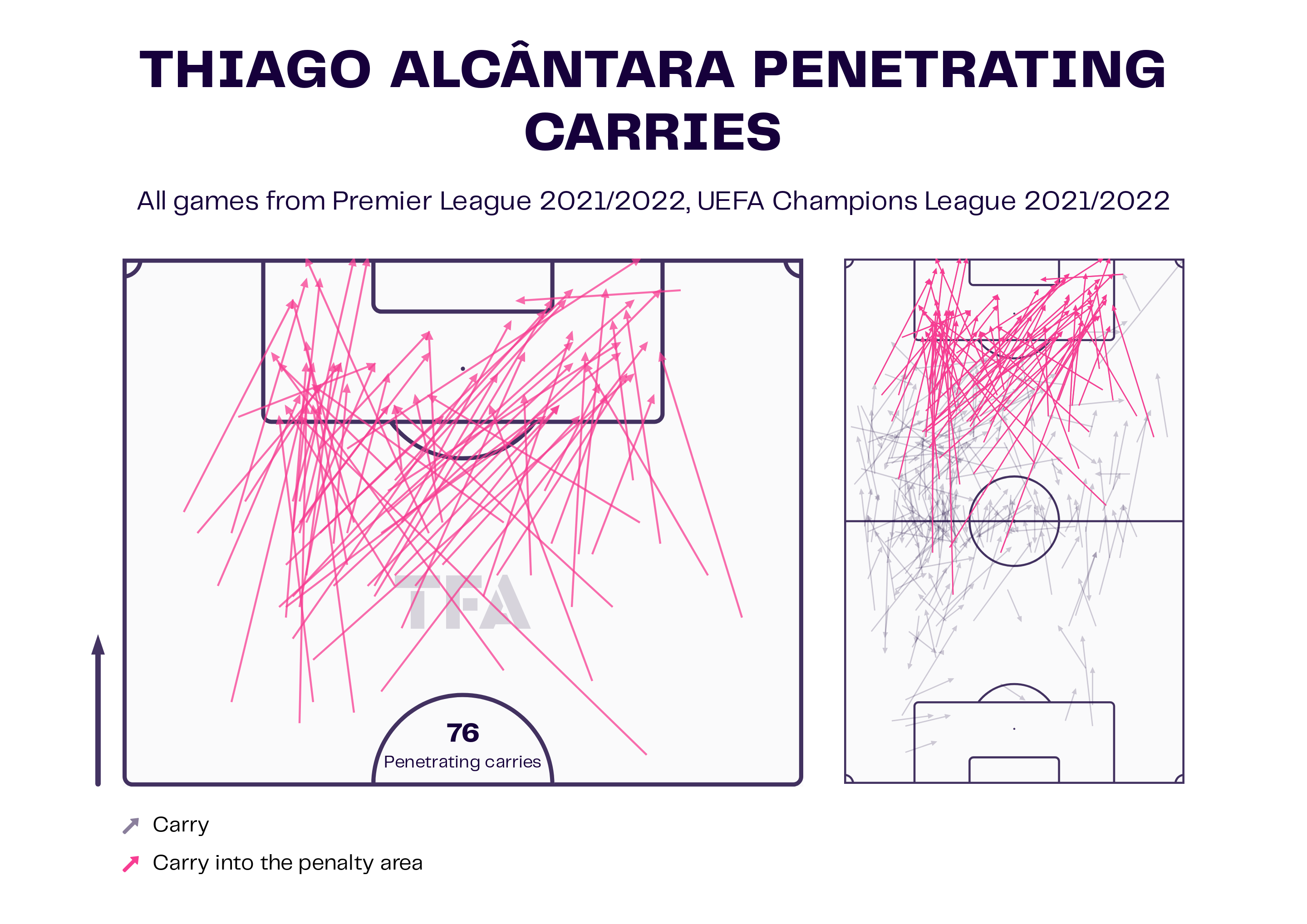 Thiago Alacantra can also carry the ball in the penalty box and often creates panic in the defence. He made 76 penetrating carries last season and mostly entered the box from the left side. Such runs can result in a foul or provide an opportunity for a teammate to score a goal.

Thiago’s return will be a boost for the manager. His skills on the ball make him a world-class player. The player will aim to help his side win their upcoming league matches and catch the league leaders.