Jurgen Klopp’s Liverpool haven’t made the kind of start in the English Premier League and the UEFA Champions League as they wished for. The Reds have played eight matches in these competitions and have a record of three wins, three draws, and two losses. Liverpool had a few injury issues at the start of the season and the number of players injured in the team was increasing. This led to a lot of changes in the starting 11 in every match, and that resulted in a poor run of results. One of the areas where Liverpool have struggled is in defence. Joel Matip’s injury at the start of the season had a lot of effect on this Liverpool side. He had formed a defensive partnership with Virgil van Dijk, and the Dutchman also missed his defensive partner and looked vulnerable in the defence. Joel Matip made a proper comeback in the last match against Ajax. We now look at some of the stats that show how Matip could solve the defensive issues at Anfield. 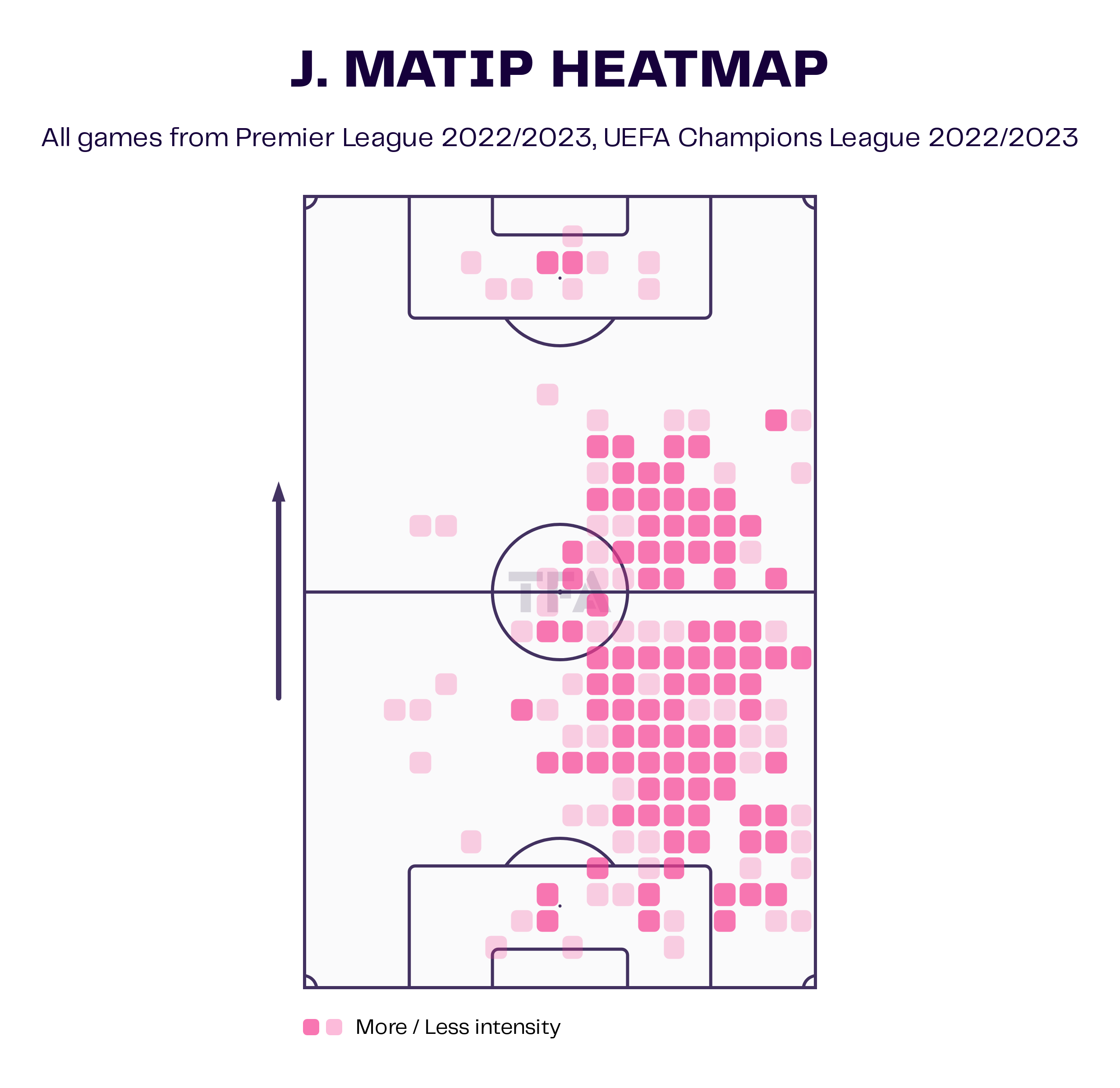 Joel Matip has made four appearances for Liverpool and spent 286 minutes on the pitch this season. The 31-year-old centre-back plays as the right centre-back and likes to carry the ball from the defensive third to the middle third. He is very confident with the ball and can play passes to his other teammates. 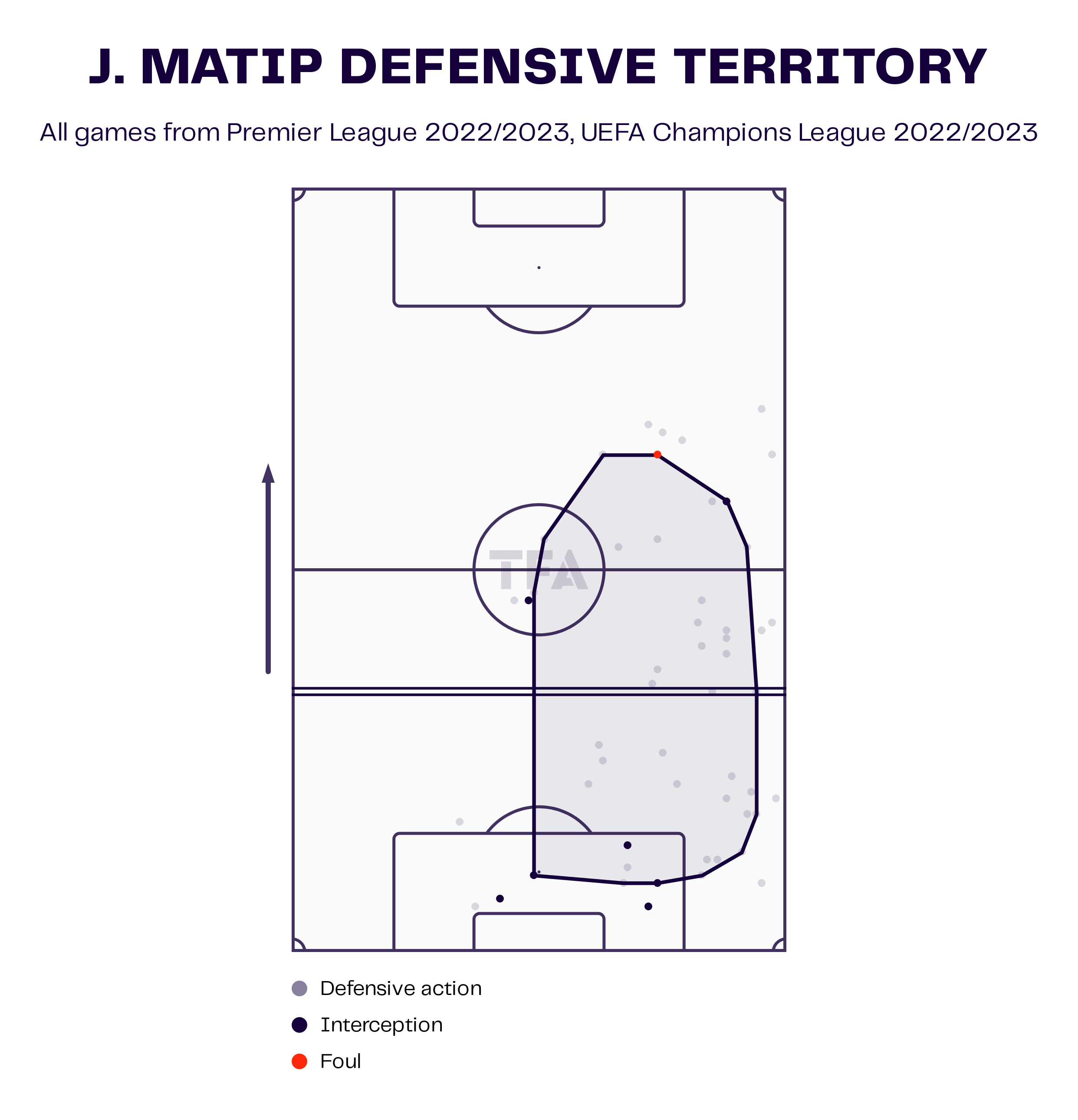 Joel Matip has made defensive contributions in the area marked in the above viz. He averages 7.87 defensive duels, 4.11 aerial duels and 3.08 loose ball duels per 90 minutes. The win percentage is 82.6% for defensive duels, 75% for aerial duels, and 66.7% for loose ball duels. Other than this, he averages 4.11 interceptions per 90 minutes and a few of them have been made inside the penalty box. 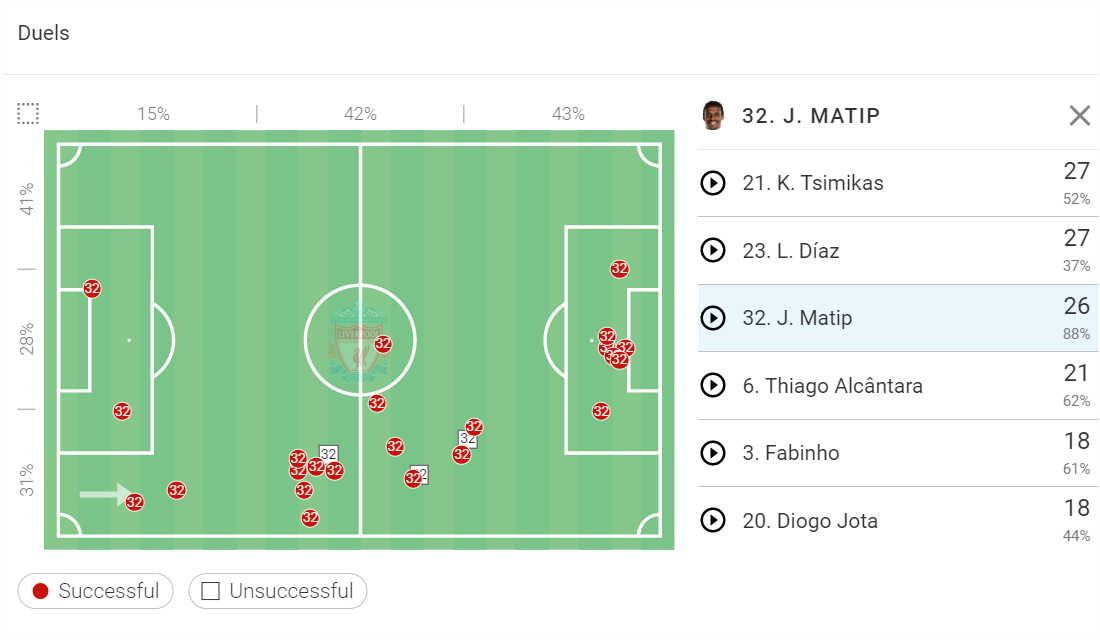 Joe Matip made a sensational return by scoring a winning header against Ajax. He returned to the starting 11 and replaced Joe Gomez, who played a poor game against Napoli. Joel Matip, on his return, dominated the defence by winning 88% of his duels. The centre-back won his every aerial duel and only lost three duels in the match. He showed his class and helped his side win three points. The above viz shows that Matip won seven duels inside the opposition penalty box, and this makes him a threat during set pieces. 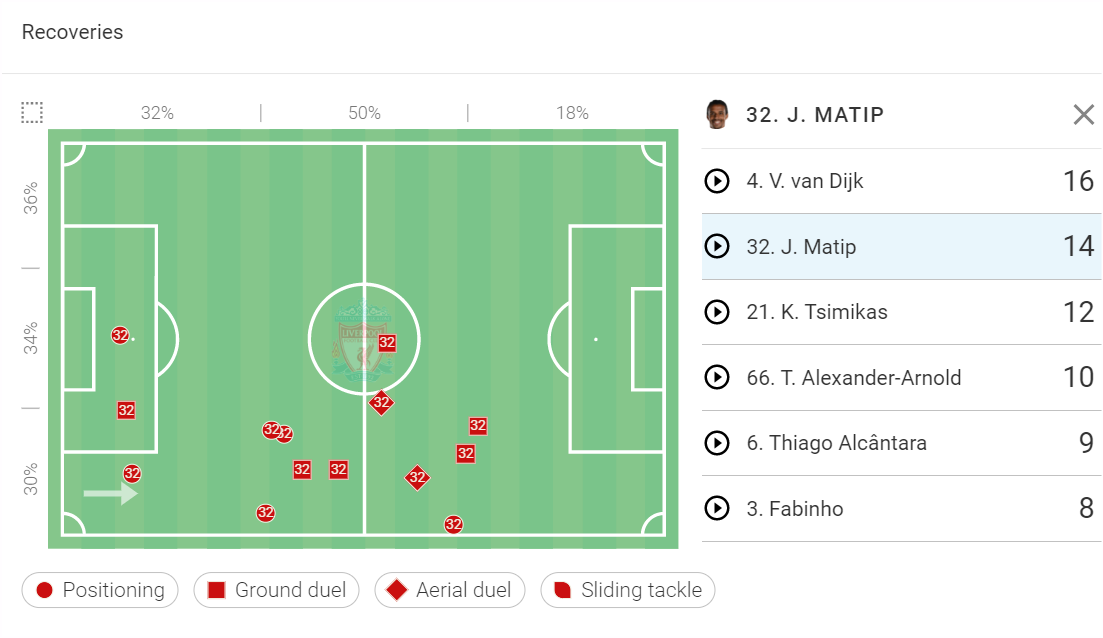 Another area where the player has and will prove handy is his ability to recover balls. This season, he has averaged around 12 recoveries per 90 minutes, with 28.6% of them coming in the attacking half. Against Ajax, Matip made 14 recoveries and six of them came in the opposition half.

Joel Matip had an excellent game against Ajax. His goal at the end boosted the confidence of the team before going into the international break. Jurgen Klopp will be happy with the king of performance showed by the 31-year-old and will hope that Matip helps his side to keep more clean sheets.