There’s always that buzz when you join a new club on Football Manager. From checking out the club’s current staff team to looking at their finances, to looking through the squad you’ve inherited, it almost feels like you’re entering through the doors of the club’s training ground for the first time. Many FM players will have different opinions on what to do first when you join a new club but looking through your new squad and assessing it is arguably the most important thing on your to-do list. Whether it’s a thorough assessment that includes elements such as analysing squad depth and judging players on the individual positional roles you intend to use in your tactics, or whether it’s just a quick glance to see which players you’ll be working with, some form of squad assessment must take place.

Using Football Manager 2022 (and the latest official squad update), we will provide just that – an assessment of Liverpool FC’s squad as we head into Football Manager 2023. How will this work? Well, using the FM22 Liverpool squad, we have filtered the players who are no longer at the Anfield club into the reserves squad, so all that remains in the assessment are the remaining players from last season’s first-team squad. Of course, there will be some notable absentees from the FM screenshots. Players like Darwin Núñez and Calvin Ramsey, for example, aren’t in the Reds’ squad, but we will still include them in the discussion at the relevant points.

This article will look to provide a strong insight into the state of the squad by identifying squad leaders, young prospects, key players, and the weakest players. Furthermore, we will be using the various squad analysis options and the squad depth analysis tool in-game to highlight which areas of the pitch Liverpool excel in, and where recruitment may need to be focused on.  It is worth noting that player ratings/attributes and their PA/CA (potential ability/current ability) will differ in FM23 from those of FM22 in some cases.

We begin by getting to know the Liverpool squad with a brief overview of the depth in each position – based on the default Liverpool formation: the FM fan favourite 4-2-3-1. This segment of the analysis gives us a chance to see where Liverpool need to improve in terms of numbers, but we will also dive deeper to compare the squad with the rest of the league. 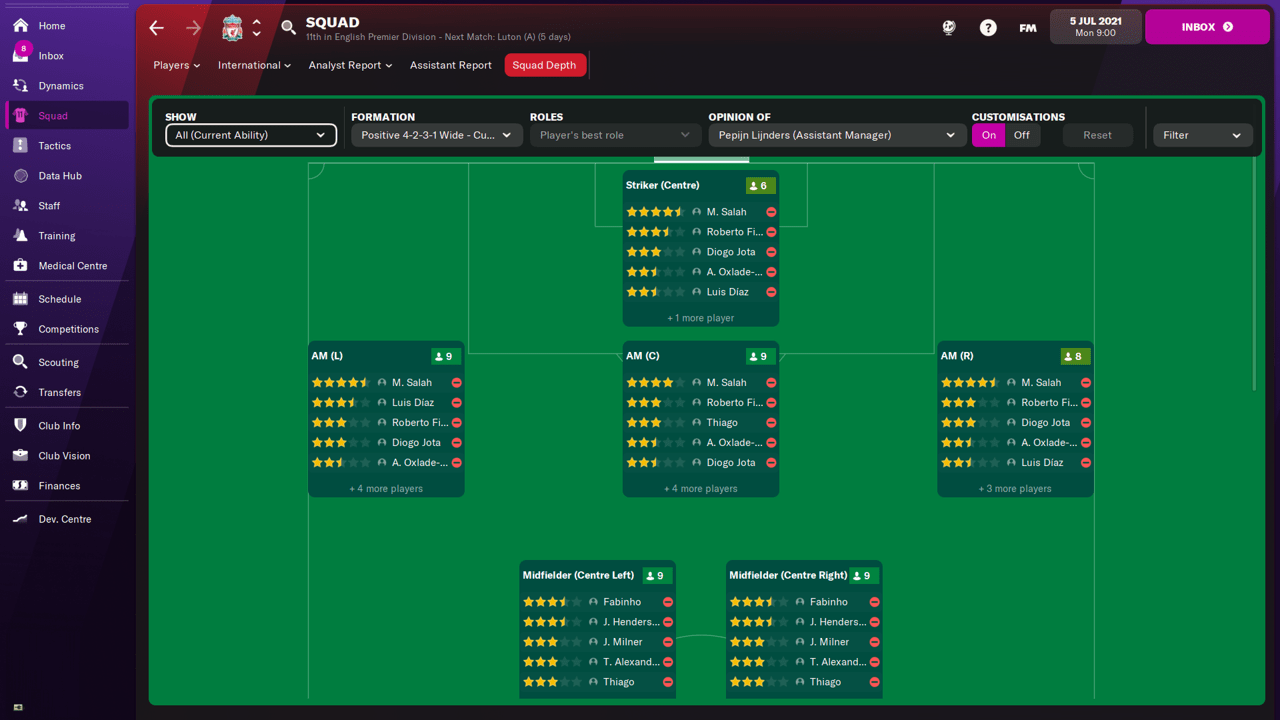 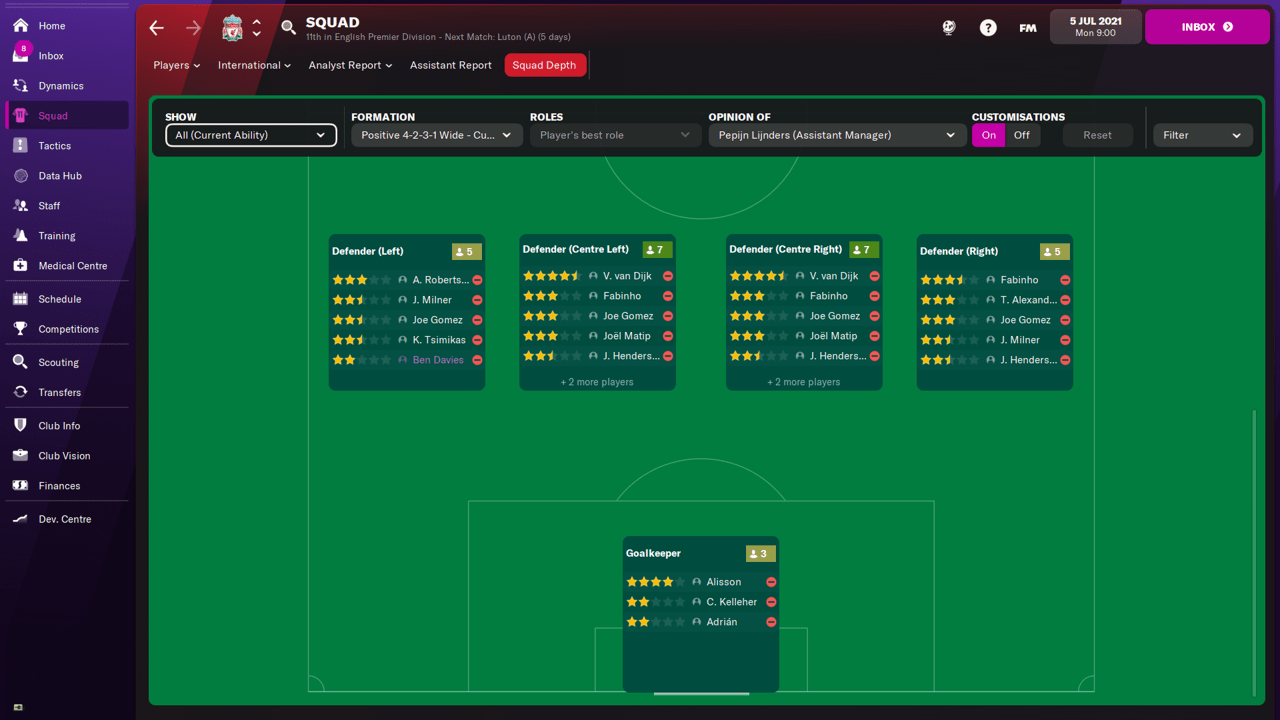 Unsurprisingly, Liverpool have strong ratings in every area of the pitch, particularly in attack. There are also a number of players who are strong in a variety of positions, which will come in handy with squad rotation. Key players like Alisson, Virgil van Dijk, Fabinho, Mo Salah, and Luis Diaz were all judged at three and a half stars out of five last season and are likely to be so again in FM23 – these players will be pivotal to any success as Liverpool manager. While Andrew Robertson and Trent Alexander-Arnold are rated up there with the best in their respective positions in the real world, FM22 had them rated at a CA of three stars, although Robertson’s CA seems to float between three and three and a half stars. Then there is also the factor of Alexander-Arnold’s age – his PA is far higher than his CA as he still has plenty of development to come before reaching his peak.

In terms of weak spots, a truly solid backup goalkeeper would not go amiss – keeping Kelleher could be beneficial as he could develop past two stars due to his age. Adrian, however, could be one to send through the exit door – this would also help the wage budget nicely too.

Beyond that, there are no real weaknesses in terms of CA, but there are a number of players with average CA ratings but earning substantial wages. Players like Alex Oxlade-Chamberlain (three-star CA/PA, earns £125k p/w), and Naby Keita (three-star CA/PA, earns £130 p/w), could bring in large sums of money in both the transfer budget and wage budget – let’s face it, they aren’t really going to get consistent first team football at Anfield. There are other players that fall into that bracket, but you must always be careful of selling too many players as A) it could be difficult to bring in suitable replacements and B) selling too many players can unsettle the rest of the squad in terms of morale and their trust in you as a manager. 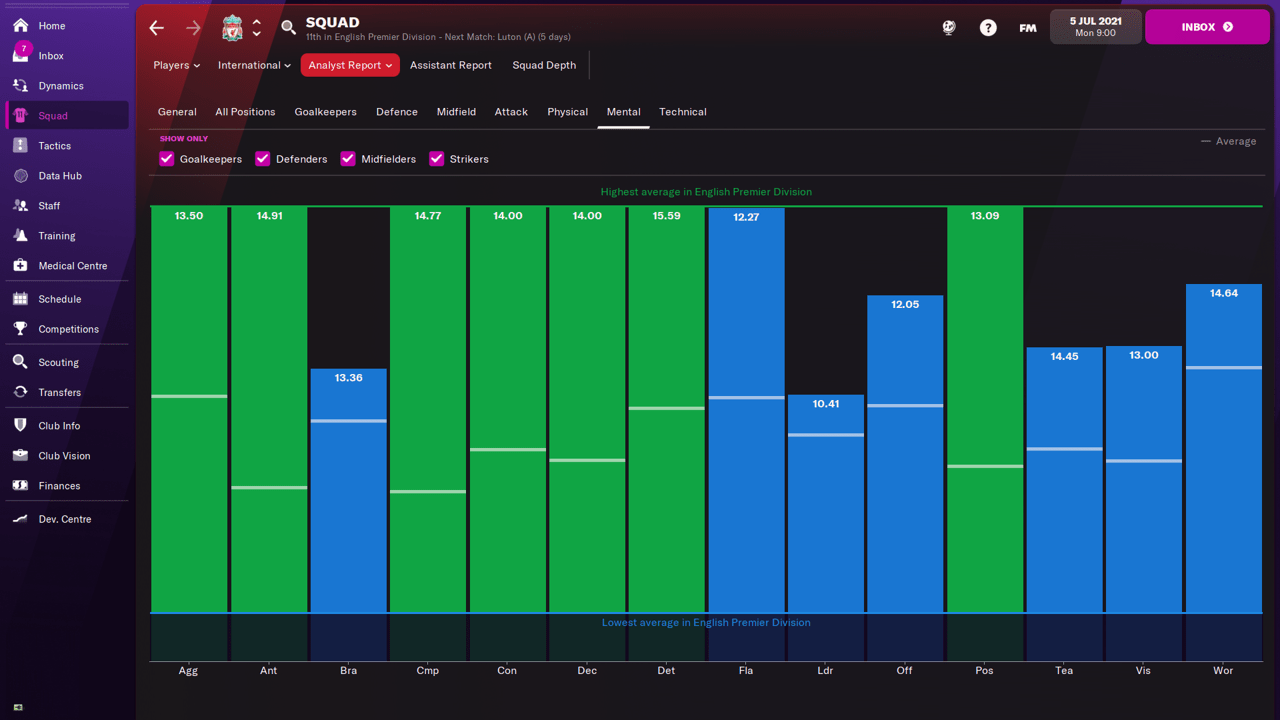 In terms of mental attributes, Liverpool have the highest average in several areas when compared to the rest of the Premier League – hence the real-life term that has stuck with them: the mentality monsters – even if the title itself does have a cringe-worthy factor to it. Excelling in these kinds of areas we see above can be vital in difficult games/phases as they will show fight and determination, as well as being composed in crucial moments. They do, however, lack leadership in comparison to the rest of the Premier League. Outside of van Dijk, James Milner, and Jordan Henderson, you are really struggling for someone who shows strong captain qualities on a consistent basis. Having said this, Liverpool’s average leadership rating does rank above the Premier League average, so it cannot be classed as poor. 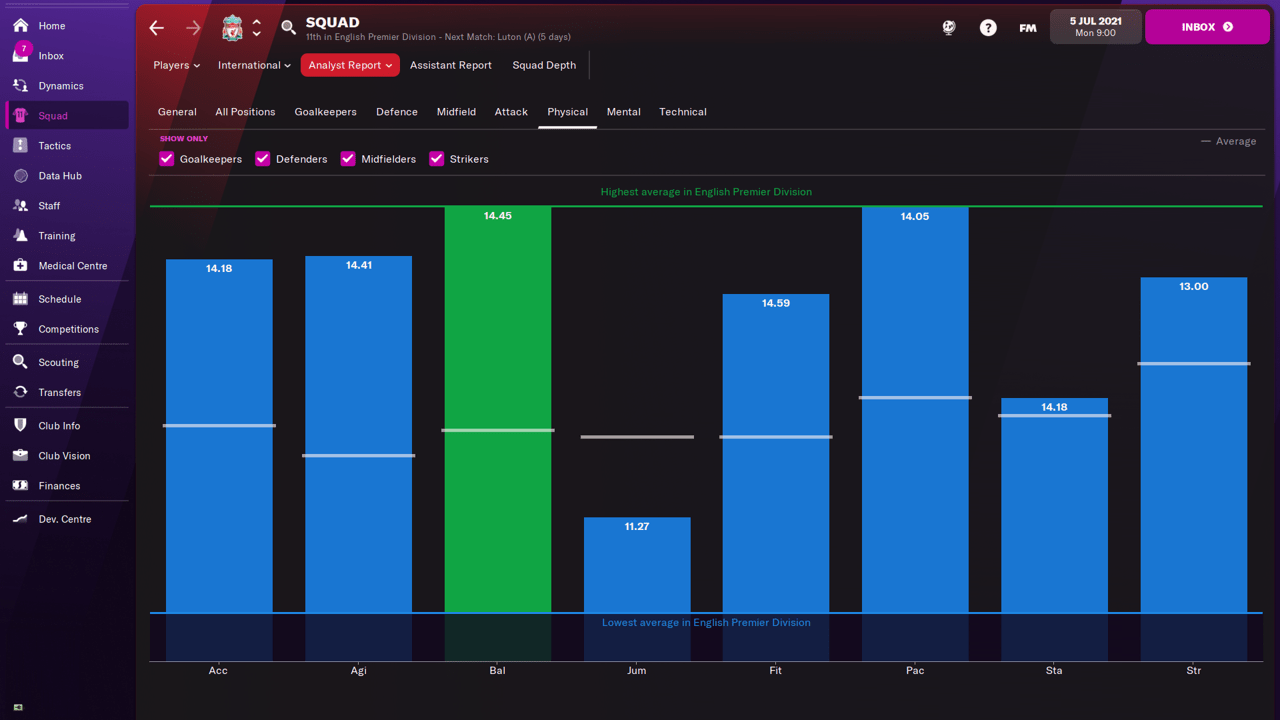 Liverpool aren’t known for their size and physicality as a team, which is reflected in the above image. Aside from showing exceptional balance throughout the team and having one of the quickest teams in the entire division, they may struggle against especially physical and tall teams who like to utilise aerial tactics.

There are also young players who will benefit from game time, or maybe even a loan move. Calvin Ramsey, Harvey Elliot, Fabio Carvahlo, and a host of academy prospects would fall into this category. In this respect, each player may benefit from different decisions. For example, high potential players under the age of 18 should be allowed to develop at the club’s academy, with the possibility of playing for the reserves. Some players between the 18-20 age range may benefit from a loan move if they aren’t yet ready to make the step up to the first team, while young stars around 20-23 will benefit greatly from sporadic first-team appearances with some games for the reserves as well.

It is no secret that Liverpool have one of the best goalkeepers in world football in Alisson Becker. Since his arrival to the Premier League, he has been consistently reliable for Jürgen Klopp’s side, and his attributes on FM22 reflect that – and we expect it to be reflected in FM23 as well. As mentioned above, Liverpool’s backup keeper situation isn’t the strongest, and we may look to bring in a fresh face in that area in FM 23. Below, we compare Liverpool’s goalkeeper unit to that of the rest of the division. 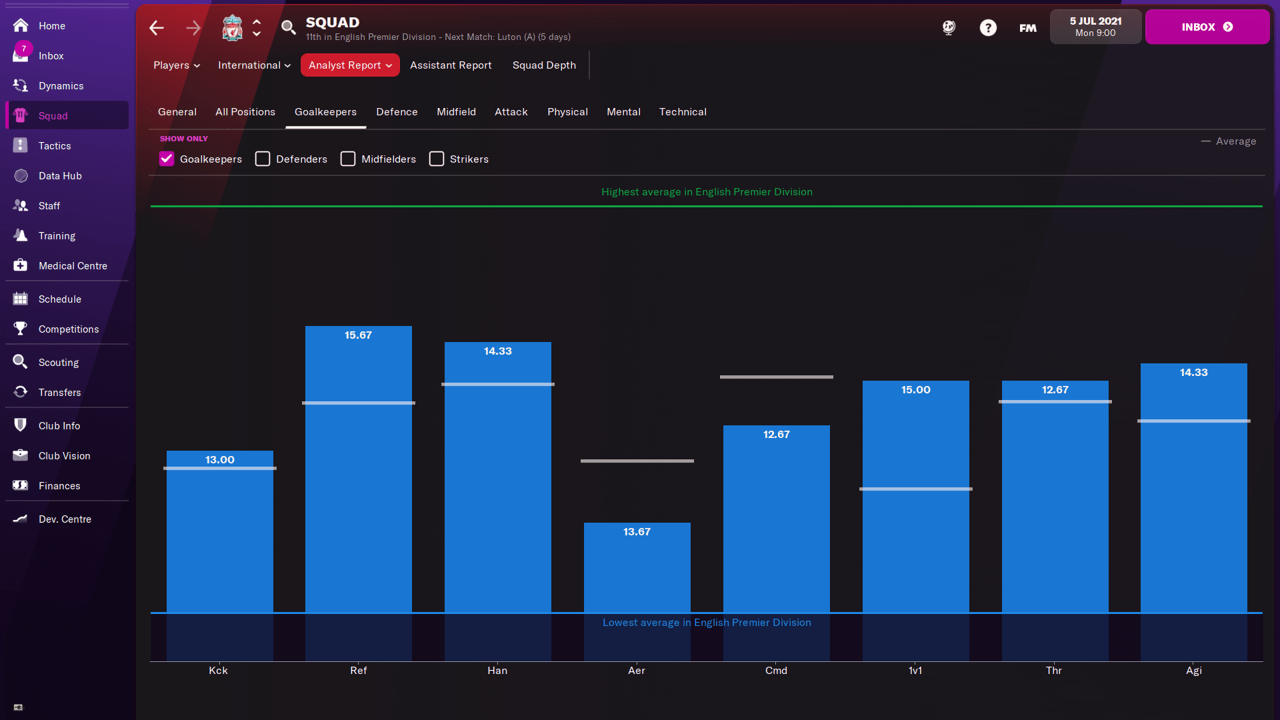 As you can see, as a unit, Liverpool’s goalkeeper unit does not excel. They have one of the lowest average attribute rankings for aerial reach ability at 13.67 and score below average on attributes for commanding the area at 12.67. Once again, investing in a higher-quality backup keeper will help boost this area for the Reds.

Before Klopp’s reign, there were question marks about Liverpool’s defensive capabilities, and this carried on into the German’s early years at the club. While their back line has been considerably stronger in recent years, some question marks still loom – can Trent actually defend? Is Joe Gomez really good enough to play at this level? Below is a comparison of the quality of Liverpool’s defenders against the rest of the League. 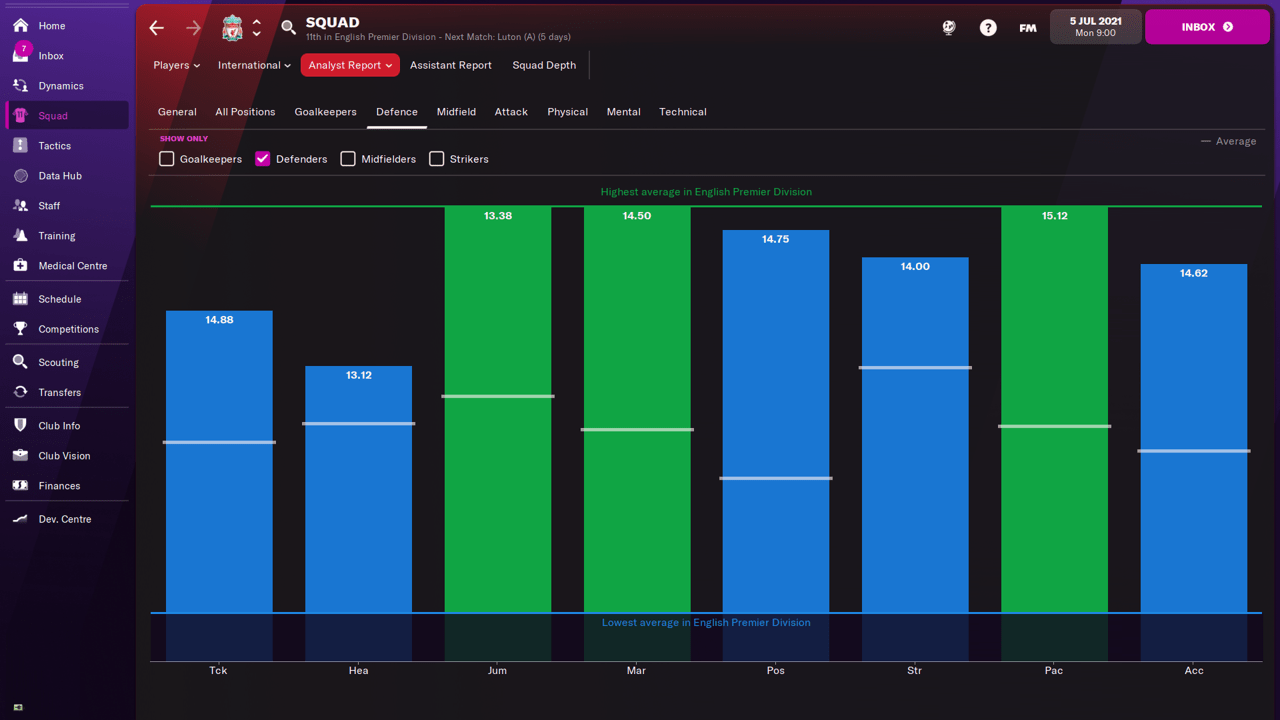 Straight away we can see that Liverpool have some exceptional talent in the defensive quarters, boasting the highest league average for attributes like jumping, marking, and pace. There are no real areas for concern either, with the Reds beating the average on every defensive attribute. Their lowest average, however, is heading – this loops back to the discussion made about a lack of physicality and height in the squad.

An area that has faced some scrutiny, particularly since the departure of Gini Wijnaldum, is Liverpool’s midfield. There has been a constant outcry for an attacking creative midfielder to come into the fold for some years now – the fans seem to want somebody like Phillipe Coutinho to fill the role. However, Klopp’s set-up and shape in midfield does not warrant a midfielder that will be so far forward as Liverpool rarely play through the centre and have good quality for build-up play in the flanks. The league comparison below will provide an insight to the level the midfield is currently at. 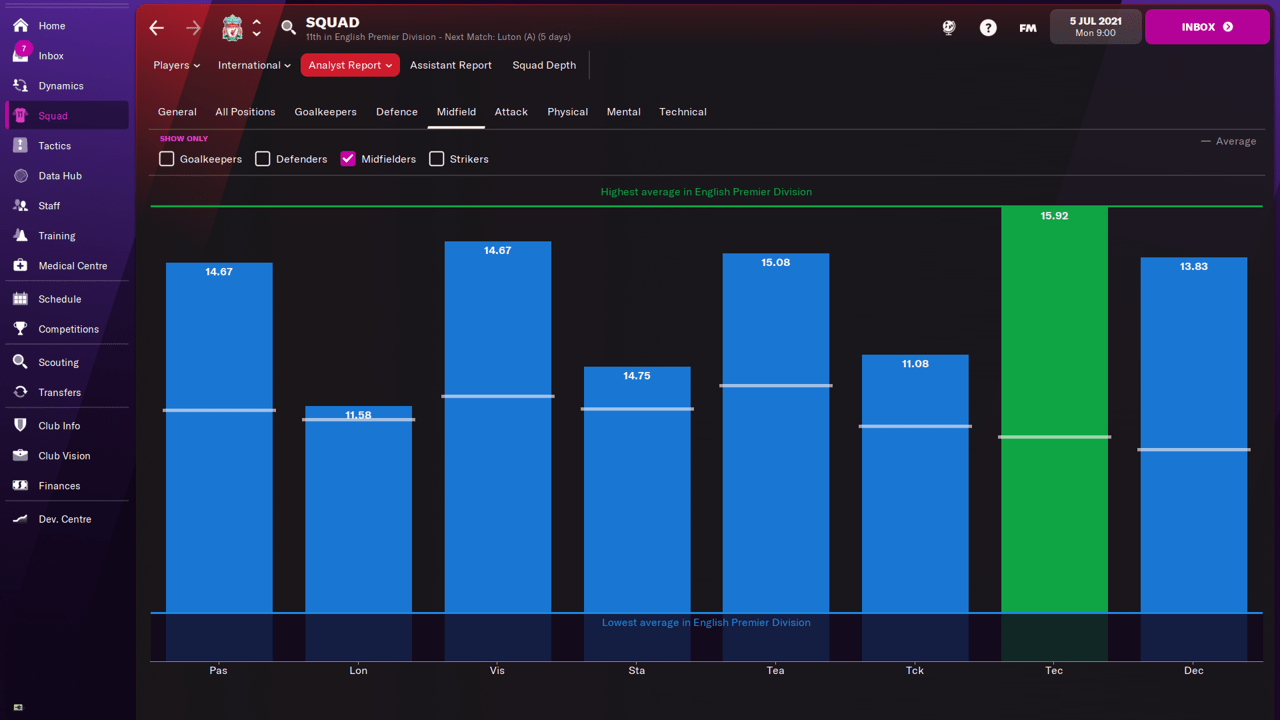 Defensively, Liverpool are solid in midfield, proven by having the above-average tackling attributes in the league – players like Fabinho, James Milner, and Jordan Henderson help this. Stamina is only just above the league average, which may be surprising at first given Liverpool’s intense style of play, but when you consider there are players in the squad like Thiago who aren’t known for their engine, it becomes clearer.

In terms of technique, Liverpool boast the highest average in the league for midfield units. Players like Thiago, Keita, and Oxlade-Chamberlain all make significant contributions to this area. The Reds also rank nicely in attributes like passing, vision, and teamwork – key elements to consider when building your own tactic on Football Manager.

Perhaps the area that needs zero changes (depending on how you want to play the game and which tactics you deploy) is Liverpool’s attacking unit. Since the Klopp era began, Liverpool have been one of the most feared teams to defend against. For years, the trio of Mane, Salah, and Firmino scored for fun against Premier League defences. Now, with Mane no longer at the club and Firmino arguably past his peak, it’s time for fresh blood in the front line. Players like Diogo Jota, Luis Diaz, and Darwin Núñez all add some serious firepower up front. It would be a wise decision to bring in a backup forward – ideally somebody versatile who can play as a striker and a winger as this gives you more depth. Another option would be to go into the market to find a replacement for Mane – something we will cover in the near future. 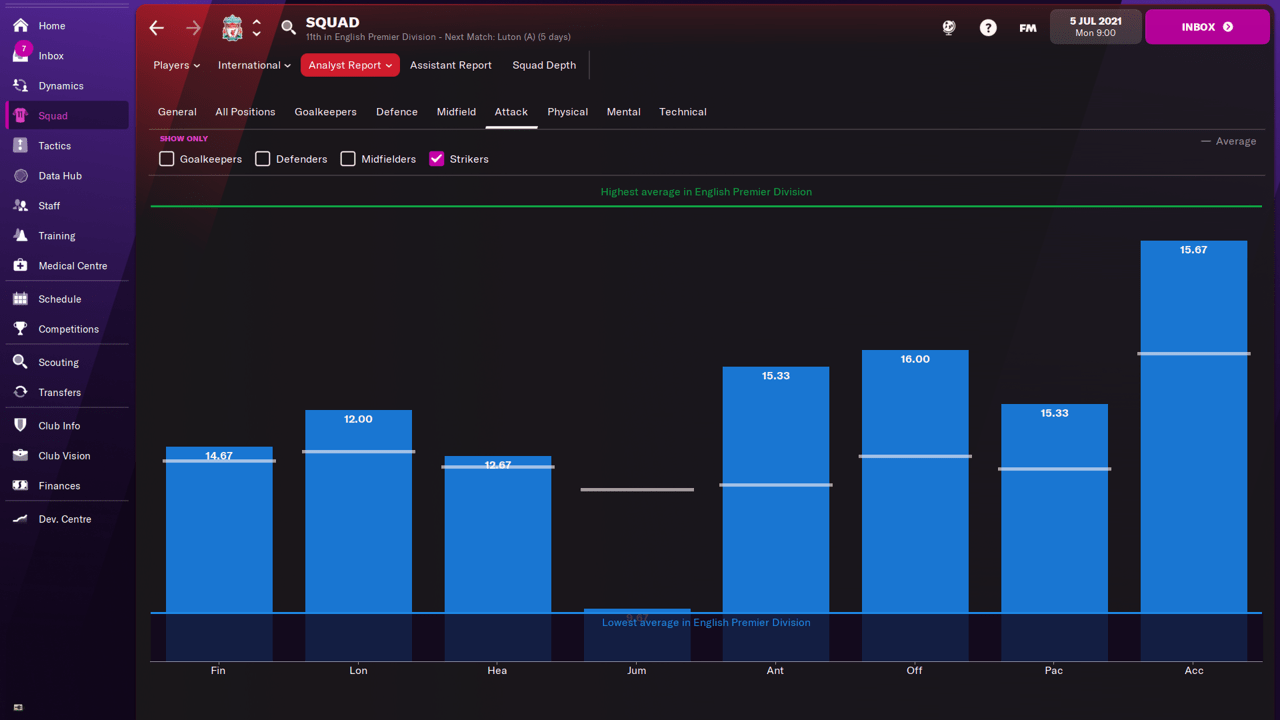 The lack of an aerial threat is something that may be addressed – while Liverpool don’t rely on it in the real world, the presence of a more physical striker on FM can sometimes work wonders against certain opposition. Many of Liverpool’s forward players are yet to reach their peak, so they will only develop further, so despite some of their averages being just slightly above the league average, there is no real cause for concern.

Liverpool’s squad is an interesting one. In some areas, there are young talents with all the potential in the world. In others – already established top-level talents. But there are also players at the club who some would consider “dead wood” and could be moved on for sizeable fees. There is plenty of versatility in this squad, so if you were to take over as Liverpool boss on Football Manager, there is a strong potential to be successful via a number of tactical methods.

This makes it the cheapest price around!