Liverpool signed Uruguayan striker Darwin Nunez from Benfica. The Reds faced a lot of competition from English Premier League rival clubs and other European clubs. Darwin Nunez made his name last season by performing consistently at the top level, especially in the UEFA Champions League. Liverpool also needed a replacement for Sadio Mane and they wanted a proper number nine in place of the Senegalese. Darwin Nunez made an excellent start to his Liverpool career by scoring a goal in their FA Community Shield match against Manchester City. This was followed by a goal and an assist in his debut match in the English Premier League. The 23-year-old came off the bench and made two goalscoring contributions. However, this was followed by a bad phase where he received a red card against Crystal Palace and missed three games. He hasn’t made any goal contributions since then. We now look at some of the stats that highlight his performances in his first season at Liverpool. 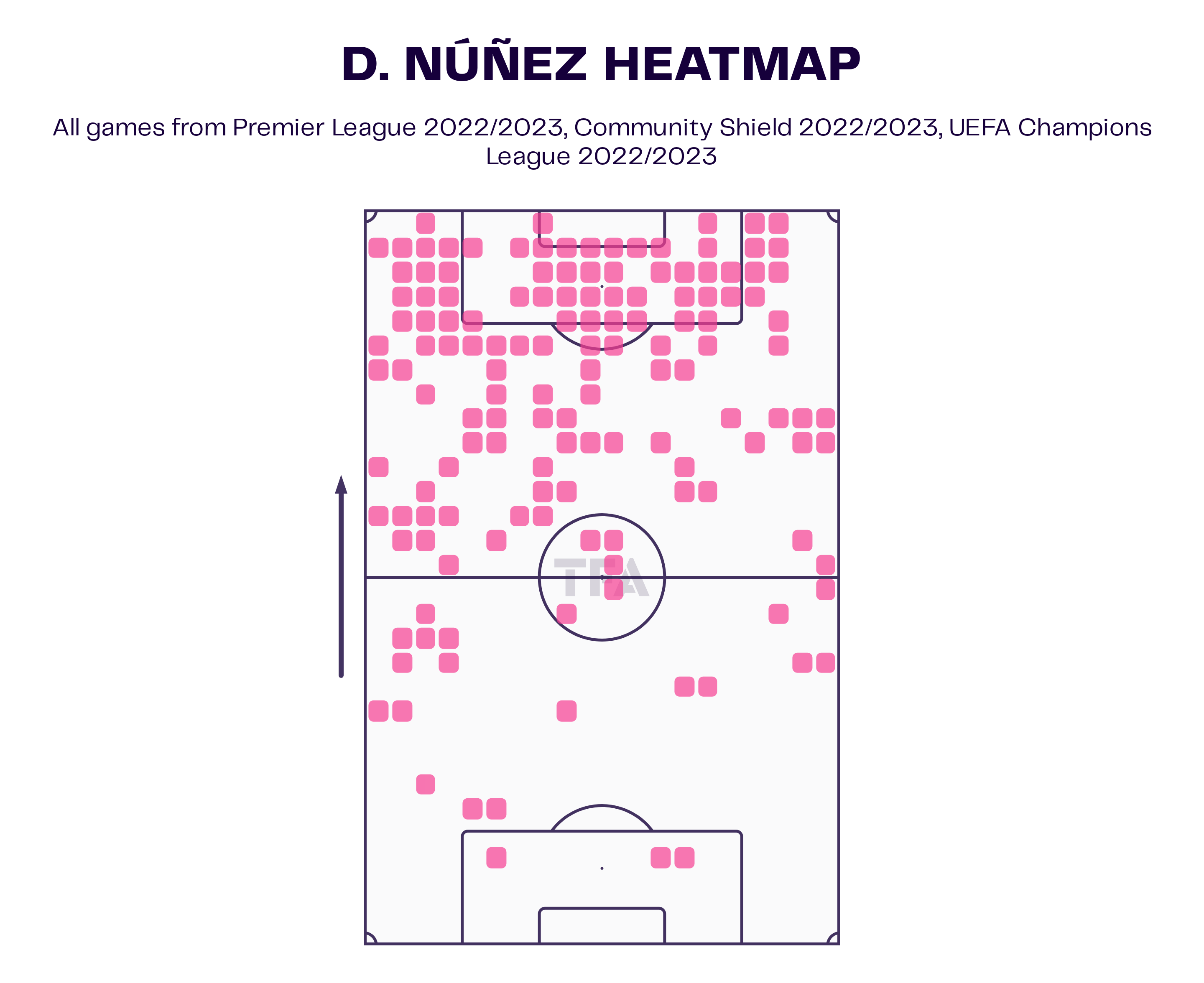 Darwin Nunez has spent 287 minutes on the pitch for Liverpool this season. He has made six appearances, including two starts. A total of three appearances came in the English Premier League, two in the UEFA Champions League and one in the debut match in the FA Community Shield. The above viz shows that Darwin Nunez likes to drift towards the left side. He averages 9.72 touches per 90 minutes inside the opposition penalty box, and that is a big positive for the Reds. 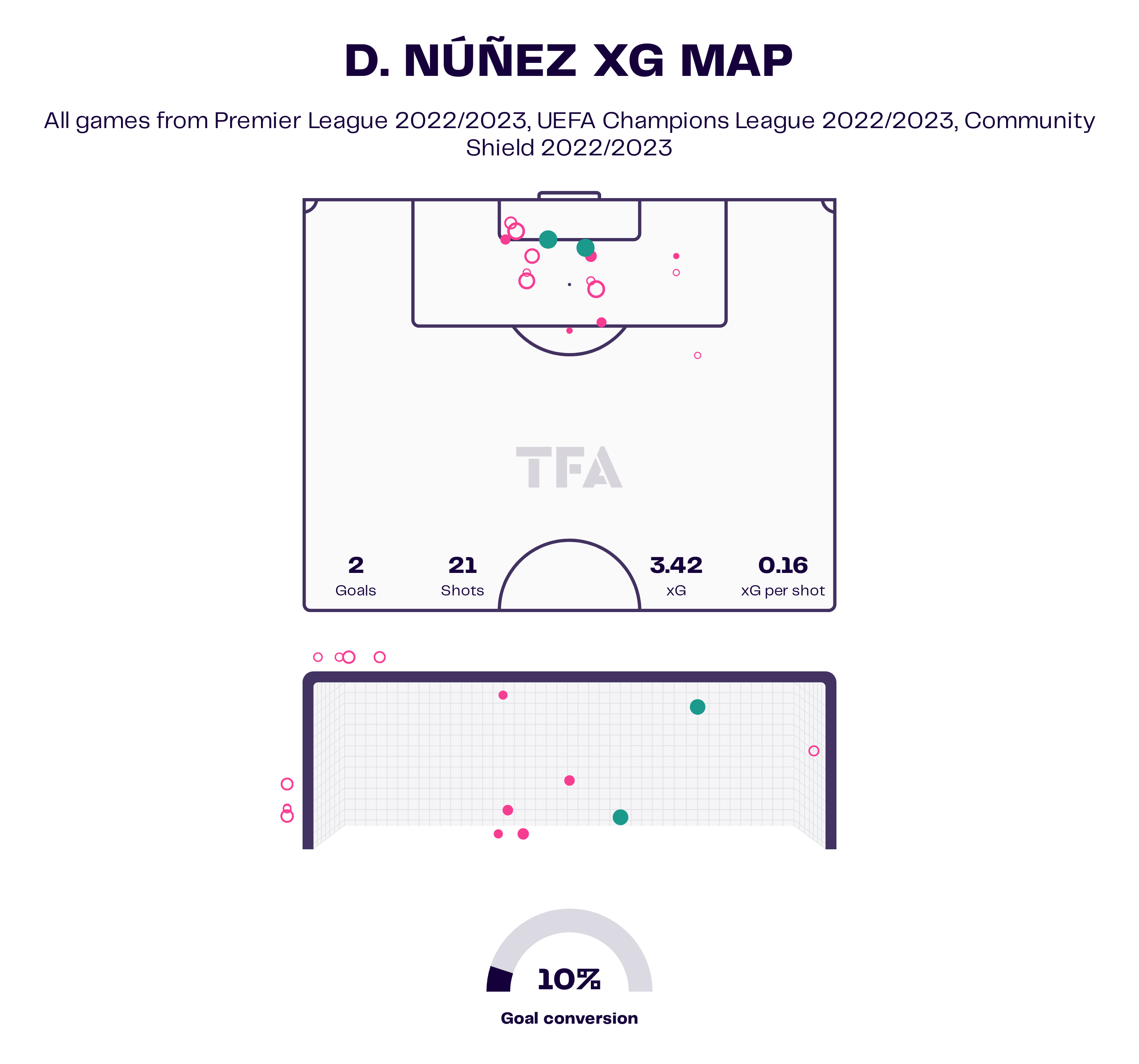 Darwin Nunez was brought to Liverpool to score goals. With the number of minutes spent on the field, he averages 0.63 goals per 90 minutes. The above viz shows the shot map and the xG rate of the player. The 23-year-old has attempted 21 shots in all competitions, with a 33.33% shot accuracy rate. Nunez likes to make far-post runs on crosses and takes a high leap to get his head on the ball. However, he has failed to capitalise on most of the opportunities and that is the reason behind his low success rate. The striker has a high xG rate and will look to convert more opportunities in the future to cement his place in the starting 11. 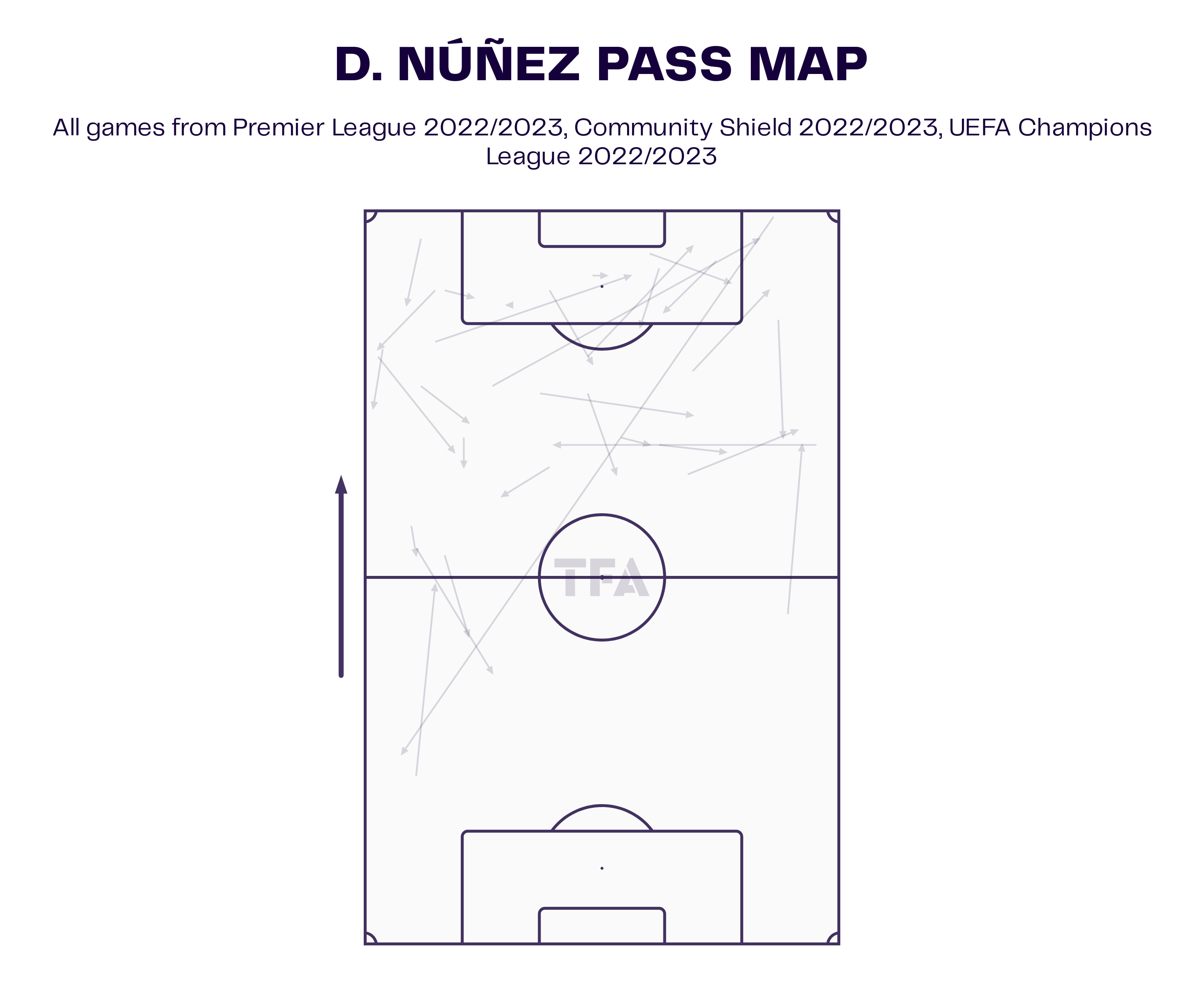 Darwin Nunez’s passing hasn’t been that much effective but he is starting to link with his new teammates. The forward already has an assist to his name. He averages 14.4 passes per 90 minutes, with a low accuracy rate of 67.4%. Jurgen Klopp will look for a room of improvement from his player in this department.

Darwin Nunez is starting to settle in the red jersey at Liverpool. He is still adapting to the tactics and might take some time to become a regular under Jurgen Klopp. Nunez needs to improve his shooting accuracy and link-up play. Liverpool fans have a lot of expectations from their new striker.