For six incredible seasons, Sadio Mané was at the forefront of Liverpool’s goal-machine of an attack and was a key figure in their success in that timespan. Arriving from Southampton in 2016 for £36.5m from fellow Premier League club Southampton, the Senegal international hit the ground running and became an instant fan-favourite of the Anfield faithful. Fast forward to the back end of the 2021/22 season and news broke of Mané’s transfer to Bayern Munich, there were mixed opinions. Some weren’t too bothered as they believed Mané was past his best, others were confident that Liverpool had a ready-made replacement in Luis Diaz and/or Diogo Jota, and some were worried that the Reds had just lost an essential part of their team.

Everyone who has ever played FM knows the pain of losing a key player and having no/little control over it, and it can really be a setback, especially if you fail to find a suitable replacement. This article will assess the potential options available in replacing Sadio Mané in Football Manager 2023, using FM22. We will look at players already at Liverpool’s disposal as well as dipping into the transfer market to discuss potential buys.

As mentioned, Mané was one of the most important pieces in Klopp’s puzzle. He brought consistency and quality in bucket loads while coming up with a good number of important goals along the way. His pace and dribbling are two of his top assets, so any replacement should excel in those areas as we are looking for an aggressive winger rather than a wide playmaker. 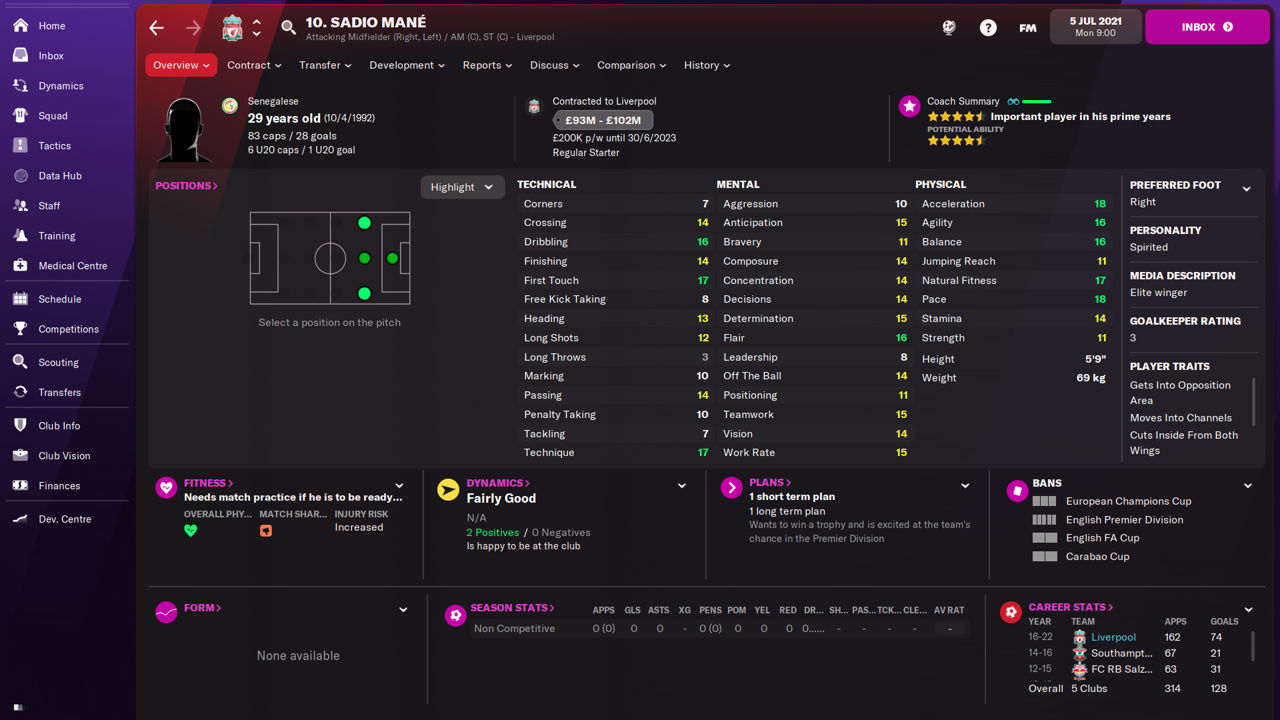 Positionally, Mané was extremely versatile; competent in a number of positions that included striker, attacking midfielder, and winger on either side. Top attributes like pace (18), first touch (17), technique (17), and dribbling (16) make him extremely dangerous in a multitude of attacking situations. Player traits like “gets into opposition area”, “moves into channels”, and “cuts inside from both wings” highlights his ability to exploit and attack space with great offensive intent. 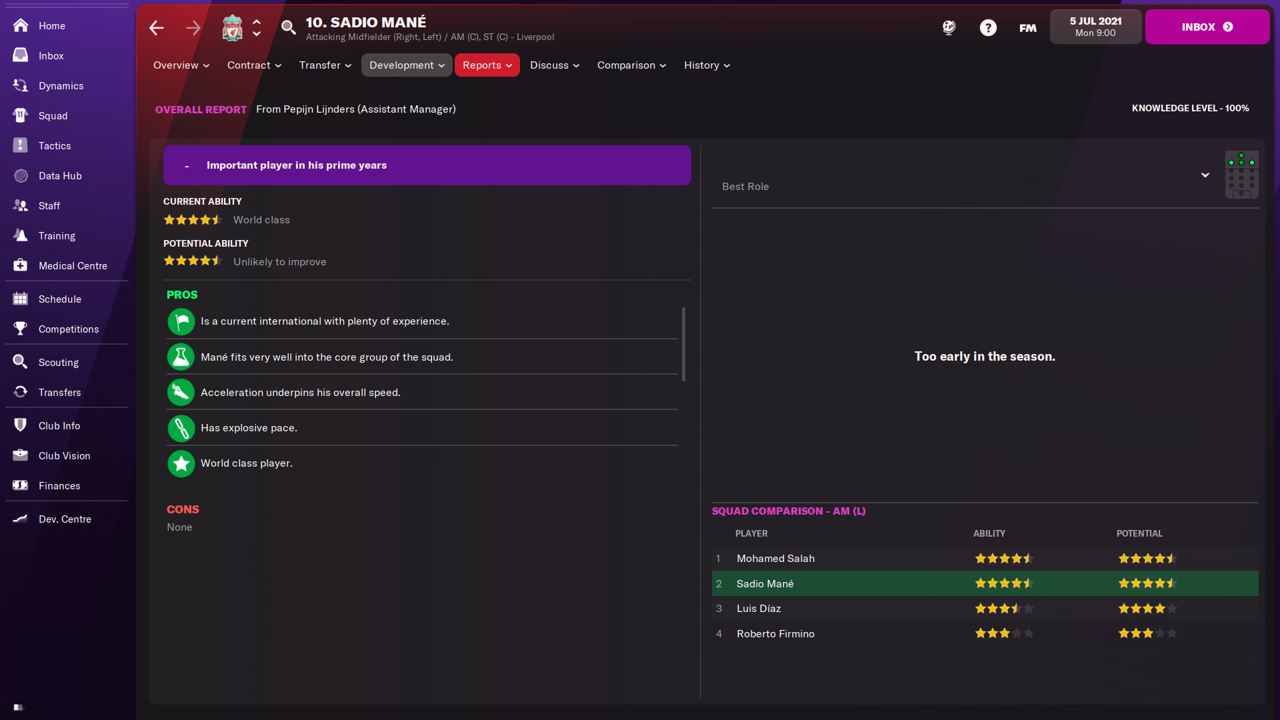 When we look into reports on Mané, we get an even clearer idea of his quality. At 4.5 stars CA/PA, he is listed as a world-class talent, on par with Mo Salah. His list of pros includes his explosive pace and acceleration, while he also boasts assets in other areas like fitting in with the core group of the squad – an important aspect that increases teamwork and helps him to flourish in line with squad tactics and instructions.

In Football Manager 2022, Liverpool’s transfer budget is £24m at the start of a new game, and it could be around the same figure in FM23, if not lower. This significantly limits the possibility to sign a replacement in the first transfer window, so it would be wise to utilise the players already at your disposal as Liverpool manager. 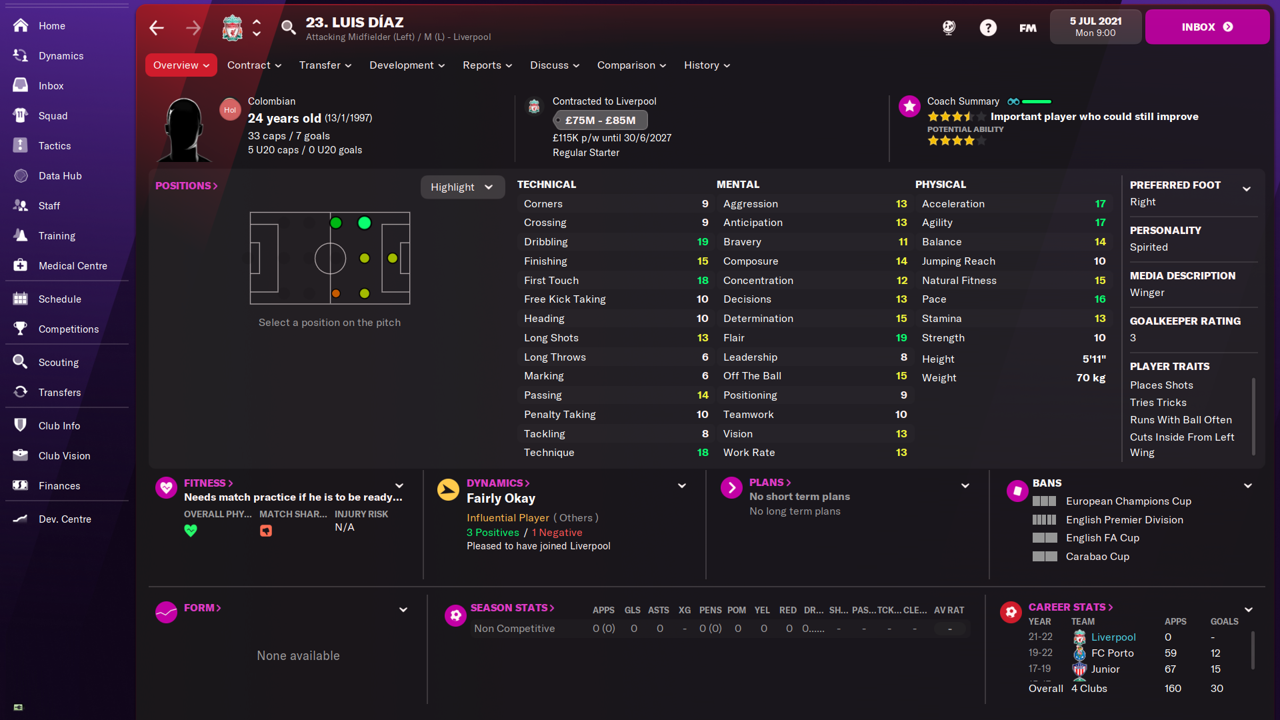 The first option that springs to mind is Luis Díaz, a player who, like Mané did, has captured the hearts and imagination of the Anfield faithful with his impressive performances and moments of flair. Attributes like dribbling (19), first touch (18), and technique (18) see him excel Mané in those specific areas, with similar pace stats as well. It is the other corners of Díaz’s game that limit him from being on the same level as Mané for now, but at 25 years of age, he still has a couple of seasons to develop and become a world-class player. His CA/PA in FM22 was 3.5/4* so he definitely has the ability and potential to be a key Liverpool player for years to come. 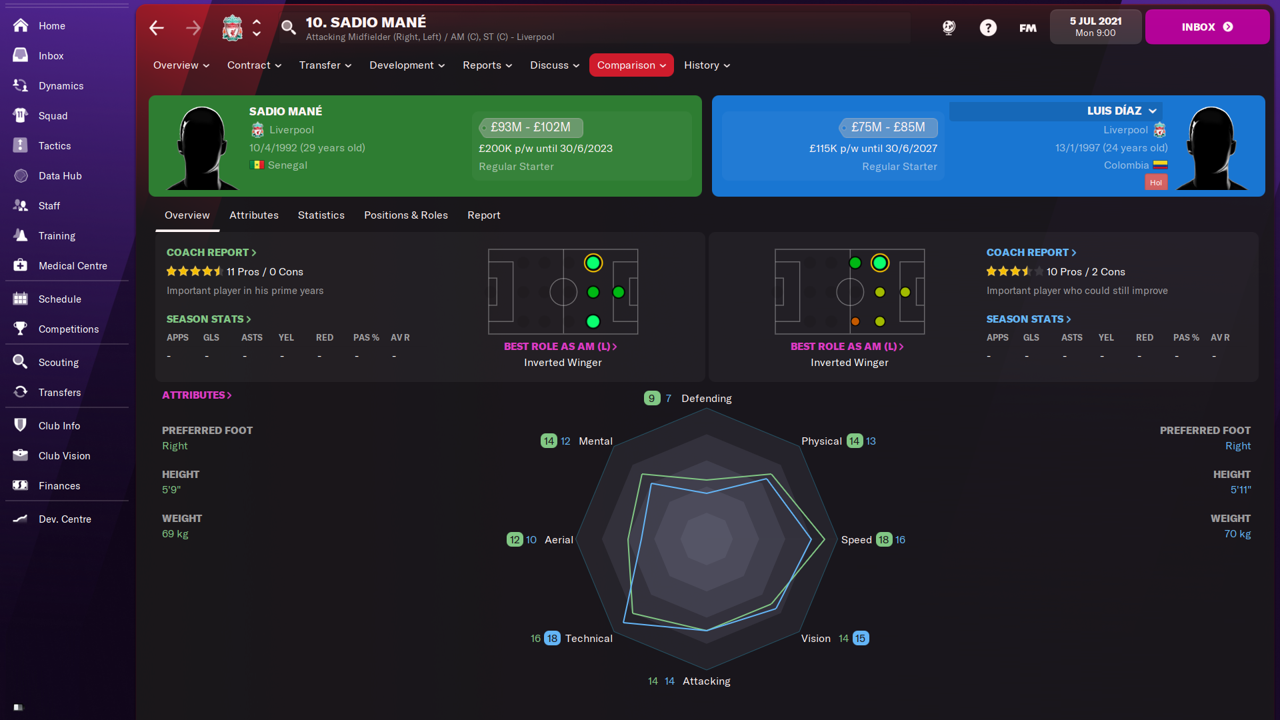 In a direct comparison to Sadio Mané, we can get a clearer idea of Díaz’s strengths. Again, it is important to remember that Mané is a player who has already reached his peak, while Díaz’s peak years are still yet to come. Mané betters the Colombian in several areas such as mental and physical attributes and is just slightly quicker. However, Díaz’s dribbling, vision, physicality, and general attacking ability are all very strong, making him a serious contender to fill Mané’s boots in that left-winger spot. 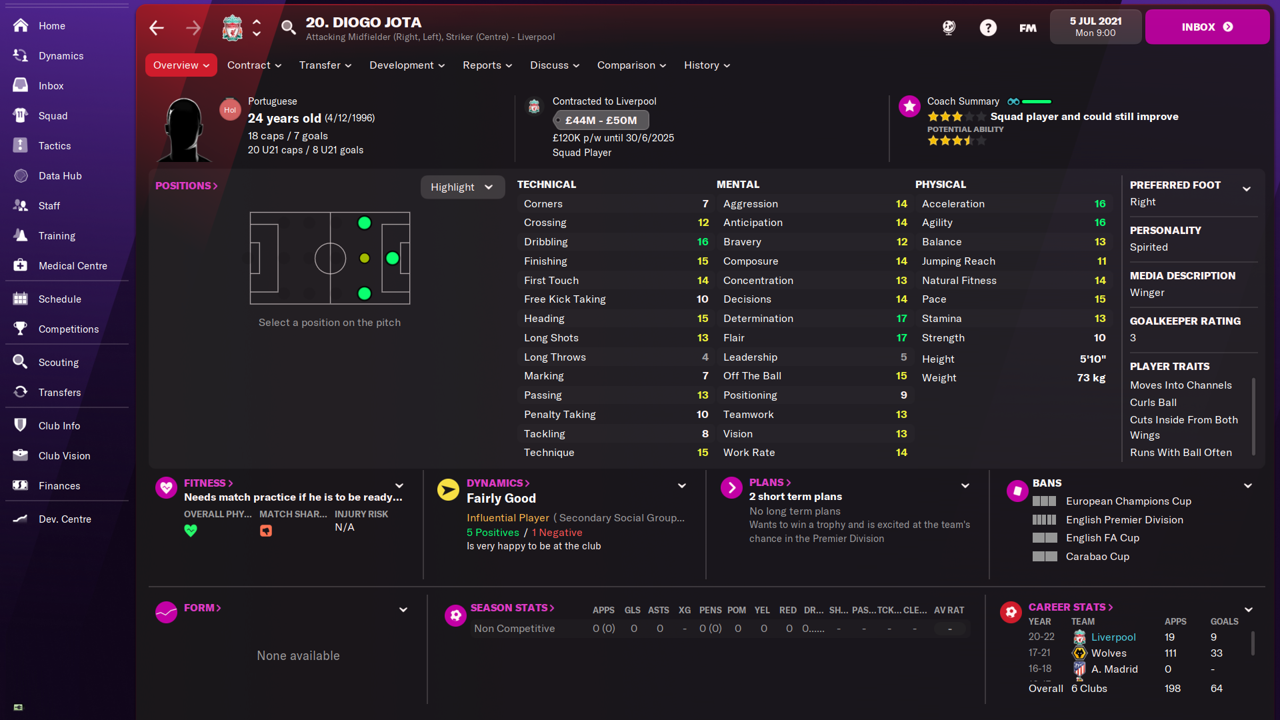 The other option already at the club is 25-year-old Diogo Jota, who enjoyed a strong start to life at Liverpool and is another player who quickly became popular with the fans thanks to his attacking ability and impressive work rate. While he isn’t blessed with the blistering pace of Mané, he is still quick enough to cause some damage thanks to his high dribbling (16), technique (15), and flair (17). He also possesses strong versatility and is able to play centrally as a striker or attacking midfielder, while also being a natural on either flank. On FM22, his CA/PA was 3/3.5*, and while this may be higher on FM23, it is an indication that he shouldn’t be the first-choice winger over a long period of time. 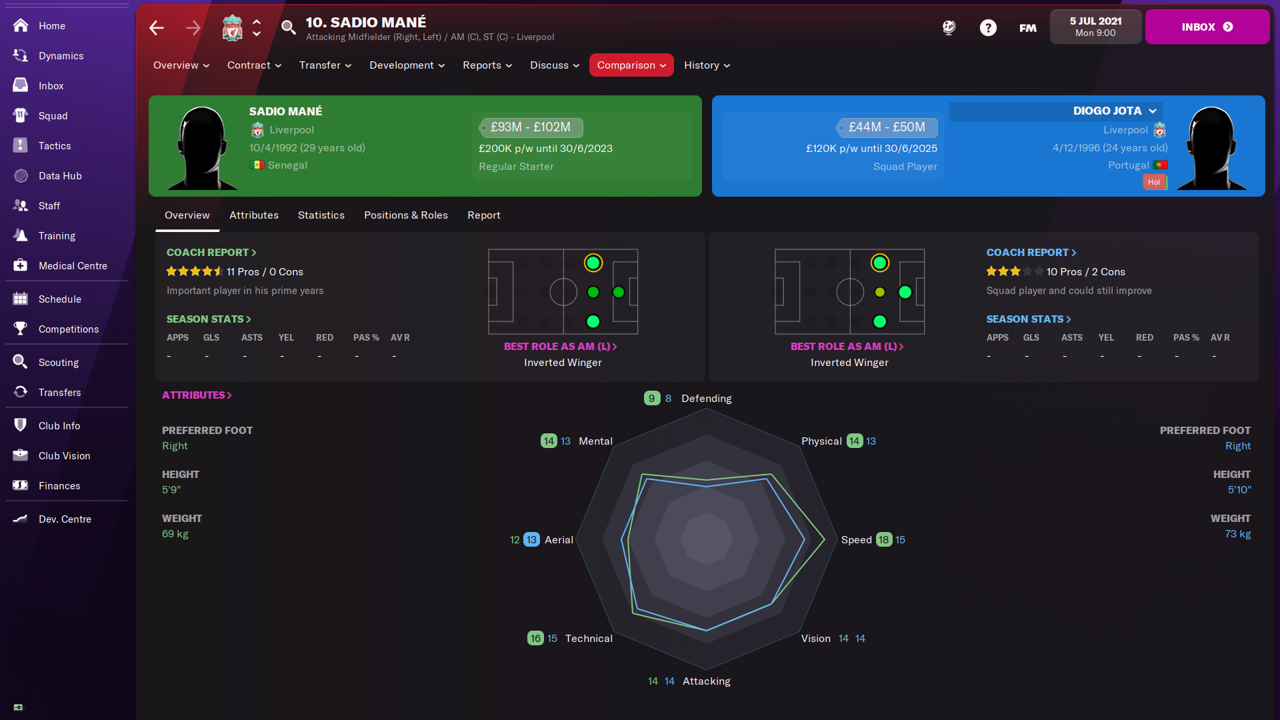 When compared to Mané in key areas, Jota looks stronger than his CA/PA and attributes suggest. Jota only betters Mané in one particular area – aerial. Jota has displayed a strong aerial game in a Liverpool shirt, especially for a player of his size, and matches the Senegal international in areas like vision and overall attacking. He also comes close to matching Mané in areas like technicality, physicality, and mentality. These observations suggest that Jota could still play a key role over the course of the season, especially with the Reds participating in Europe, meaning squad depth is essential.

Bringing in a fresh face

We’ve just made the point that squad depth is key when managing a club playing in European competitions, so opting to sign a new player to fill the void left by Mané is also a smart option. The issue of the transfer budget, or lack thereof, can be avoided by selling some players who have high transfer values and high wages i.e., Naby Keita, Alex Oxlade-Chamberlain etc. (see our squad assessment article here to read more about this). Using transfer options like monthly instalments or player trades can also be extremely helpful, depending on the player you are looking to sign and the club they are contracted to. Below is a list of a small number of possible realistic transfer targets. 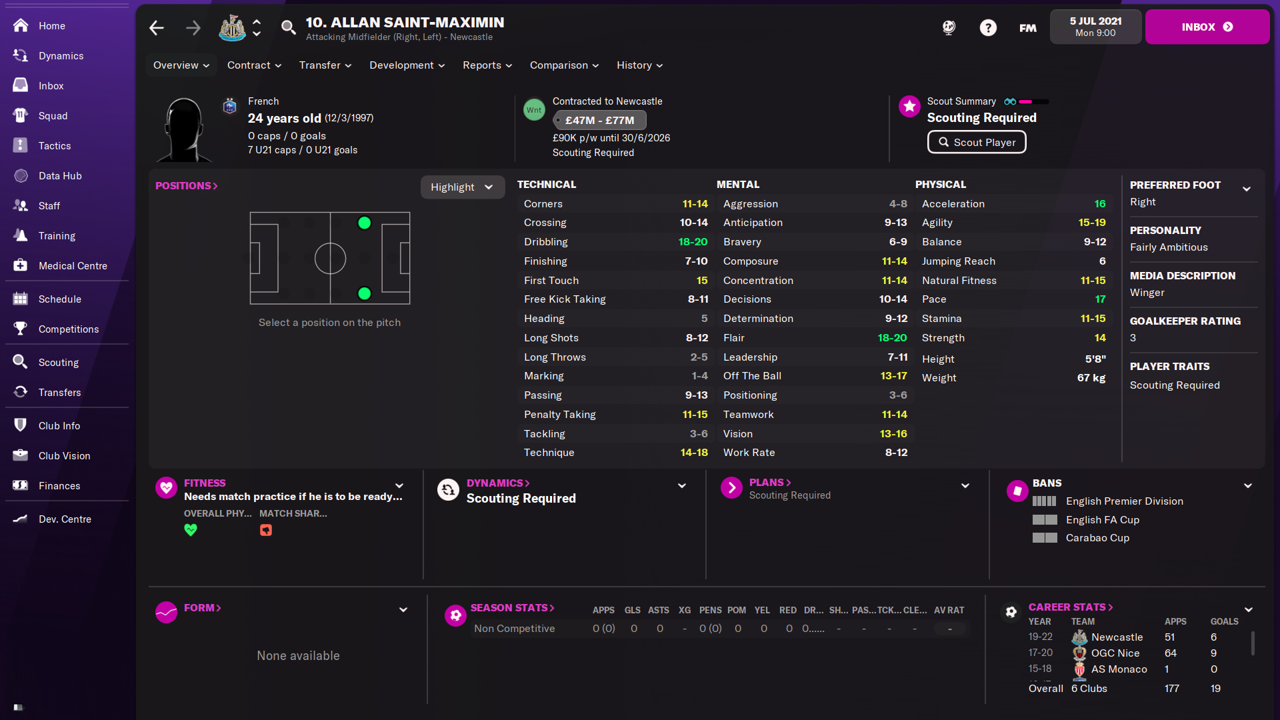 A player who has been linked with a variety of Champions League clubs is Allan Saint-Maximin. The Newcastle United winger has caught the eye of many since his arrival in the Premier League, producing several dazzling moments. The Frenchman is notably quick with high pace and acceleration attributes and possesses similar high abilities to Sadio Mané – dribbling, first touch, and technique. You would need to spend some time fully scouting Saint-Maximin to get a more accurate idea of his ability if you didn’t want to risk splashing the cash early on. His estimated transfer value lies between £47m-£77m, and earns £90k p/w, making him a realistic transfer in terms of finances. One stumbling block in exploring this option is that he is yet to have reached a point in his career where he performs consistently and has so far failed to produce in the goals/assists side of the game. For the money you are going to spend, there could be safer, more reliable options available. 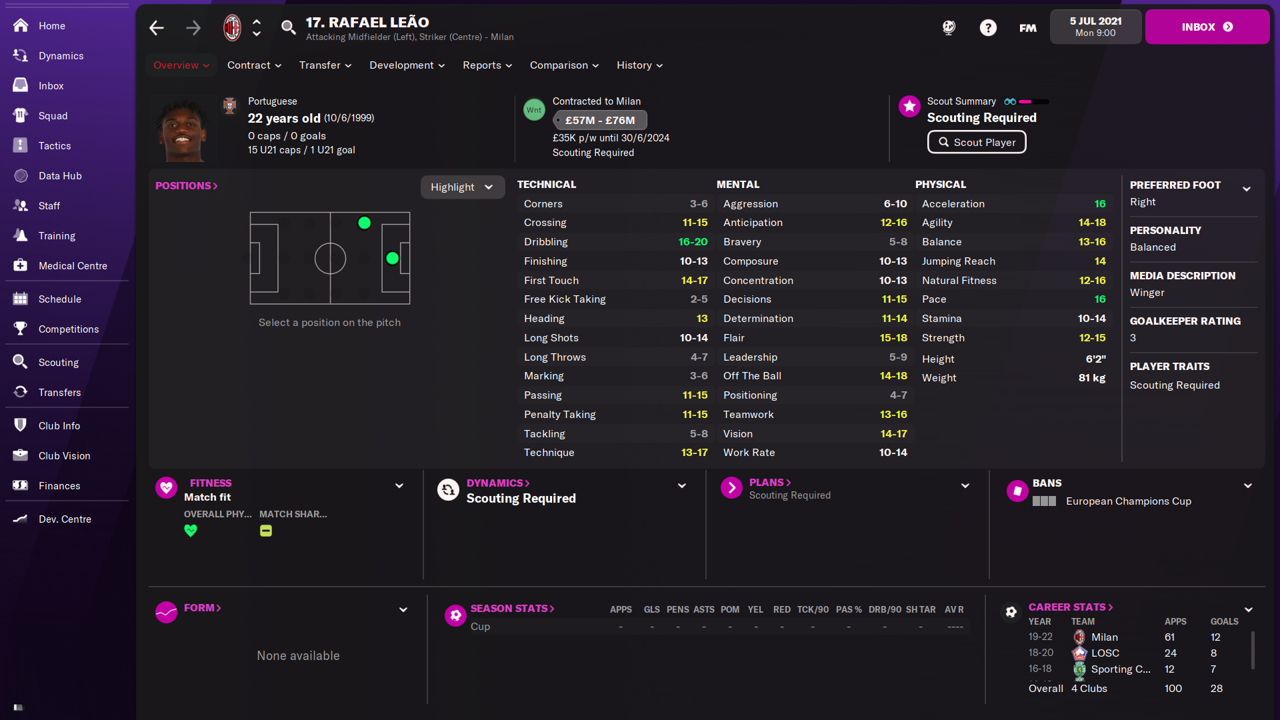 Another player who could fit the Liverpool mould and still has plenty of room for development is AC Milan’s Rafael Leão. At just 23 years old, he could be a signing that delivers the goods at a high level for the best part of a decade. Like Saint-Maximin, Leão requires more scouting to get a 100% accurate reading on the Portuguese winger’s ability, but the window of ability for key areas is promising. He excels in areas like dribbling, first touch, and technique. He also has a high flair attribute, along with other strong mental areas like off-the-ball work and vision. In line with the requirements of replacing Mané, Leão also possesses high-speed attributes, which is impressive considering his height of 6”2” – making him an aerial threat too. Able to play on the left flank or as a striker, he would be a smart signing if you can raise the funds to meet his estimated transfer fee of £57m-£76m which may be even higher in FM23. 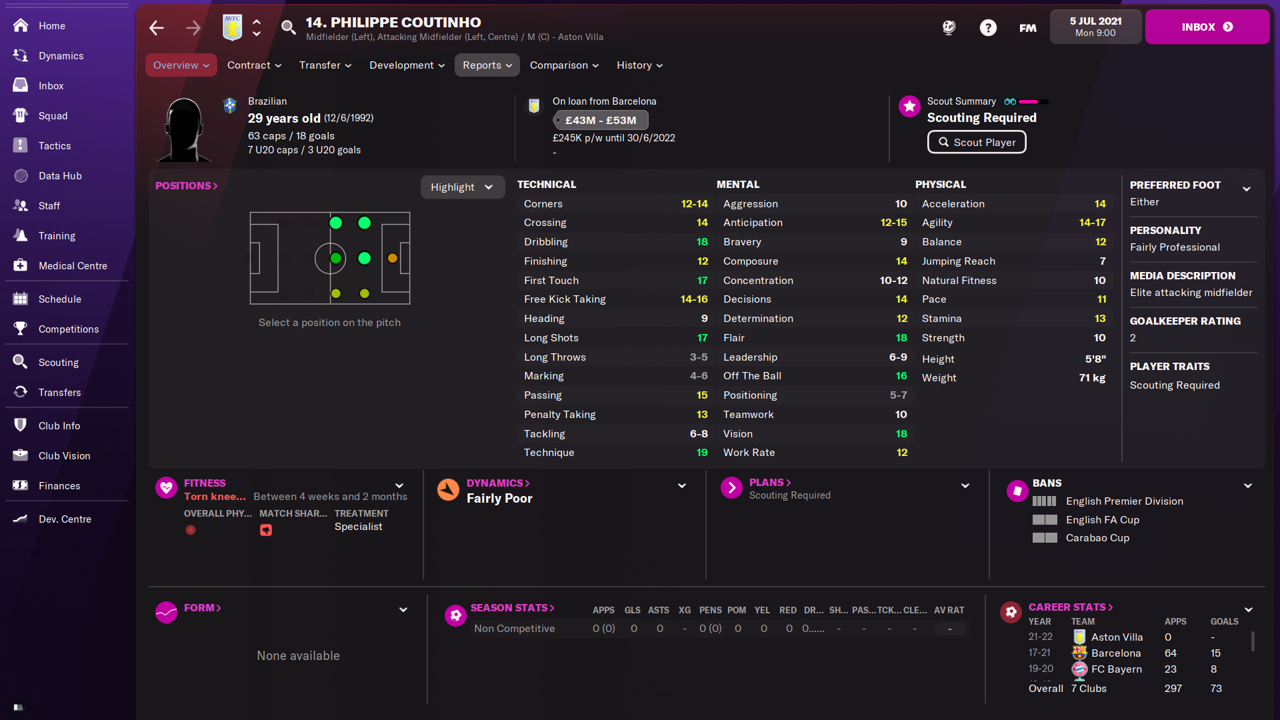 One final option that ticks most of the attribute boxes is something of a curveball, but everyone who plays FM is partial to a nostalgia signing every now and then! Phillipe Coutinho is, to this day even, a fan favourite. While many fans felt betrayed by his departure in 2017, he is still admired by Liverpool fans for the amazing memories he produced. At 29 years old, the Brazilian is in his peak years and possesses an array of high technical attributes. While he has decent acceleration, his general pace lets him down when compared to the other mentioned options. However, his dribbling, technique, flair, and agility all equip him well enough to beat players in the final third without the need to use raw pace. His estimated price tag in FM22 was £43m-£53m and comes with an exceptionally high weekly wage – something to consider when you will likely only get two or three good seasons out of him. There are some pros and cons to this option, but it would certainly go down well with the fans.

The left winger position isn’t an area of concern by any means, even without Sadio Mané, but the departure of a key player should always be followed by an assessment and exploration of the possibilities going forward. Either you save your budget and place trust in the players already in the squad as they certainly do have the ability, or you look to splash the cash early in your reign as manager by bringing in a new name. Both options have their pros and cons, it simply comes down to the philosophy and needs of the manager in charge of the club. The three new options discussed are not necessarily the best three options available – there are many names that could also be considered, especially once some scouting has taken place. There was a theme with each player, though – each one excelled in areas like dribbling and technique, often with a strong first touch and flair. Pace is also an important factor, but as demonstrated by Coutinho, blistering pace isn’t always a necessity – especially when you already that in Luis Díaz.