With two viable first-team options in the Liverpool squad to partner Virgil van Dijk, Jurgen Klopp must decide whether to stick with his preferred centre-back partner Joel Matip or to twist with a younger but potentially riskier option in the squad. After the sensational return of Van Dijk to the Liverpool team, these next few seasons look to be a transition period for the defense. Klopp can use it as an opportunity to solidify the backline and find the next defensive partner to sit alongside the Dutch captain.

The current number two at Liverpool, and favored by Jurgen Klopp over the other two defenders, Joel Matip is arguably in the prime of his career, overperforming every time he steps onto the football pitch. At 6 feet 4 inches, Matip can be a presence at both ends of the pitch. 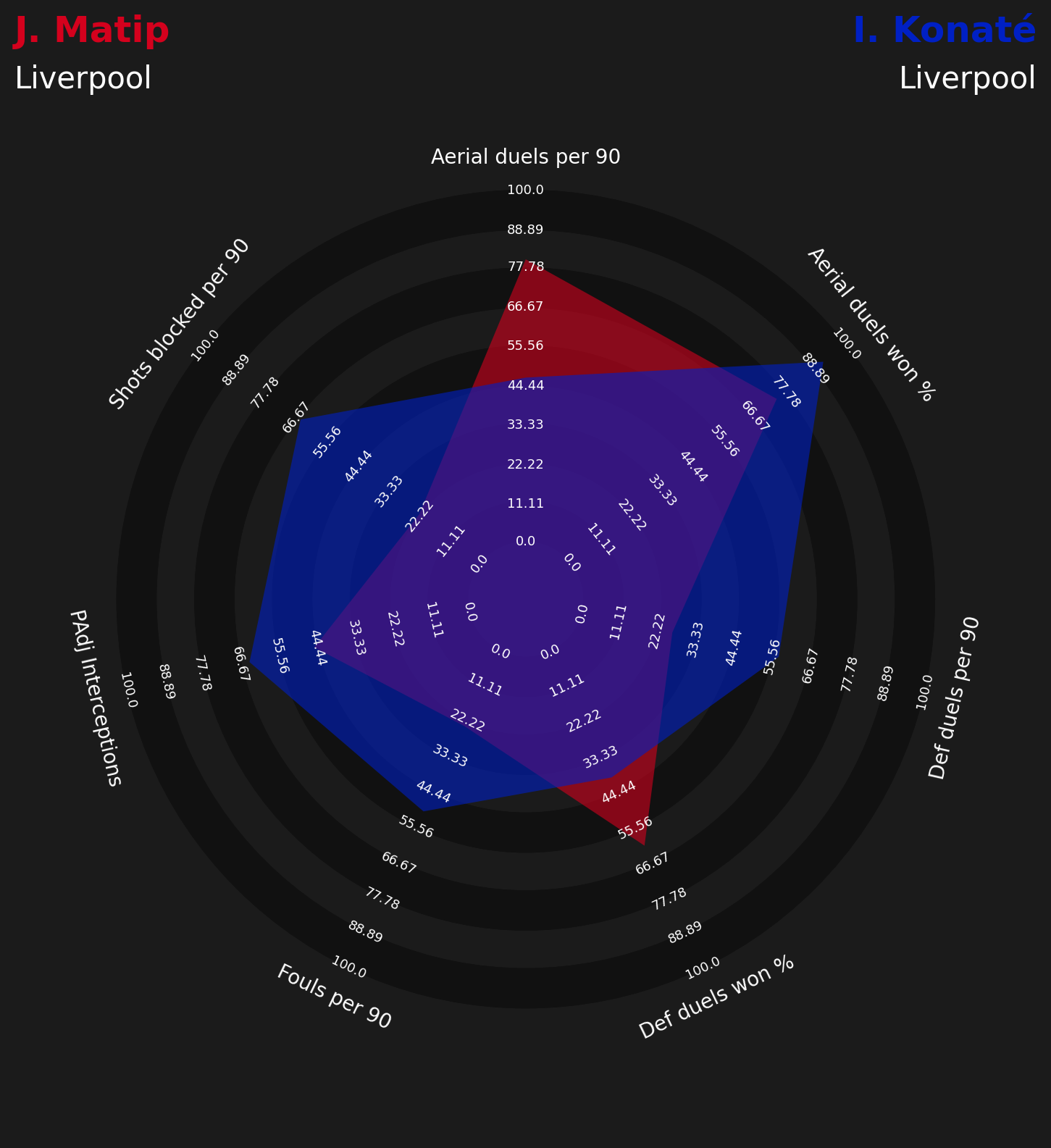 The above visual shows us the comparison between the defensive stats of Matip and Konate. The visual indicates that Konate has been a better defender and has a better success rate in completing his defensive actions. But, Konate has only made seven appearances in the Premier League, while Matip has featured in 21 games for Liverpool this season. Matip has a better success rate with defensive duels, whereas Konate is more successful in winning aerial duels. 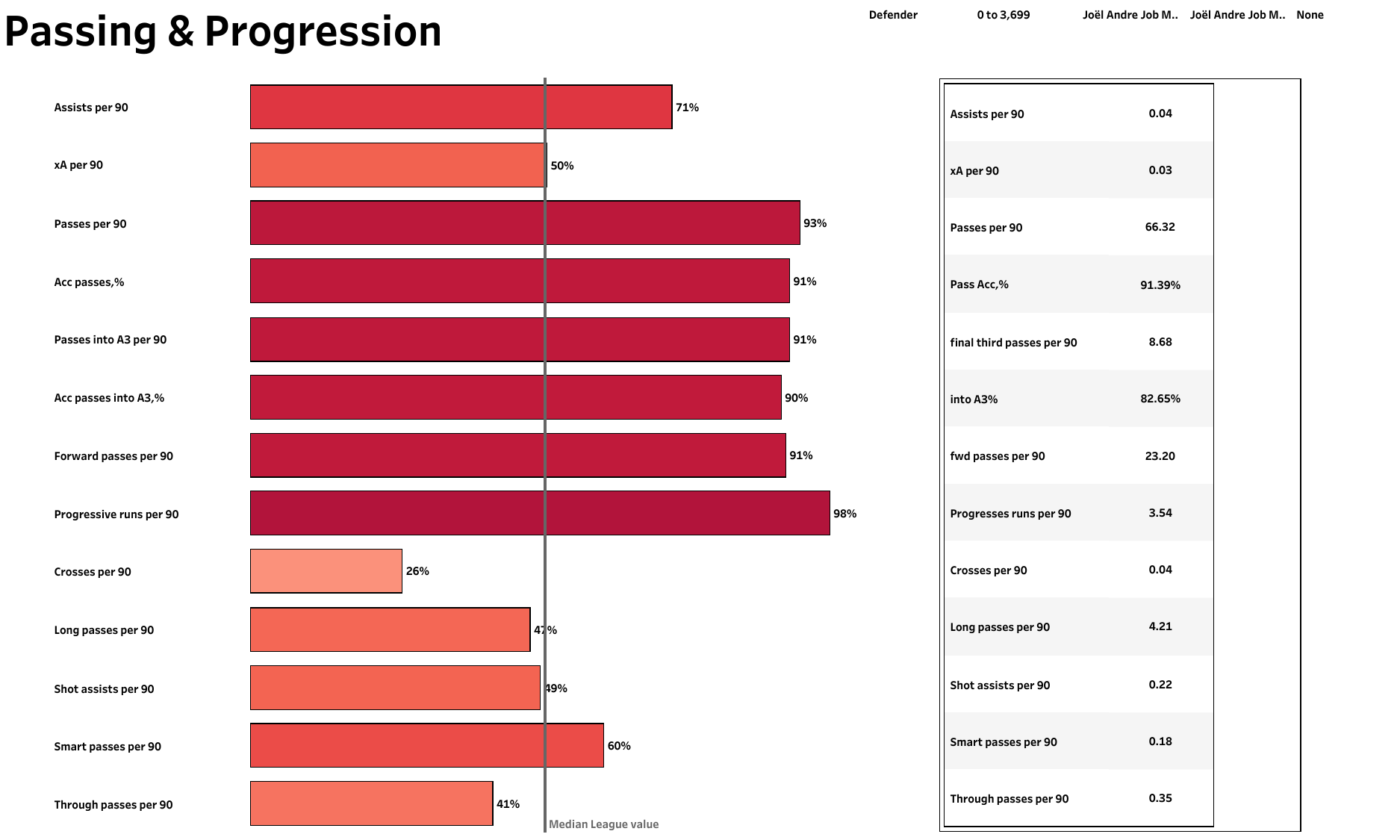 Matip has been a better ball-playing centre-back and is very calm on the ball when he receives it. He lies in the 90th percentile for pass accuracy, number of passes into final third, as well as forward passes and progressive runs per 90. Matip can carry the ball well and is a more progressive defender than Konate.

However, Matip has been very injury prone and has picked up at least one injury every season since his arrival.  In recent seasons, the pair have shown great chemistry and balance in terms of playing style, so being the safe option for Klopp will favor Matip.

Ibrahima Konate was bought by Liverpool for £36million from RB Leipzig. The 22-year-old Frenchman is an extremely promising asset to Jurgen Klopp, but what sets him apart from the other two defenders is the potential for him to become the next Virgil Van Dijk.

With a similar build and playing style to the Dutchman, in the next five years, we could see him take on a leadership role to rebuild a rather aging squad. Konate is a right-footed centre-back and has started as the RCB for Liverpool alongside Van Dijk. Konate fits right into the Liverpool squad as a ball-playing centre-back, with a strong and hefty physique that is fit for any defender playing in the Premier League. 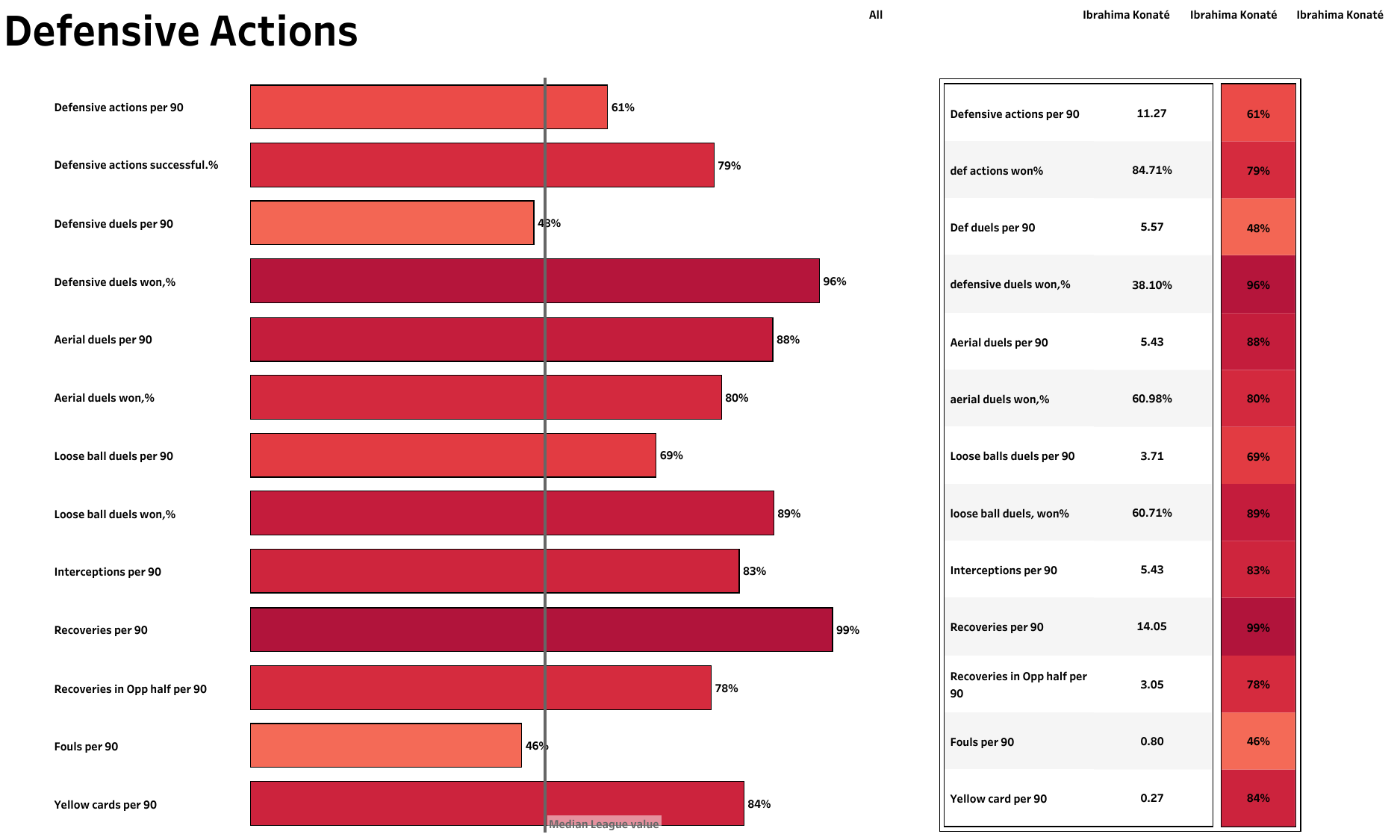 The above visual shows us the defensive metrics for Konate so far in the seven games that he has played for the Reds in the Premier League. Konate ranks very high in the league for the defensive duels he has won per 90 minutes. He has won 38% of the defensive duels he has attempted. He has also attempted 5.43 aerial duels per game and has won 60% of these aerial duels. He is very strong in the air and can deal with most of the aerial balls played by the opposition. The defender has also attempted 14.05 recoveries per 90 minutes. 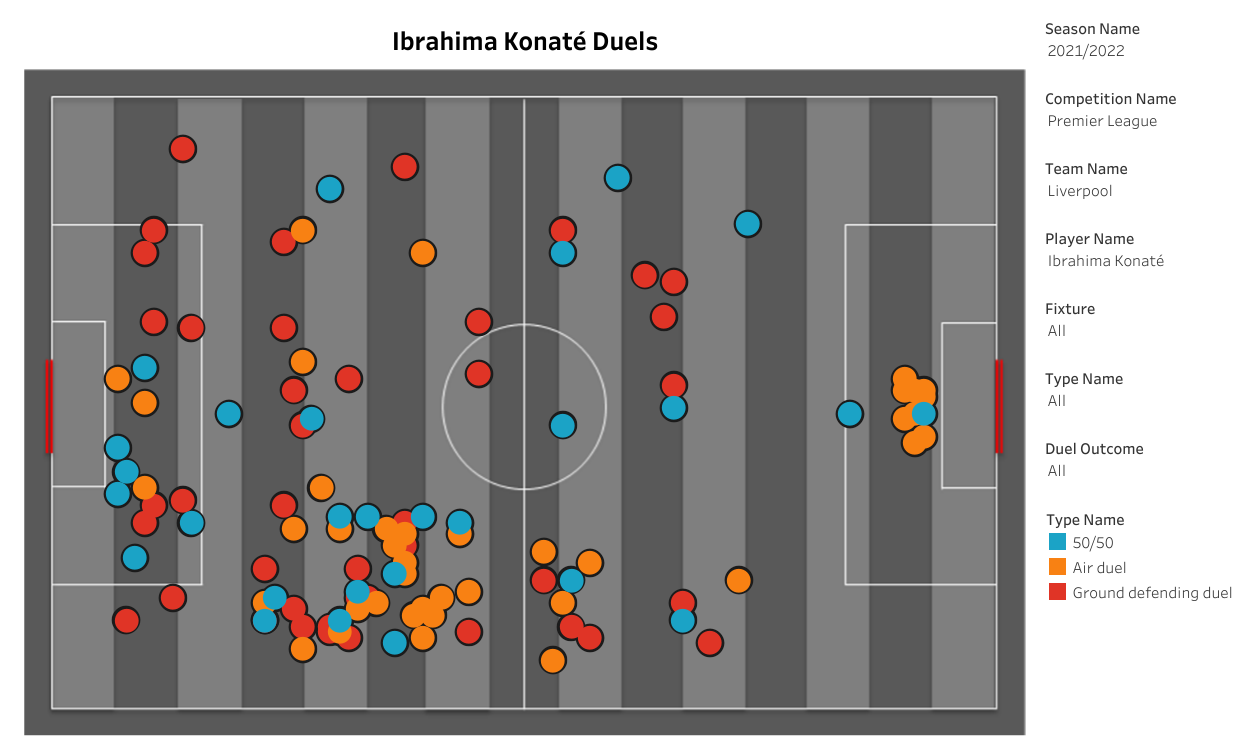 Konate has won several duels in his half, and these duels have been a mixture of ground duels, aerial duels, as well as 50-50 duels. Even though he has a hefty build, Konate is very fast and can beat opposition players with his pace. He is the perfect combination of strength and pace, which helps him to defend against both types of attackers. He is also a huge threat in the opposition’s penalty area from set-pieces as he has won several aerial balls in the box.

With two world-class centre-backs at his disposal, it is a tough job for Klopp to select one defender who will be pairing up with Van Dijk for the rest of the season. The German has been rotating his squad and using the depth so that all his players get the rest they need. Konate is a young and promising centre-back who has shown only positive performances so far, while Matip is a very experienced centre-back who provides the calmness required at the back when Liverpool are under pressure. Liverpool have been in great form and are chasing Manchester City for the top spot in the Premier League table, and the next few weeks will be very crucial for the Reds to determine whether they are still title contenders for this season.