Kostas Tsimikas produced a superb performance against Norwich City, showing once more that Liverpool now has three match-winning full-backs in the squad. It was understandable that Liverpool took a while to break the deadlock against Norwich City without Andy Robertson or Trent Alexander-Arnold on the pitch. But, thankfully, another full-back on the field has developed a knack for providing assists. It was Kostas Tsimikas who set up Sadio Mane for Liverpool’s equalizer.

Kostas Tsimikas arrived at Liverpool in the summer of 2020 from Olympiacos last season but was unable to create an impact since his arrival. He has been much better this season and has settled into the Premier League. His second season with the Reds, though, has seen him continue the fight to prove himself.

Tsimikas is enjoying the challenge of pushing one of the world’s best left-backs for game-time. Kostas Tsimikas is neither as direct nor as effective in his crossing as Robertson, but he has proven himself to be an excellent deputy in his absence. 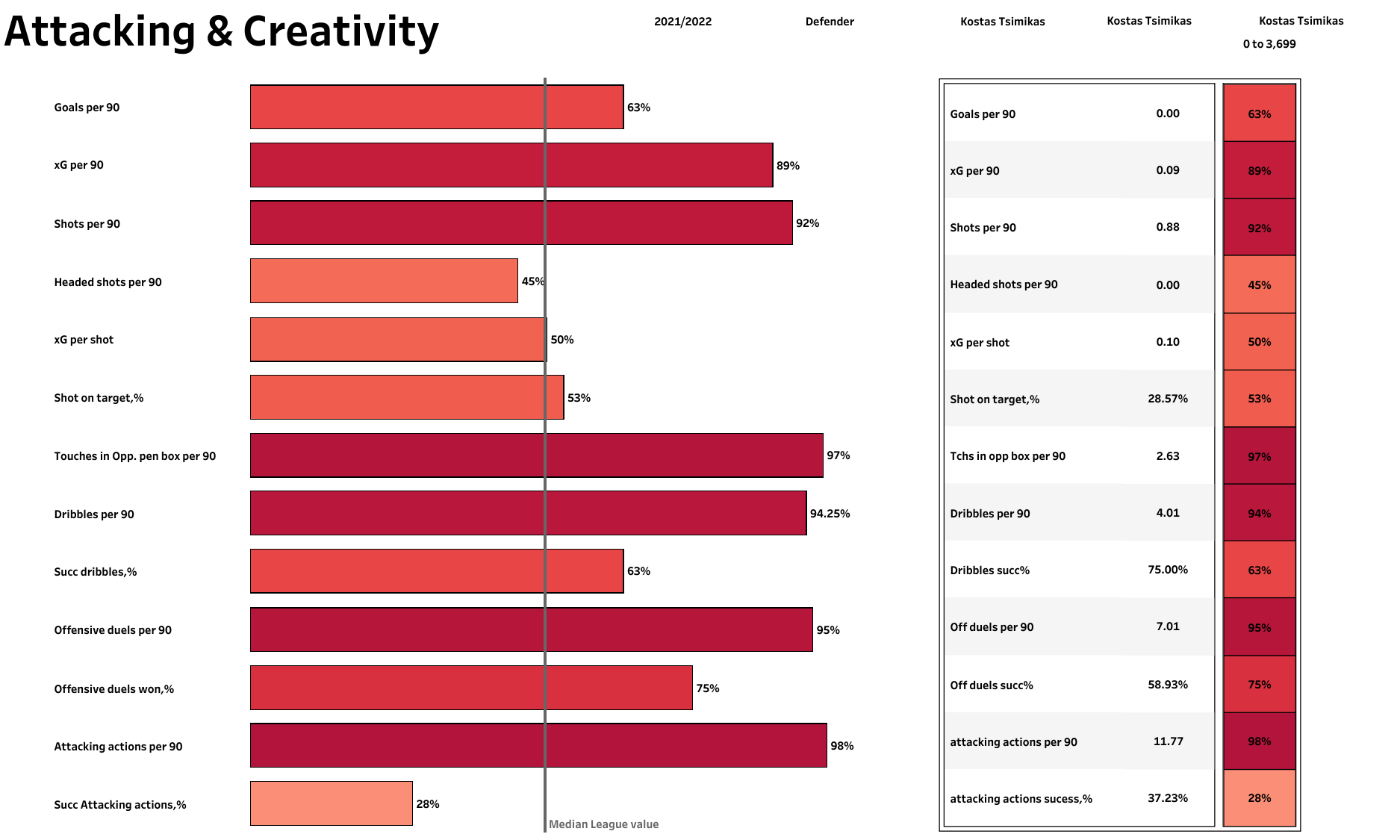 Tsimikas did provide an assist for their first goal against Norwich, but apart from the assist, the performance gave more proof that Tsimikas is more than capable of playing the crucial full-back role, which Liverpool’s system has become so reliant on. Both in attack as well as defensively, Tsimikas delivered an impressive display. He put in a total of seven crosses into the box, made seven recoveries, and won four ground duels. His attacking stats indicate that he has attempted 11.77 attacking actions per 90 minutes and has been able to complete 37% of these actions. He has completed 75% of the dribbles he has attempted and can progress into the opposition’s half with the ball at his feet. 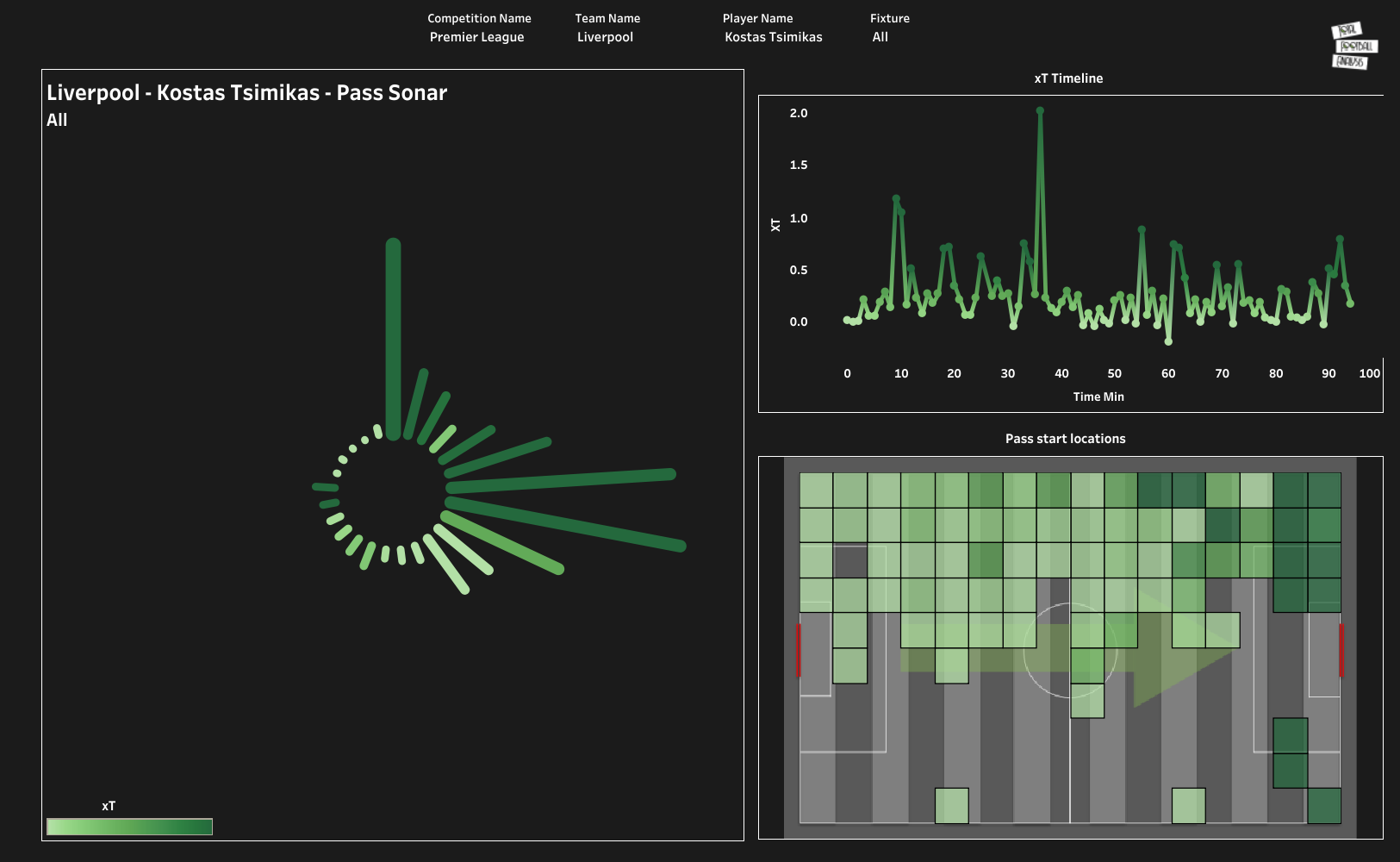 Tsimikas has played the majority of his passes from the left of the flank, according to the pass start location visual. The visual also indicates that most of his passes are towards the right side as he plays on the left flank, but he also attempted a lot of forward passes as he tends to attack the opposition defenders. He has a high xT from his passes on both sides with his crosses, and he also takes corner kicks from the right. The xT timeline indicates that Tsimikas is a huge threat throughout the game as he keeps making deep runs on the left flank and gets behind the opposition defense. 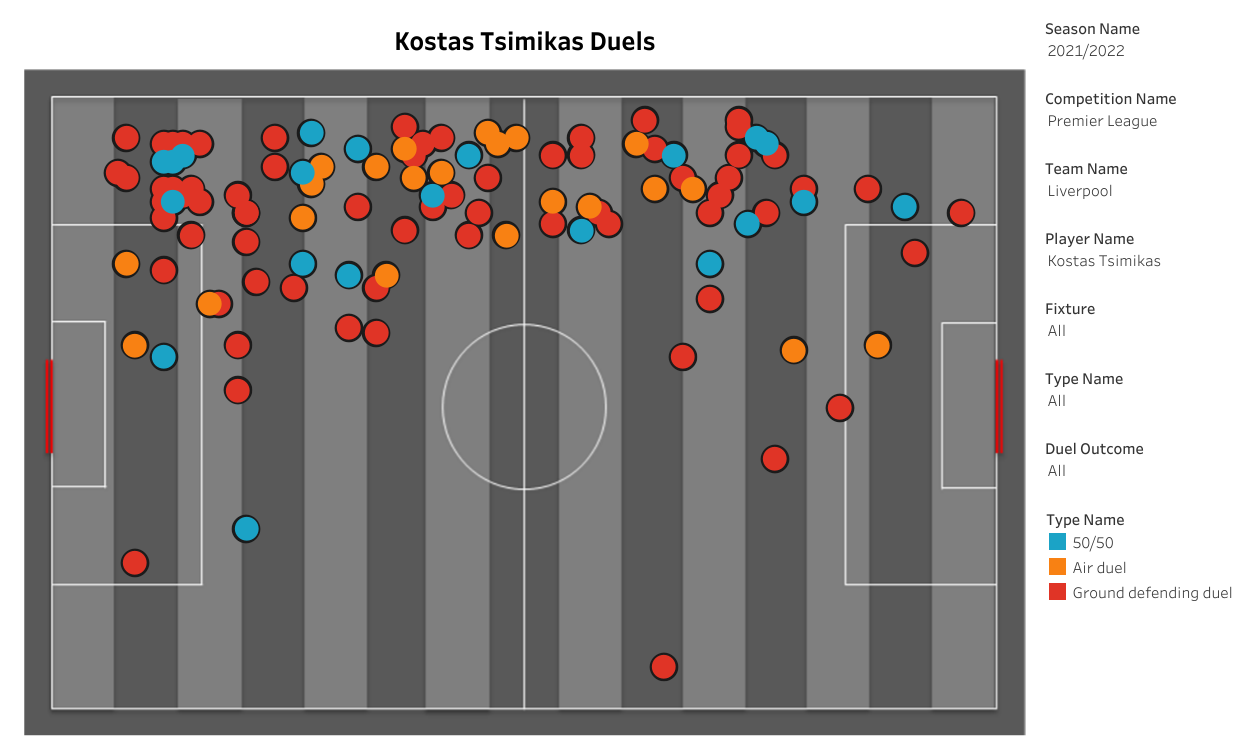 Tsimikas is a great defender and has won most of his defensive actions. Tsimikas has attempted 13.14 defensive actions per 90 minutes and has been able to win 66.67% of his actions. The above visual indicates that Tsimikas has attempted a wide range of duels on the left flank and has attempted more loose ball duels in the final third as Liverpool press their opponents higher up the pitch. Tsimikas is not the tallest of players but has still managed to win 45% of his aerial duels.

Squad rotation seems to be important at the moment for Klopp as he is using the players available to him in an attempt to manage workload and prevent the type of injury crisis that occurred last season. With the Champions League knockout stages underway and the League Cup final this weekend, it is expected that there will be more fixtures to be played every week. Klopp has managed to rotate his pack of players well so far. Tsimikas might not be on the same level as Robertson, but he has fitted in comfortably into the squad and played his parts to perfection whenever given a chance.