Liverpool will visit the Amex Stadium for their next Premier League game of the season against Brighton & Hove Albion. The Seagulls went down 2-1 to Newcastle United last time out, while Jurgen Klopp’s side sealed their spot in the quarter-finals of the Champions League in midweek.

Brighton & Hove Albion are coming off a 2-1 loss in the English Premier League to Eddie Howe’s Newcastle United. Newcastle United won thanks to goals in the first half from Scottish winger Ryan Fraser and Swiss centre-back Fabian Schar. Brighton & Hove Albion’s second-half goal from centre-back Lewis Dunk proved only a consolation. Brighton were very impressive in the first half of the season, but a recent dip in form has left the Seagulls in 13th position on the table with 33 points from 27 games. They have lost four consecutive games in the league and will be looking to break this run of losses. 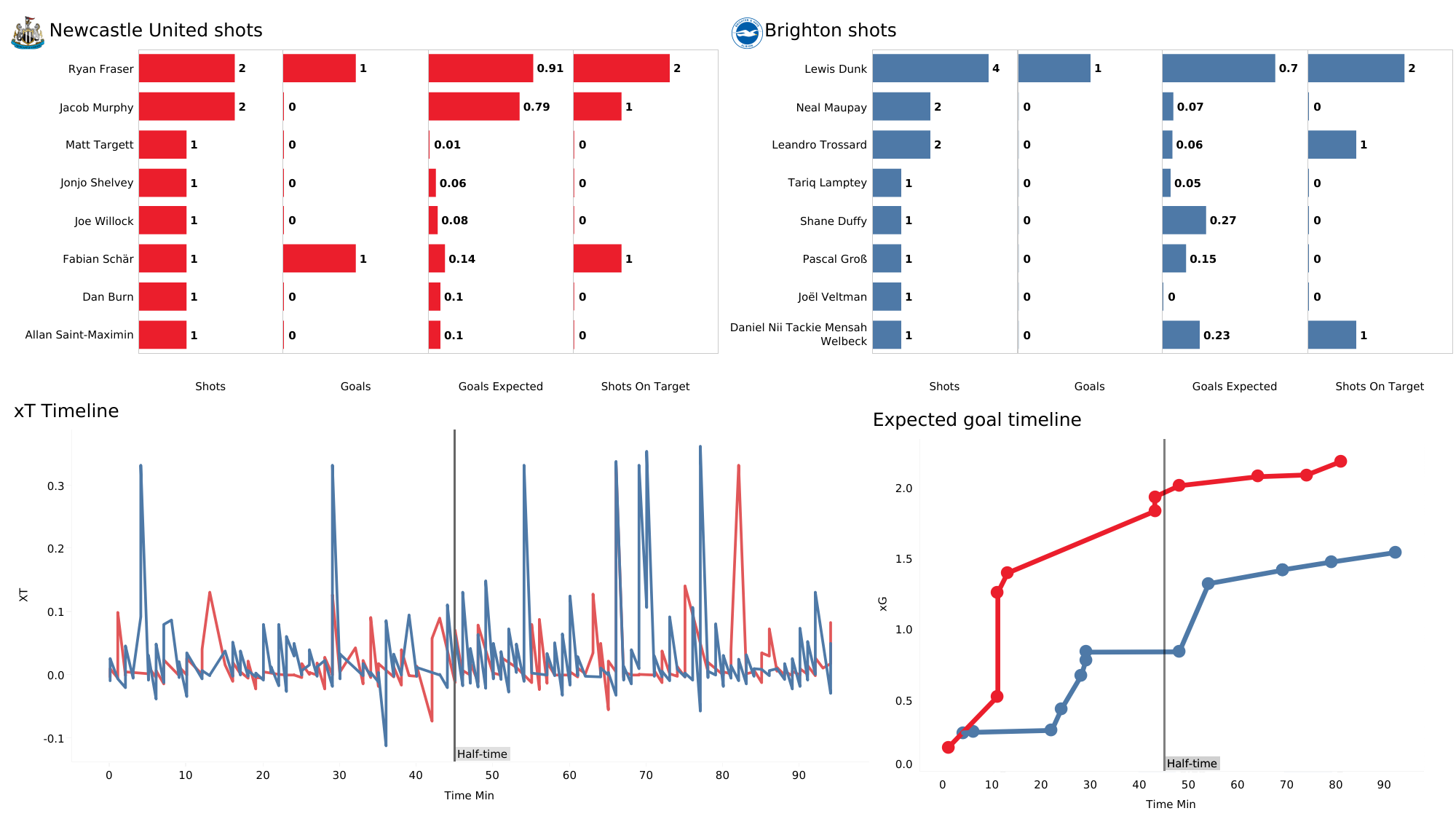 The xT timeline from their previous game against Newcastle indicates that Brighton created a higher threat on the Newcastle defense and were able to create great goalscoring chances. However, the xG timeline shows us that Brighton had a lower xG as they were not clinical enough in front of the goal with the chances they created. Their centre-back, Lewis Dunk, had most efforts on goal and also got their only goal of the game. 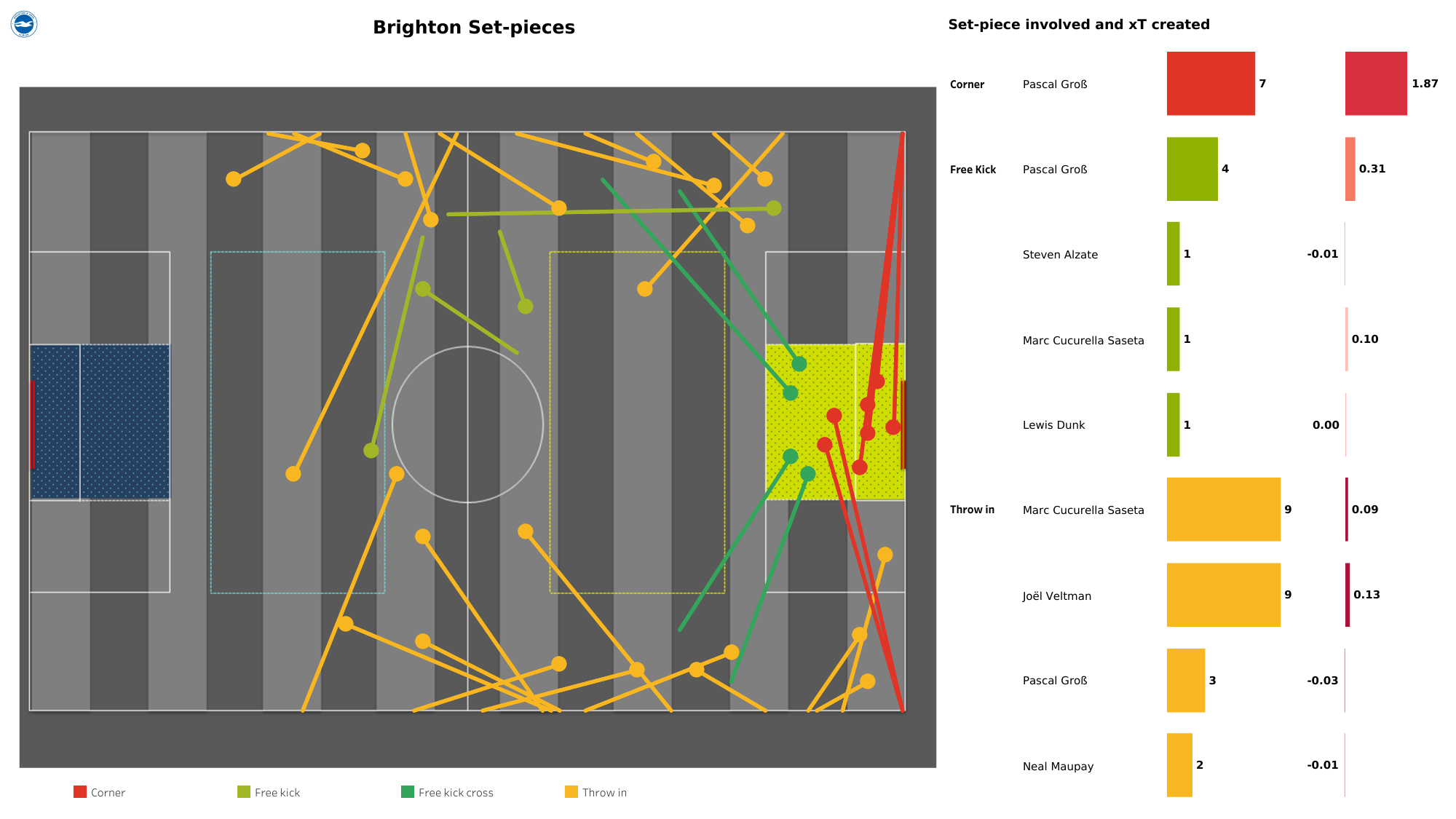 Brighton were very threatening from corners against Newcastle and can do the same against Liverpool. Pascal Gross attempted seven corners for the Seagulls and was able to generate an xT of 1.87 from these situations. The above visual indicates that all his corners were played into great positions in the penalty area.

Liverpool, on the other hand, were defeated 0-1 by ten-man Inter Milan in the second leg of the UEFA Champions League Round-of-16 tie. Inter Milan won thanks to a second-half goal from Argentine striker Lautaro Martinez. Despite the loss, Liverpool advanced into the next round of the Champions League as they already had a two-goal lead from the first half. Liverpool are competing for multiple trophies and still have a chance to win most of these trophies. They are six points behind league leaders Manchester City, who have played a game more. 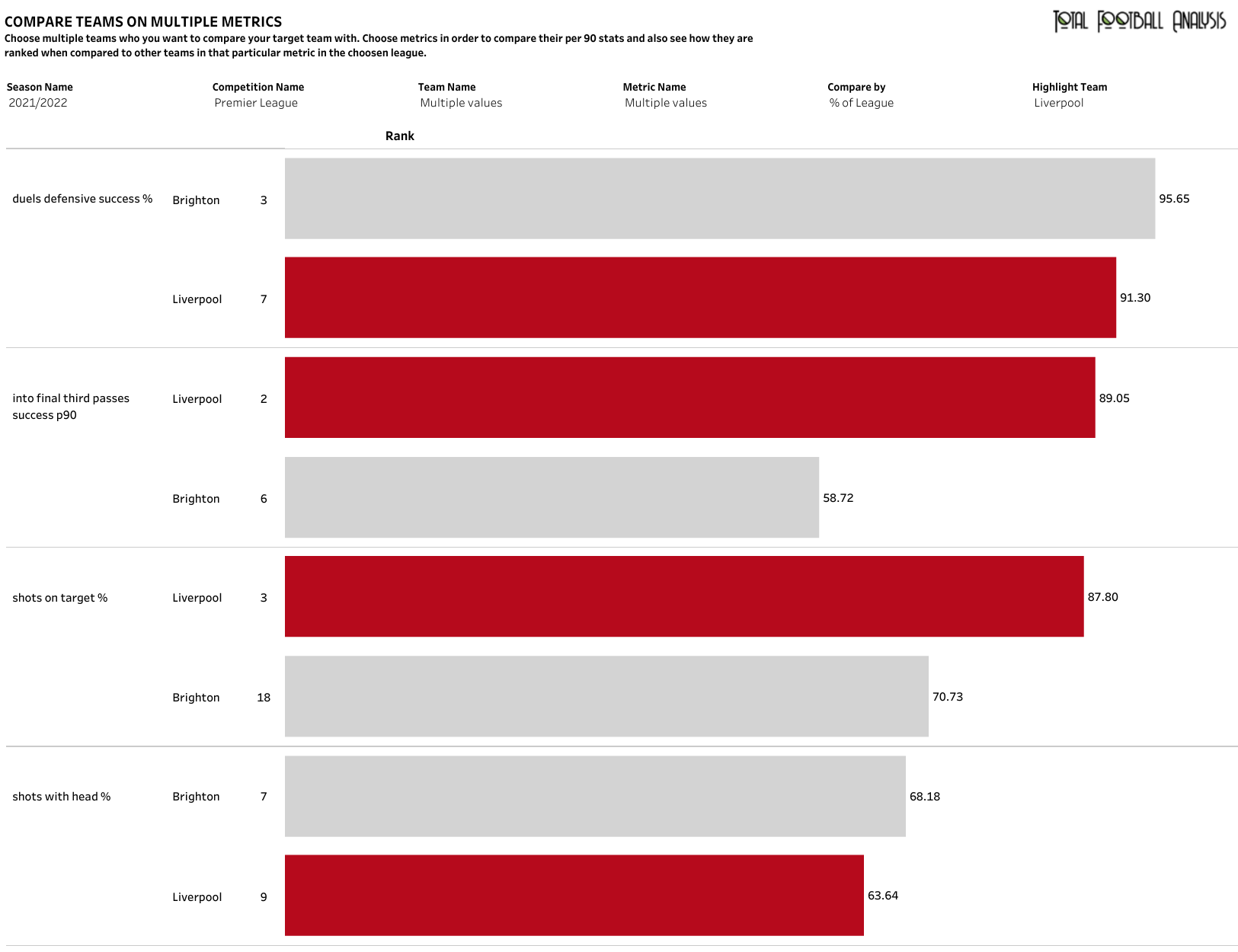 The above visual shows us the comparison between both clubs for some of the stats like defensive duels success, shots on target, and passes into the final third. Brighton have a better success rate in winning defensive duels and also have more shots on goal with headers. Brighton are very threatening from set-pieces, as discussed above. Liverpool have a higher shot on target percentage and have also played more passes into the final third.

Liverpool’s loss against Inter did end their 12-game winning run in all competitions, however, the Reds still boast a strong record in the Premier League, and they are expected to secure all three points against the Seagulls on Saturday.