Liverpool completed the signing of the Colombian winger, Luis Diaz, from FC Porto for a £37m fee in January, and many questions were asked about the price tag for the winger. Diaz has been an instant hit since moving to the Premier League, serving up exciting performances and firing two goals in his first five Premier League appearances. Diaz has come into the Liverpool squad and has become a regular starter because of the impact he has had on the team since his arrival. Diaz’s adaptation into the Premier League has been exceptionally impressive, particularly as he is yet to ascertain a firm grasp of English football. He has already contributed two Premier League goals in his first five domestic matches for the Reds, despite only arriving at the end of January. 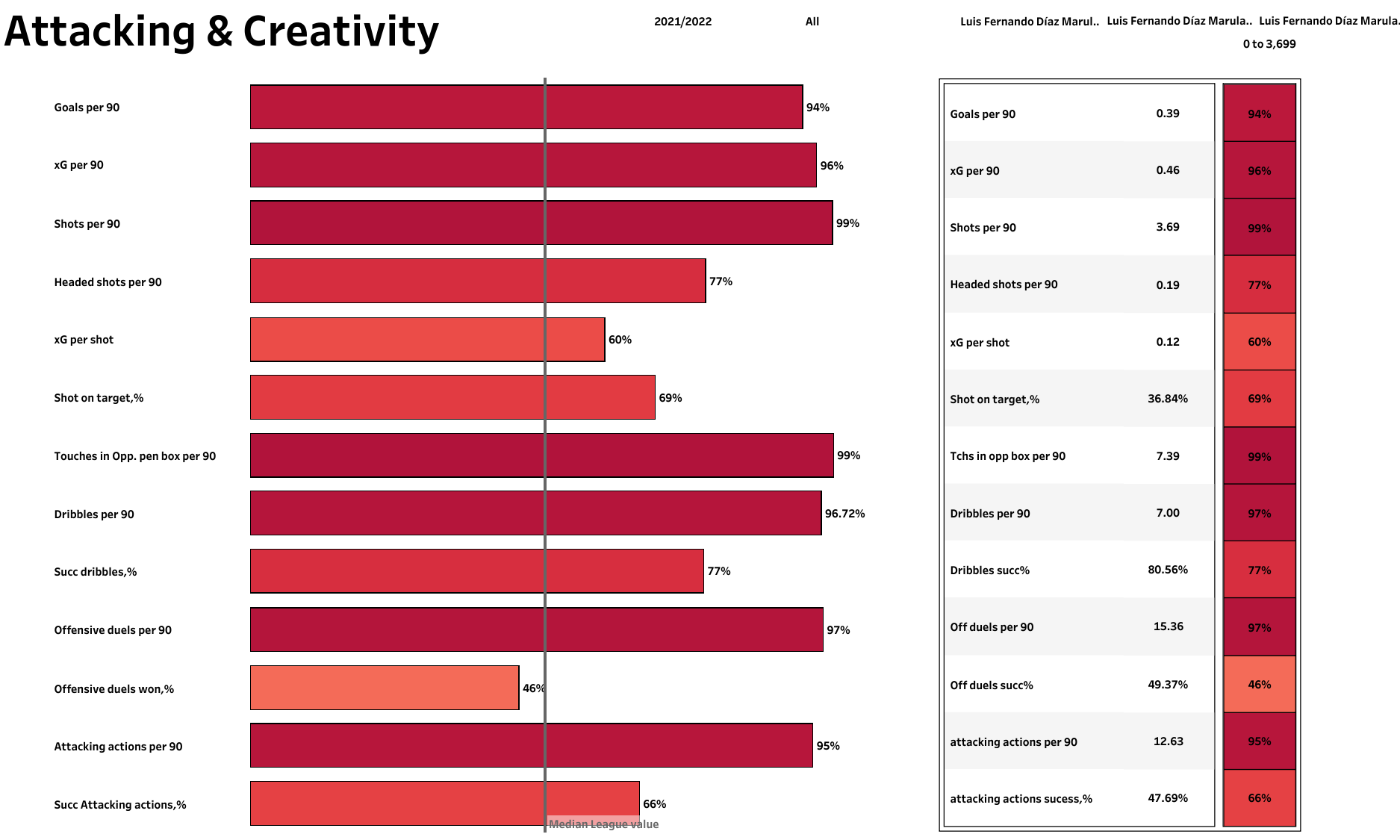 The above visual shows us the attacking and creativity stats for Diaz from his Premier League season so far with Liverpool. The metrics indicate that most of his stats are significantly higher than the league median value. Diaz has 7.39 touches in the opposition’s penalty area as he gets into threatening positions to receive the ball. He has attempted 15.36 offensive duels per 90 minutes and has been able to win 49.37% of these duels. The Colombian has also completed 17.61 attacking actions per 90 minutes and has completed almost 50% of these actions. 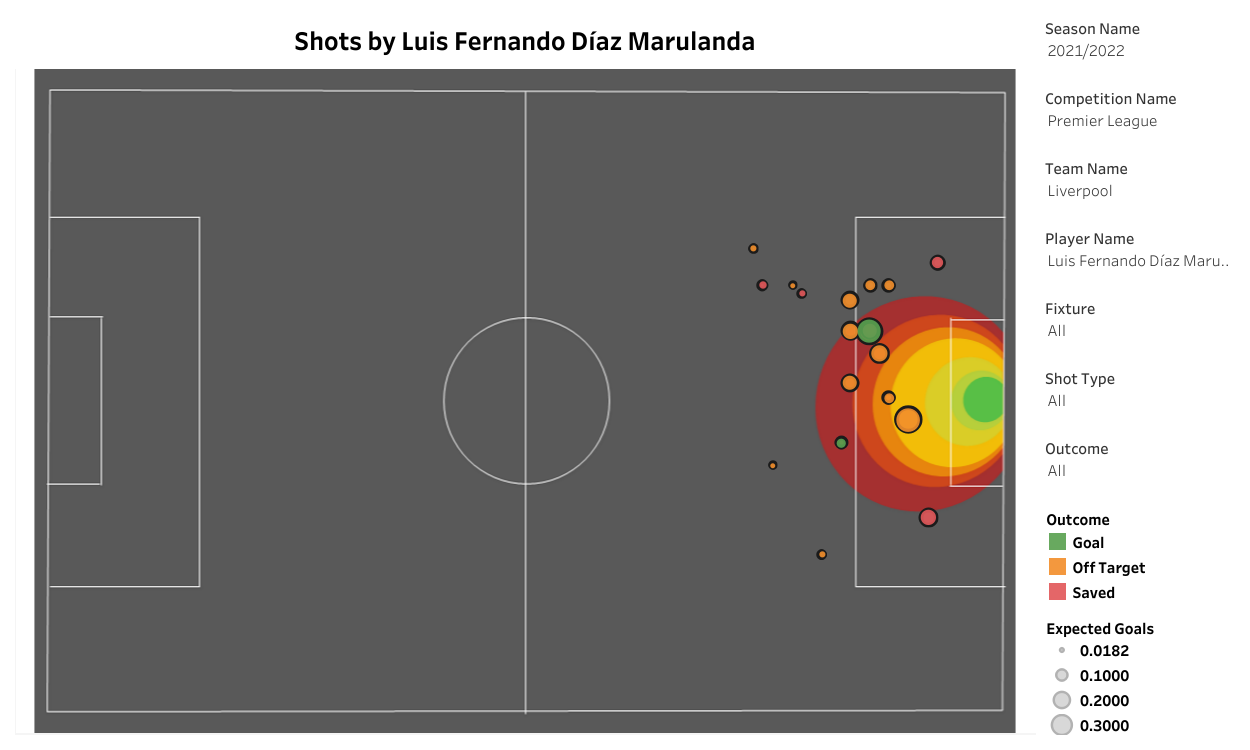 The above visual shows the shots attempted by Diaz in the Premier League. Diaz has attempted 18 shots on goal and has had 36.34% of them on target. Diaz generated an xG of 0.25 in the game against Brighton and also scored the opener in that game. Out of the 18 shots he attempted on goal, 12 have been from inside the penalty area as he can get into great positions in the box. This indicates that Diaz is highly clinical when he gets into threatening positions in and around the penalty box. 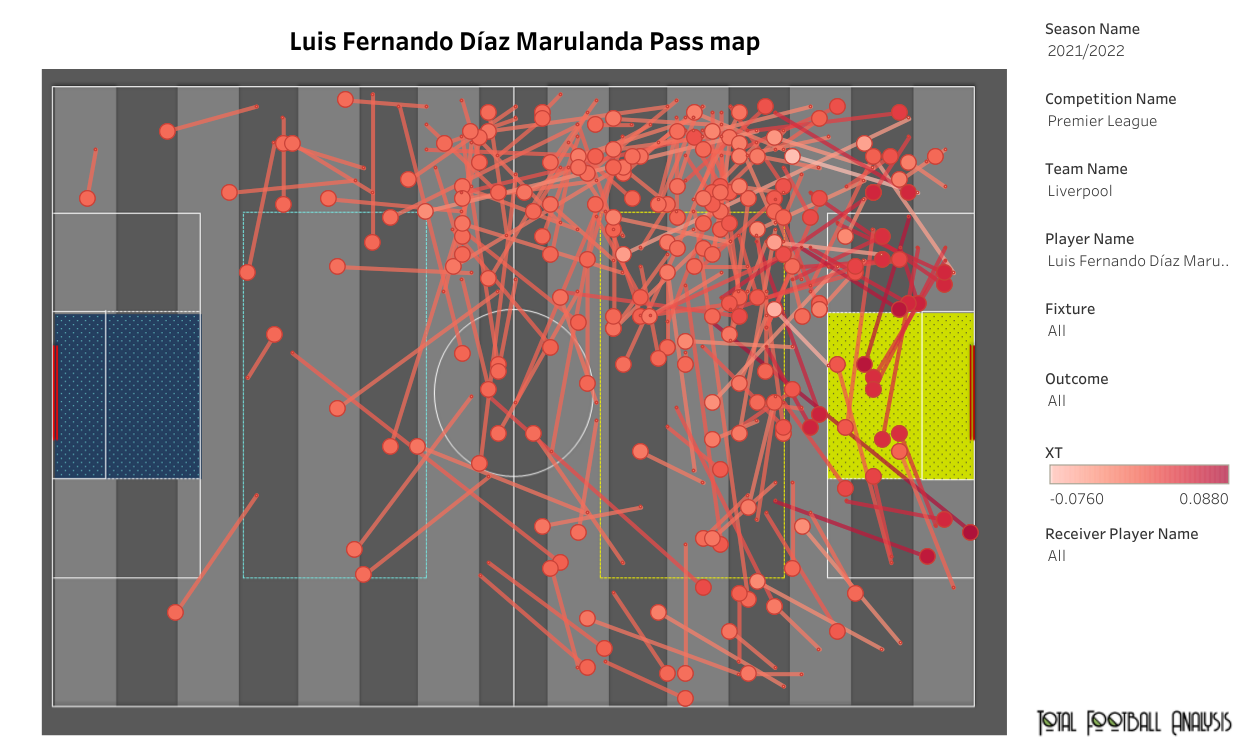 From the visual, we can see that as Diaz plays on the left flank, most of his passes are towards his right, and these passes have generated a high xT. Diaz has attempted 41.99 passes per 90 minutes with a pass accuracy rate of 88.43%. The passes indicate that he loves playing in wider areas and can put great crosses into the penalty area. Diaz has excellent dribbling abilities, has great control of the ball, and can take it away from defenders in an instant to get into threatening positions to either cross the ball into the penalty area or take a goal attempt.

Diaz brings a lot of creativity in the Liverpool attack with his blistering pace and quick dribbling. Liverpool now have even more depth in their attack and do not have to rely on a single player for goals. Liverpool’s victory against Arsenal on Wednesday night means they are now only one point away from table-toppers Manchester City. Liverpool have been brilliant in keeping the title race alive.