Liverpool have completed the signing of Colombian winger Luis Diaz from FC Porto for a fee of £37m, with the fee potentially rising to £49m. Diaz was linked to Liverpool for quite a long time and is said to be the perfect winger for Jurgen Klopp’s team. There have also been reports saying Diaz is the long-term replacement of Senegalese winger Sadio Mane. It’s the latest move from the Merseysiders to move on from their previous front three, having eased Diogo Jota into Roberto Firmino’s starting spot. The same will surely now happen to Mane, whose form has been dropping for the best part of two years. He’ll be 30 at the end of the season, with a year remaining on his current contract.

Diaz has established himself as one of the most highly sought-after attacking talents in Europe over the past 12 months. He moved to FC Porto back in 2019, joining the club for a low-money fee. Although the winger was involved in just 11 league goals in each of his first two seasons in Portugal, he put up impressive performances in Copa America, scoring four goals. Diaz’s contributions in the attack helped Colombia finish third, while the player himself ended as the tournament’s joint top-scorer. His performances in Copa America were the head-start Diaz was looking for heading into the new season. The attacker has scored 12 goals in 15 league appearances so far. He has made a solid impression in the UEFA Champions League as well, where he scored a goal each in the home and away games against AC Milan.

Let’s take a look at the stats for both players from the UEFA Champions League 21/22 group stages: 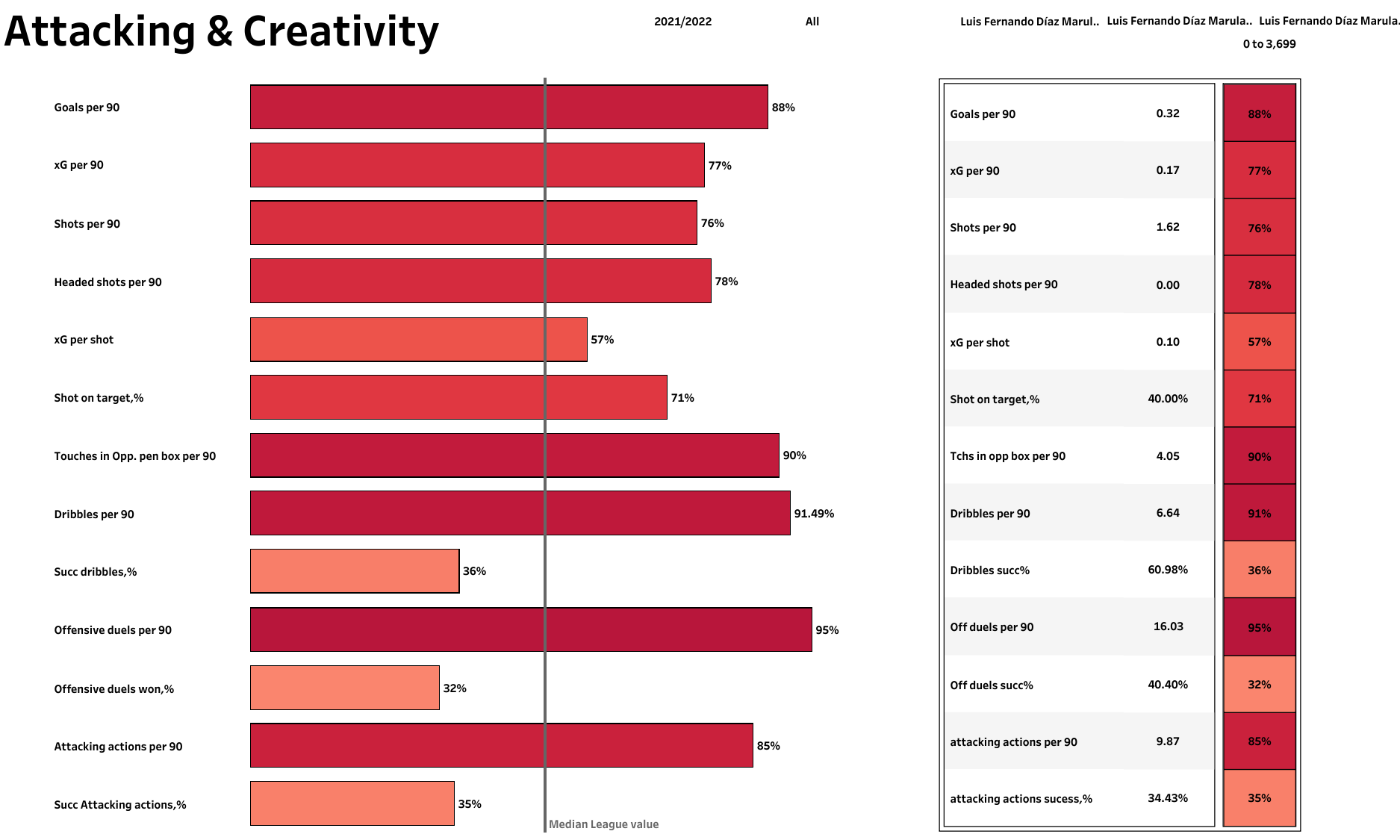 The above visual shows us the attacking and creativity stats for Diaz from his Champions League season so far with FC Porto. The metrics indicate that most of his stats are significantly higher than the median league value. Diaz has 4.05 touches in the opposition’s penalty area as he gets into threatening positions to receive the ball. He has attempted 16.03 offensive duels per 90 minutes and has been able to win 40.4% of these duels. Although, there is no guarantee that these numbers can be replicated in the Premier League, and it may take some time before the Colombian can find a slot in the attacking trio. 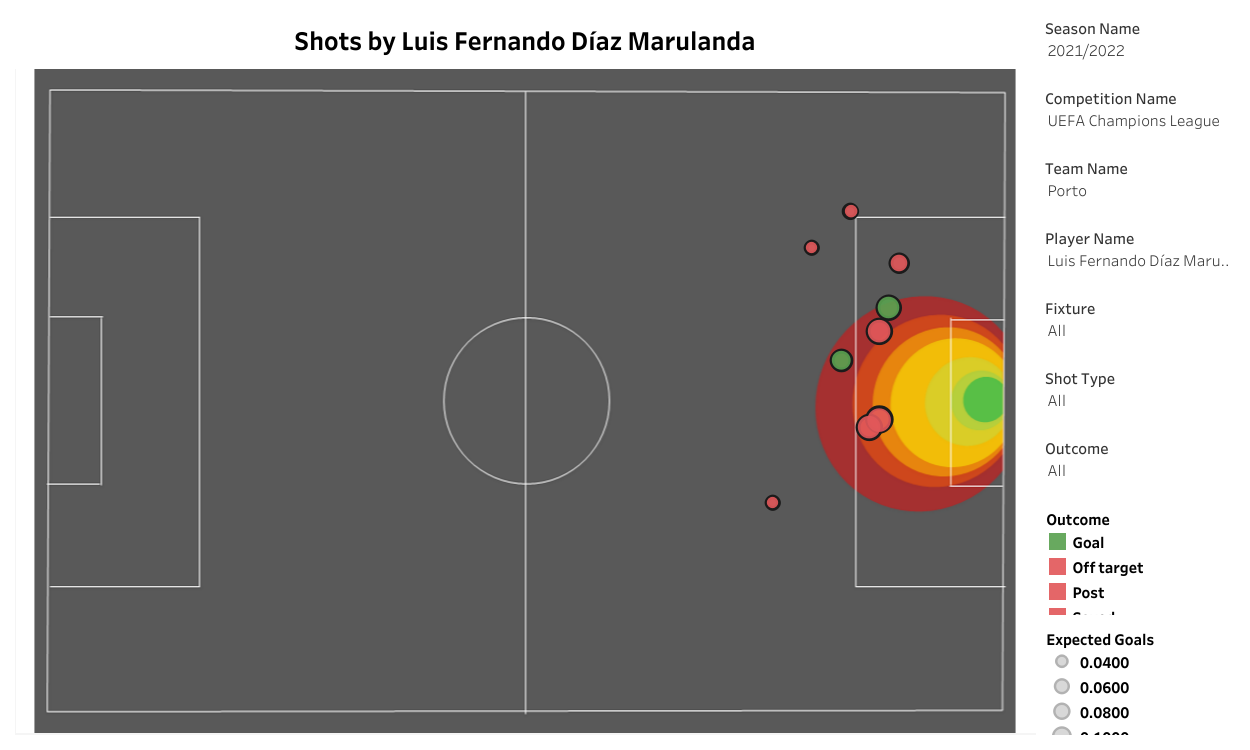 The above visual shows the shots attempted by Diaz in the Champions League. Diaz has attempted 10 shots on goal. He has generated an xG of 1.040 in six games and was their top scorer in the group stage with two goals. Out of the 10 shots he attempted on goal, five were on target, and he hit the post with one of his attempts. This indicates that Diaz is highly clinical when he gets into threatening positions in and around the penalty box. 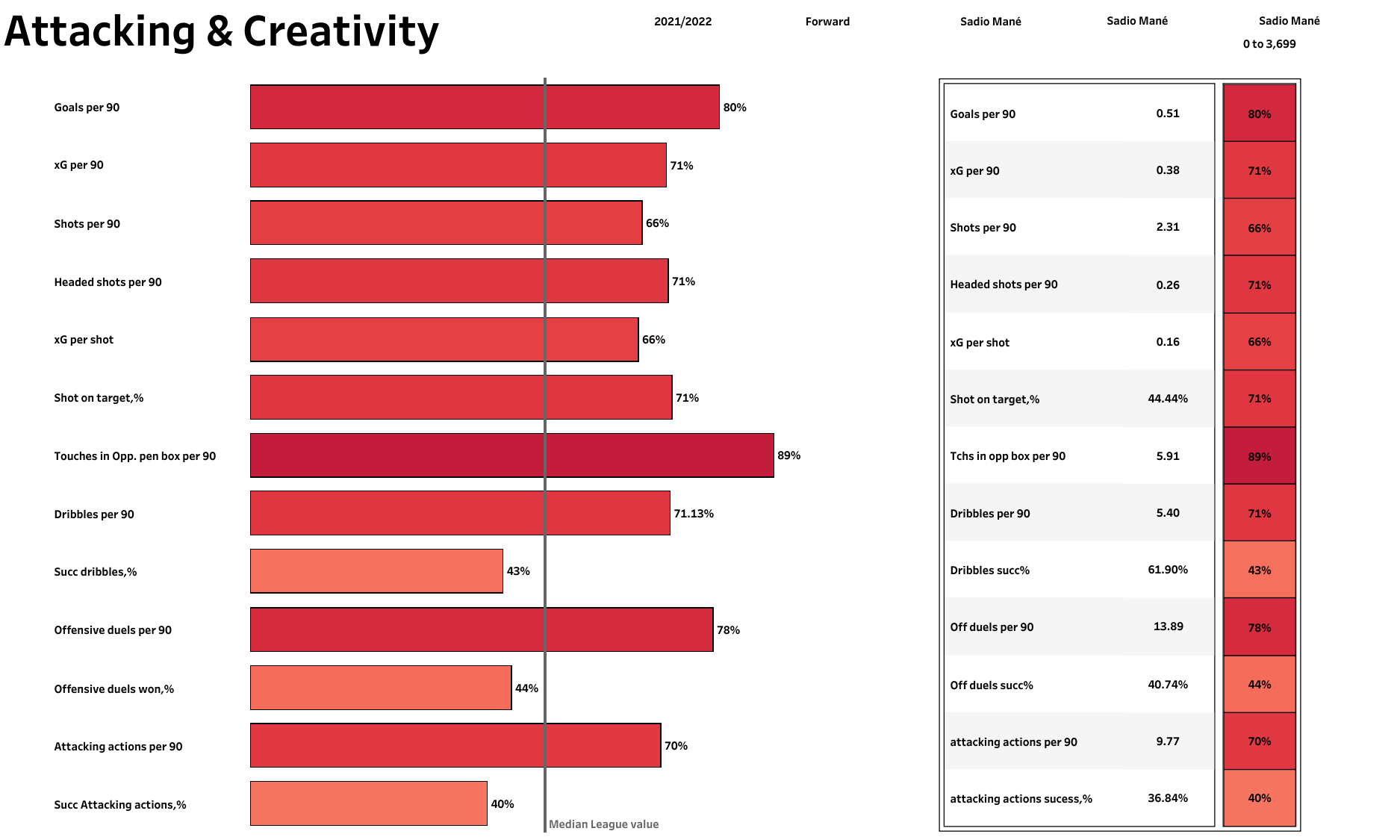 Sadio Mane has put up quite impressive numbers this season, in terms of attacking the opposition goal, but he has found it difficult to get on the scoresheet at times. He has scored eight goals so far, with only one assist in the Premier League, and has two goals in the Champions League. When comparing his stats to Diaz, the dashboard indicates that both players have put up similar numbers considering both play in a wider position on the left. Mane has had more touches in the penalty area, but Diaz has a better success rate with his attacking actions. One of the major concerns for Mane has also been the lack of match fitness in the recent seasons. 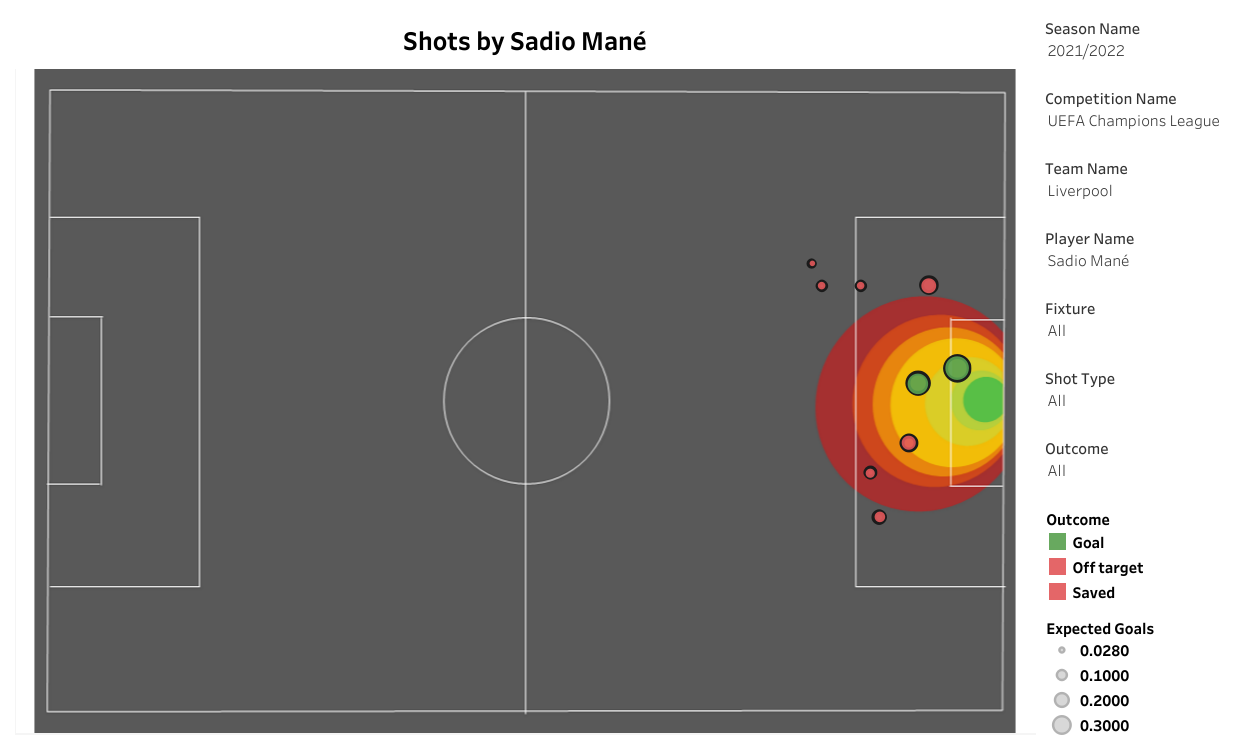 Mane has attempted nine shots in the Champions League and has converted two shots. He has had four shots on target and has most of his shots from inside the penalty area.

With Salah seemingly improving despite being nearly 30, Jurgen Klopp may have his sights set on a Diaz, Jota, Salah front three in the not-so-distant future. While Mane has kept a regular place across the frontline for the Reds, his best years seem to be behind him. The Senegalese winger’s Premier League goal tally has decreased for the last three consecutive seasons. Luis Diaz can be an interesting addition to the Liverpool front three as he has a lot to offer offensively and can help them catch up with Manchester City for the top spot in the Premier League.