Liverpool is linked with a move for Premier League team West Ham United’s winger. They look at him as a potential replacement for star winger Mohamed Salah. The player in question is none other than West Ham’s star Jarrod Bowen. The forward has been in brilliant form for David Moyes’ side this season, and it’s no surprise that Liverpool is interested in him. The 25-year-old has scored six goals and assisted a further seven in 23 games in the premier league this season.

The 25-year-old joined the Hammers from Hull City two years ago for an initial fee of £20million and has enjoyed a breakthrough over the past year. His form has seen him linked with Liverpool, who could be in the market for attacking reinforcements this summer – due in part to the contractual situation of Salah and Sadio Mane. The former Hull City midfielder is a player admired by manager Jurgen Klopp and is viewed by many supporters as a potential successor to one of the Reds’ front three. 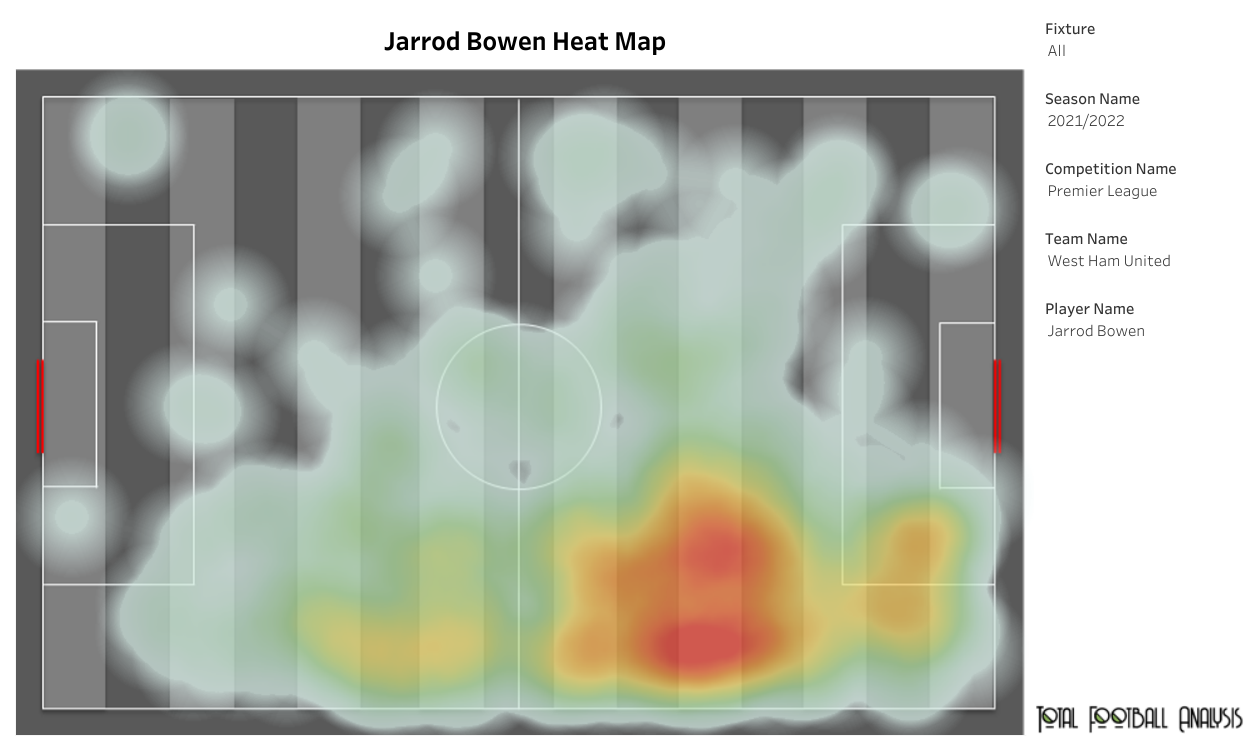 The forward player features from the right side and can deliver good set-pieces with his left foot. He plays as an inverted winger, which gives him the freedom to either cut in to take a shot or cross the ball into the penalty area. The visual indicates that Bowen puts in a lot of hard work on the pitch and is constantly hustling to get the ball. Bowen makes more sprints than any other player on the pitch and is constantly pressing the opposition defense. This is his third season in the Premier League, and he has shown some good form. The 25-year-old has featured in every league game for West Ham this season. 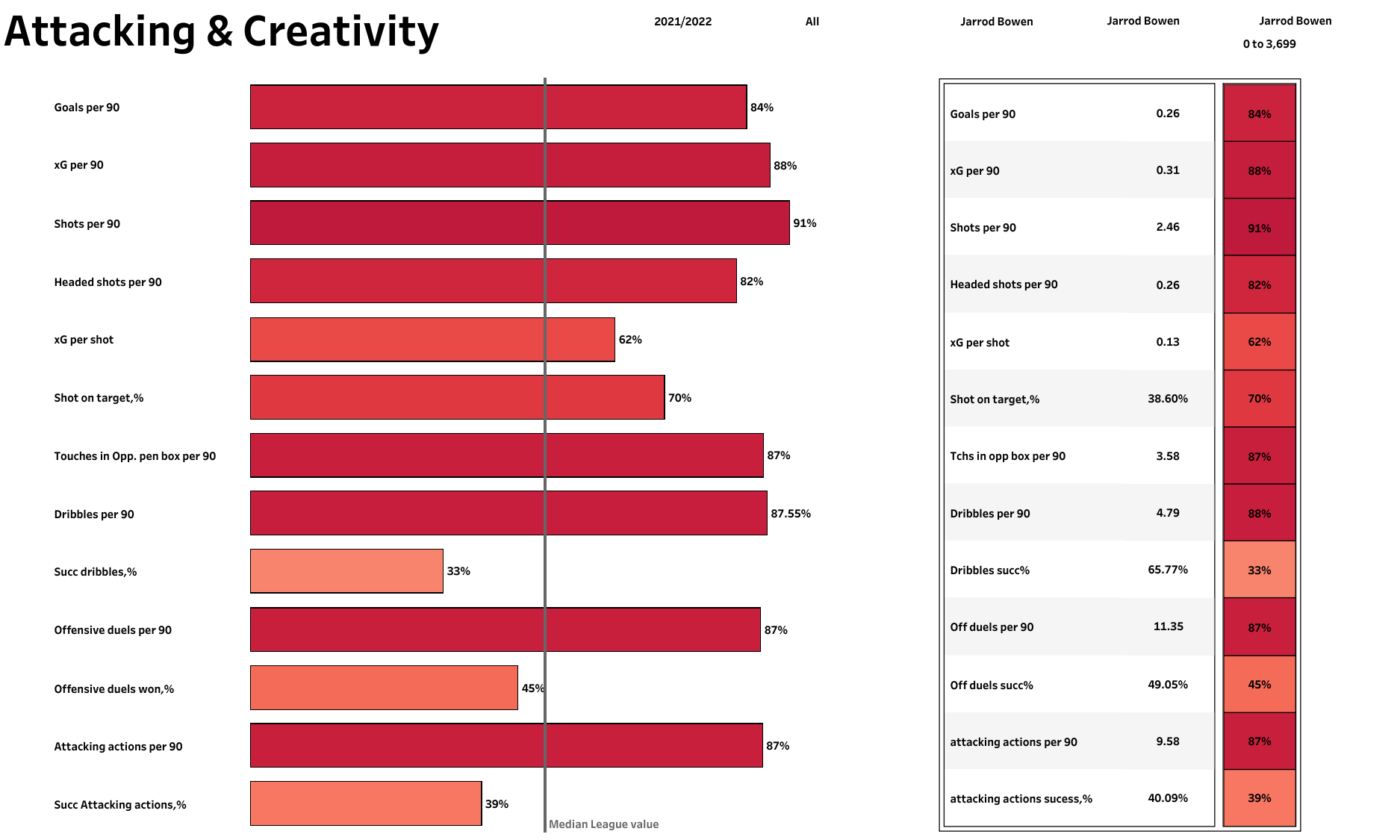 Bowen has been a regular starter for West Ham United this season. He has played in every match and has scored six goals along with seven assists for his side. The player carries an expected goal rate of 0.31 per 90 minutes and has attempted 2.46 shots on an average with a shot accuracy rate of 38.60%. Bowen has attempted 9.58 attacking actions per 90 minutes and has been able to complete 40% of these actions. He provided two assists against Liverpool when West Ham played against the Reds and has an overall expected assists rate of 4.94. Bowen has taken 3.66 touches inside the opposition’s box per 90 minutes. 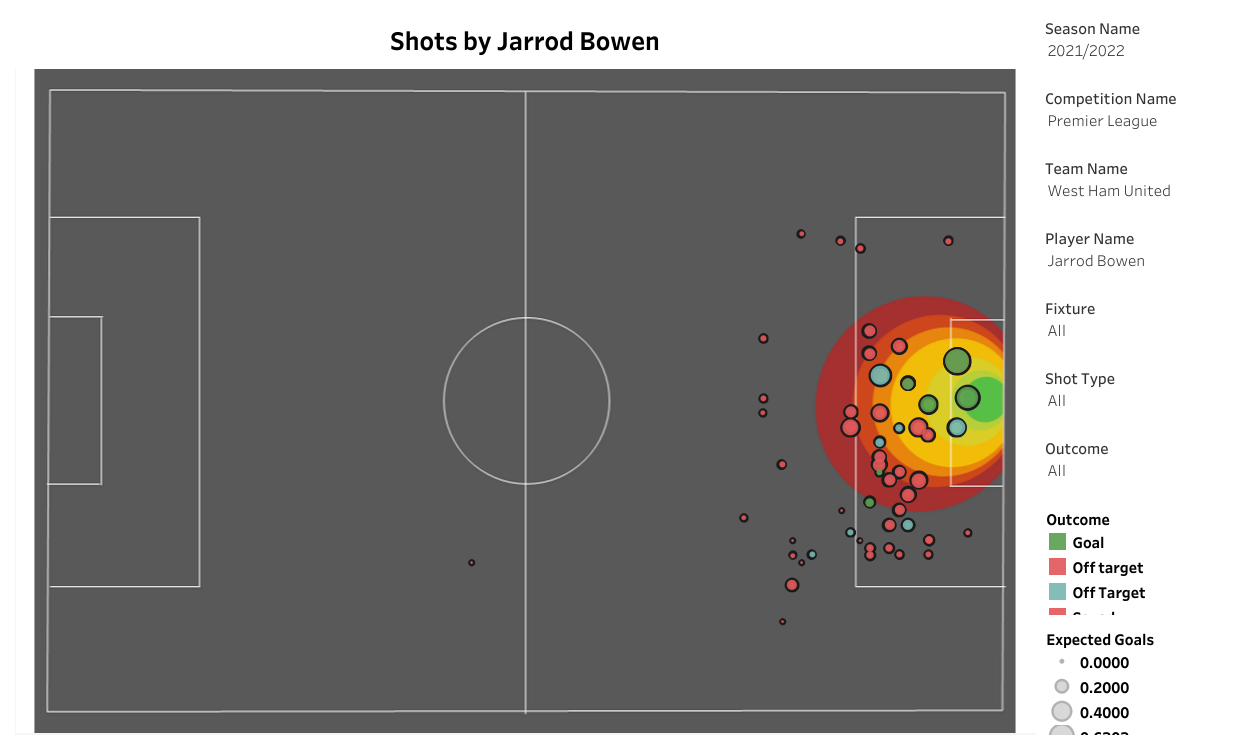 Bowen has attempted a total of 57 shots on goal so far, with 22 shots on target. The visual indicates that he has attempted shots on goal from various positions in the final third. The forward has a lethal left foot and can convert half chances into goalscoring chances. Most of his shots have been from inside the penalty area from the right side of the pitch, as he has been able to get into threatening positions. 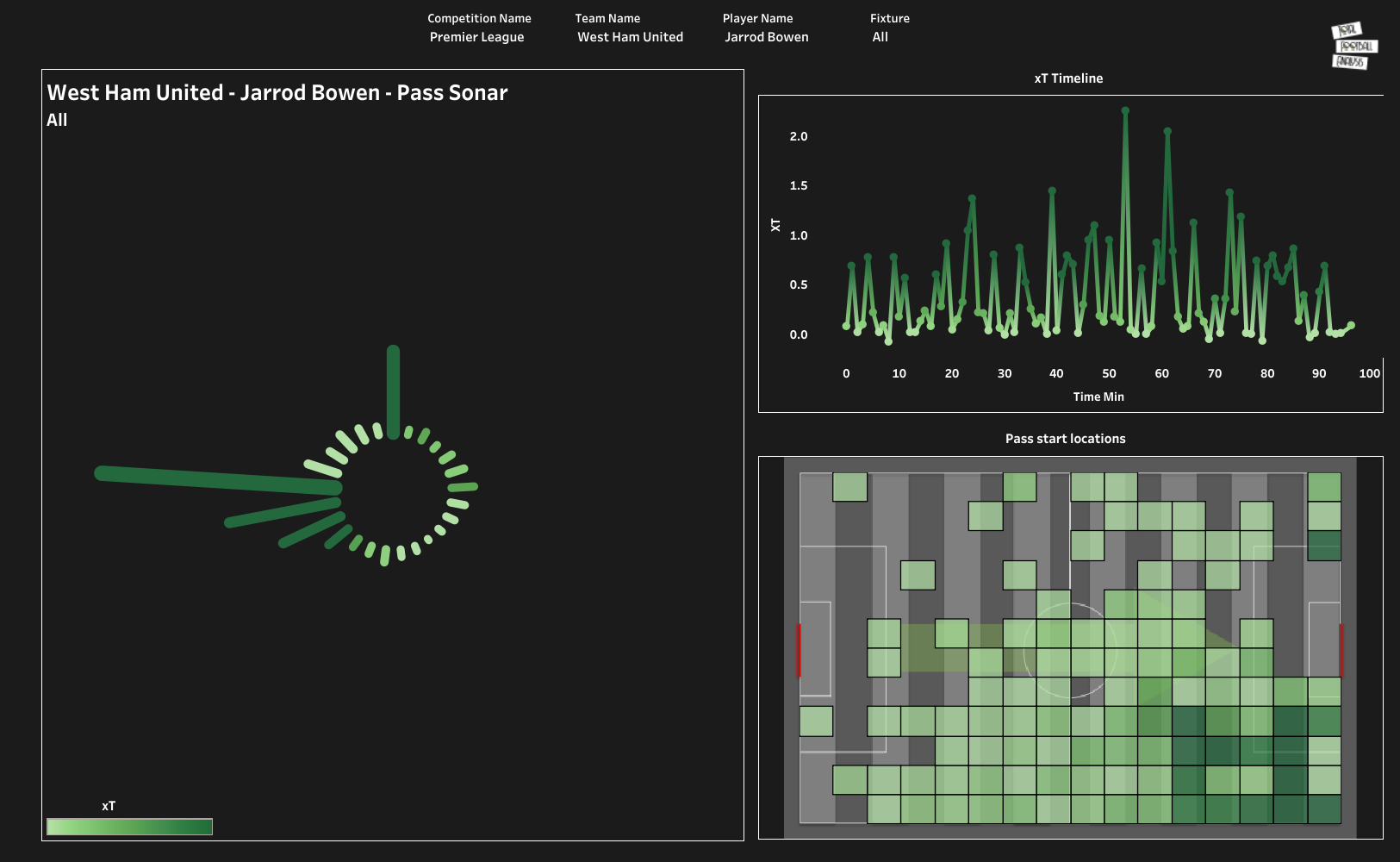 Bowen has largely been involved in West Ham’s build-up towards the goal as he has played a wide range of passes. His pass sonar indicates most of his passes have been from the right wing, and he has also put in several crosses into the penalty area. These crosses have generated a high xT. His pass start location indicates how much of a threat he is on the right flank with the number of xT creation zones he has on that side of the pitch. The xT timeline indicates that Bowen is a huge threat to the opposition defense throughout the game and can use his pace to counter the opposition every time he gets the ball.

A chance to play at the Champions League level and contest for the Premier League title with Liverpool would be tempting. Jurgen Klopp wants to increase his squad depth and is keen on Bowen due to his pace and hard work. His attributes would fit well with Liverpool’s style, and he would provide back-up for Mohamed Salah, Sadio Mane, and Diogo Jota.