There has been major speculation on whether Liverpool’s young midfielder, Curtis Jones, should stay at Anfield and fight for his place in the starting lineup or whether he should try and make a move away from Liverpool. The midfielder’s early-season momentum was stopped when he suffered an eye injury in November that kept him out for two months. Jones has since returned to action but has been slow to find the form he displayed in the opening stages of the campaign. The 20-year-old, who first broke into the first time two years ago, hasn’t truly moved to the next level yet. The homegrown midfielder has since firmly established himself in the first-team squad, joining Trent Alexander-Arnold as one of the leading breakthroughs from the Academy during the Klopp era.

Jones has benefitted from the long-term absences of Harvey Elliott, Naby Keita, and Thiago Alcantara, but soon all three will be returning to fitness and contend for a starting position in the midfield. Keita has returned from AFCON with Guinea, while Elliott and Thiago are on the way back from injury. With the midfield back to full strength, Jones’ position within the team is under pressure. His performances of late have not guaranteed a starting spot in the XI, and with the season heading into its last three months, he knows he needs to lift his game if he wants to convince his manager that he deserves to be one of the first names on the teamsheet. 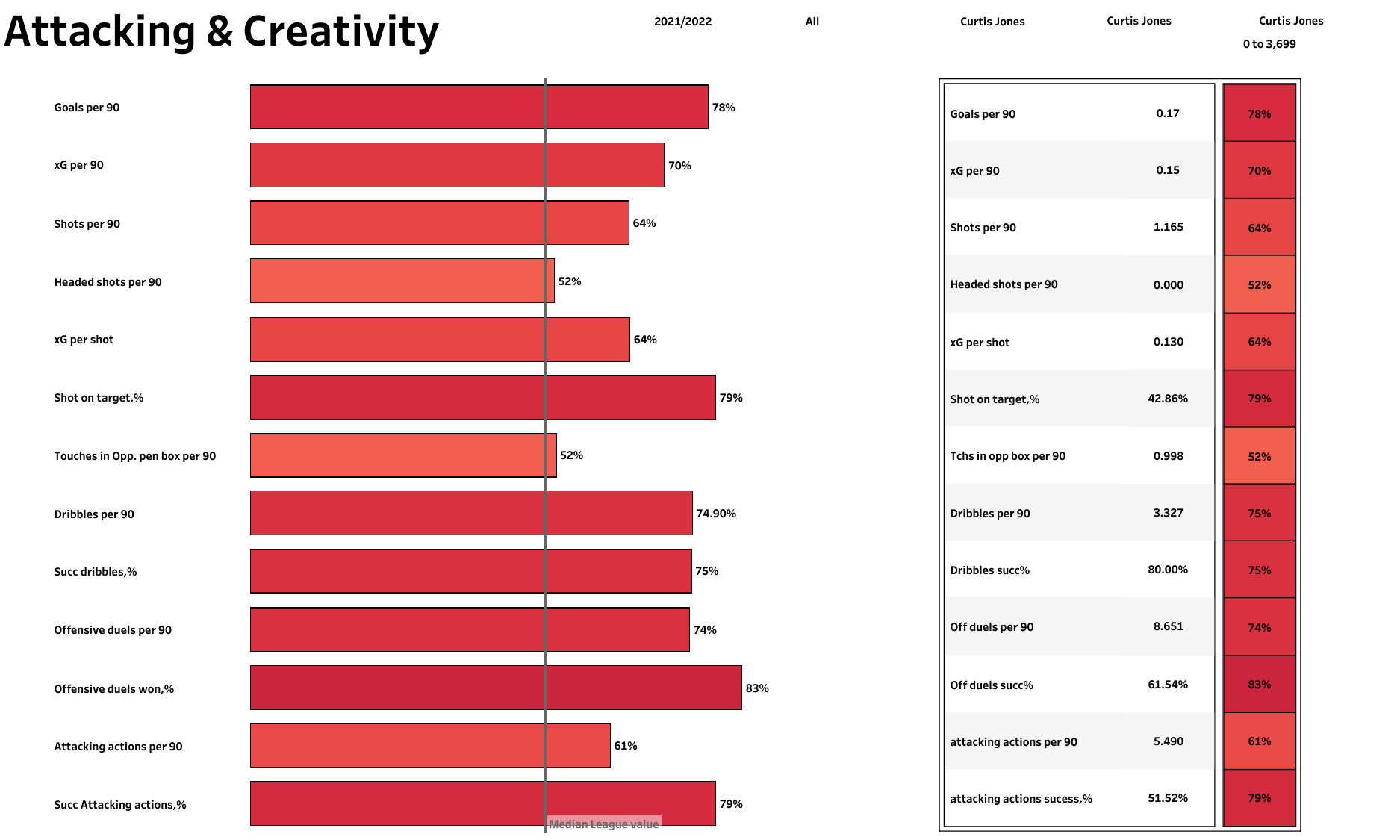 The above visual shows us the attacking and creativity stats for Jones from this season. He has made a total of eight appearances so far in the season and has bagged one goal. Earlier in his academy days, Jones was more of a wide forward on the left and preferred playing inside the final third. This isn’t a position that exists for him under Jürgen Klopp. Instead, he is much more of a traditional central midfielder in his positioning. While this may have been a role Jones is familiar with, it is one that came with much more defensive responsibility than before. A reason for this is the presence of Robertson and Alexander-Arnold, full-backs who push up and create a lot of chances from wide areas. This is mostly due to the role he has been given at Liverpool, which prioritizes ball distribution rather than chance creation, as seen also with other midfielders. Jones has had 42.86% of his total shots on target and has completed more than 50% of his attacking actions. 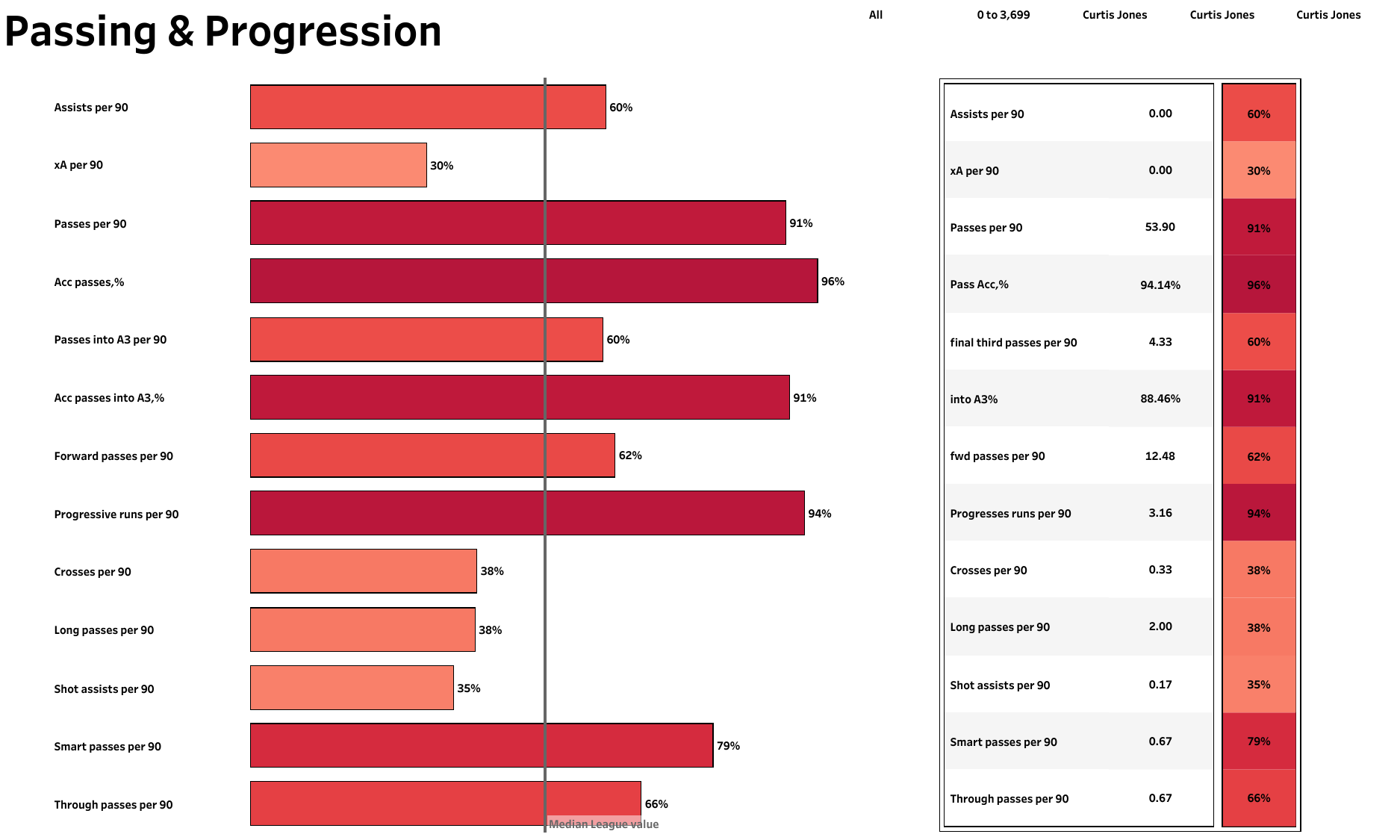 Curtis Jones is a great passer and possesses the skills to become a great midfielder. He has a pass accuracy of 94.14% and has attempted approximately 50 passes on average. He has attempted 12.48 forward passes and tries to get the ball into the opposition’s half. When Liverpool are in positions, it is the job of their central midfielders to rotate the ball quickly and create space for their full-backs in the wider areas. Jones has provided three assists so far in all competitions. 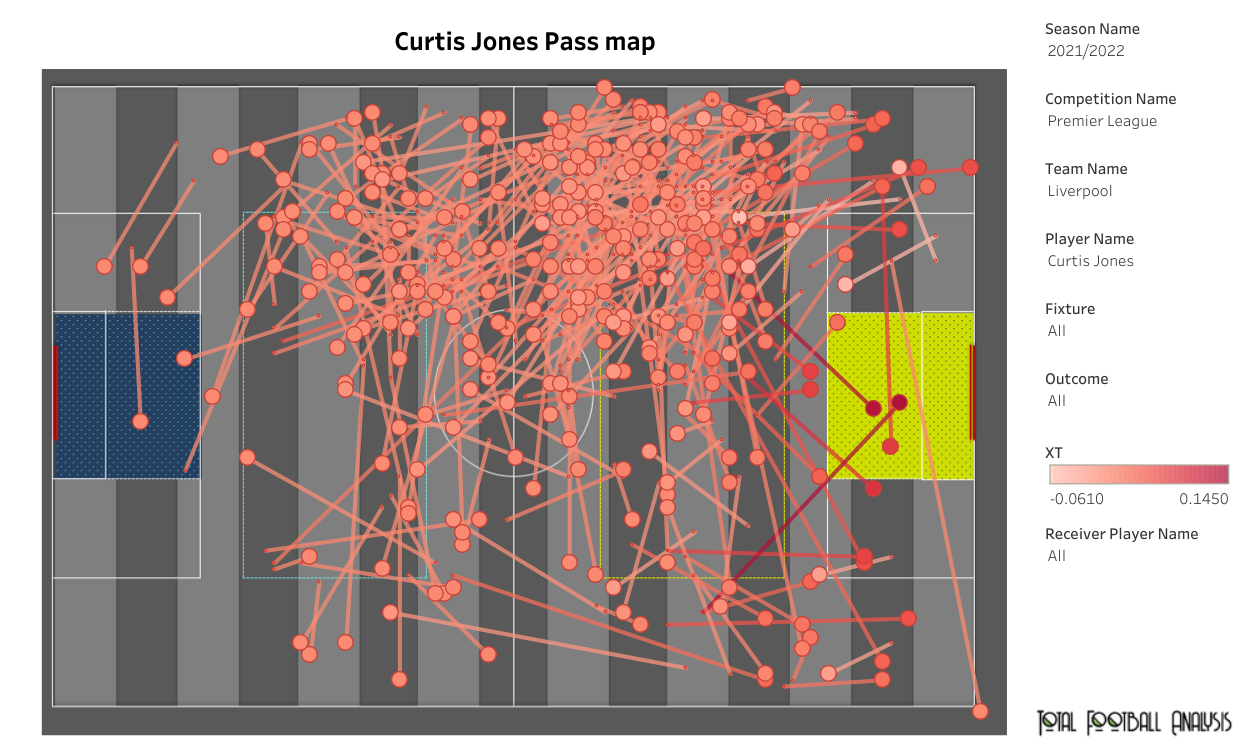 There is a high-caliber player in Jones, but speculation still mounts over where his best position on the pitch is. With the recent arrival of Luis Díaz, his chances of being utilized on the left side of the front three again are slim to none. Jones needs to shine in midfield and demonstrate that he warrants a place alongside Fabinho and Jordan Henderson. He’s sparkled in patches, but the final stages of this season could be crucial in outlining his Anfield future.

Born and raised in Liverpool, it is difficult to imagine Jones playing in any other club colors. It’s not only his affection for the Reds that make a departure unlikely, but as stated, his characteristics perfectly suit the ones his team needs. The only risk he faces is competing for playing time, as he is playing in possibly the best club in the world, and to get into the starting lineup, he will have to put players of the caliber of Thiago, Naby Keita, and Henderson on the bench.