Harvey Elliott returned to Liverpool’s first-team training last week for the first time since September. The 18-year-old has been recovering from ankle surgery due to a dislocated ankle he suffered against Leeds United. Elliott dislocated his ankle when Leeds’ centre-back, Pascal Struijk, collided with him, challenging for the ball.

The injury was devastating for Elliott, who was just four matches into his Premier League career after a successful season on loan at Blackburn Rovers in the Championship. Elliott beginning training just four months after the injury is a very positive sign for the young Englishman as well as for the club. He can provide some creativity in the midfield, something that has been lacking for the Reds lately, as they attempt to threaten Manchester City’s lead at the top of the Premier League table and also compete for European glory.  More importantly, he will continue to develop into the future face of English football as Liverpool continues to make their midfield younger.

Liverpool have changed their system slightly this season to bring more creativity from midfield. However, the change has been hampered with all of their creative midfielders suffering injuries. They have had continuous injuries to their attacking midfielders, which has left Jurgen Klopp still searching for the perfect midfield combination so far. 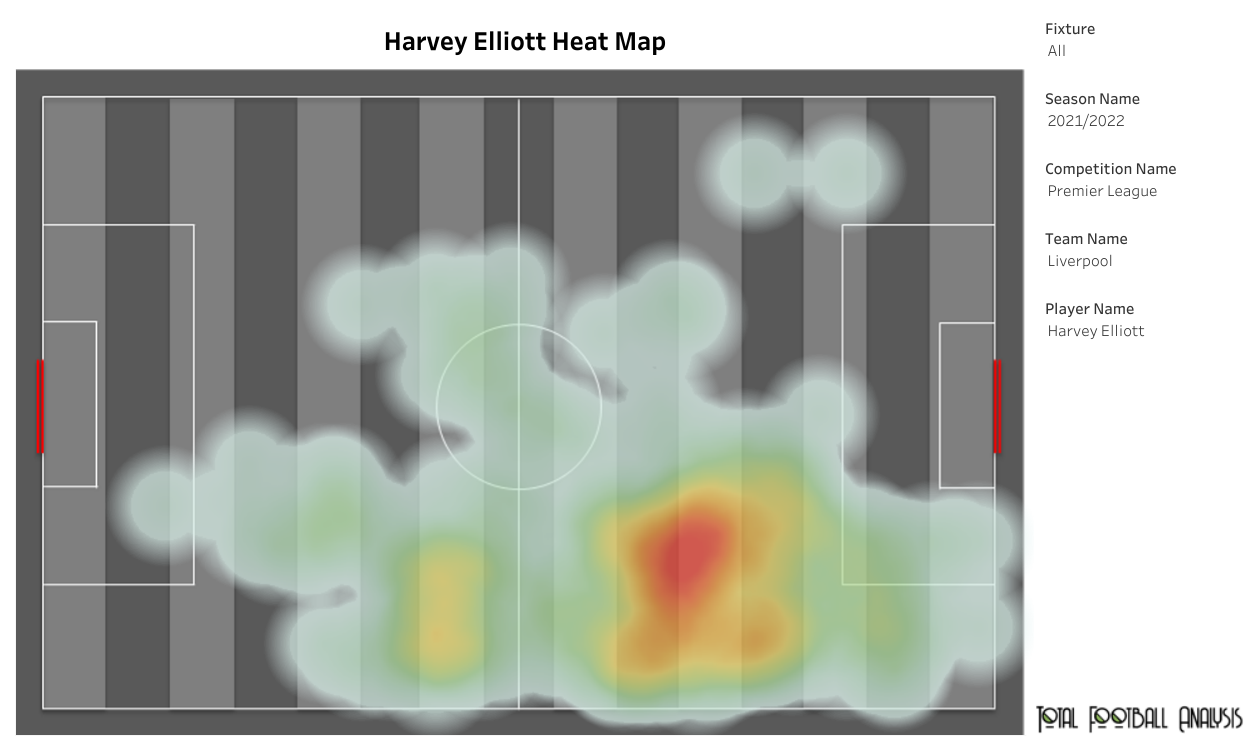 Elliott is naturally a right-winger who was shifted to a wider midfield role by his manager at the start of the season. His heatmap indicates that he has predominantly played on the right side of the midfield in his four appearances in the Premier League. Since the start of the season, it was seen that Klopp allowed his attacking midfielders more freedom, and they were asked to not only push forward but were also allowed to drift into wider positions. Harvey Elliott fit into that role perfectly and had adjusted into that position brilliantly. 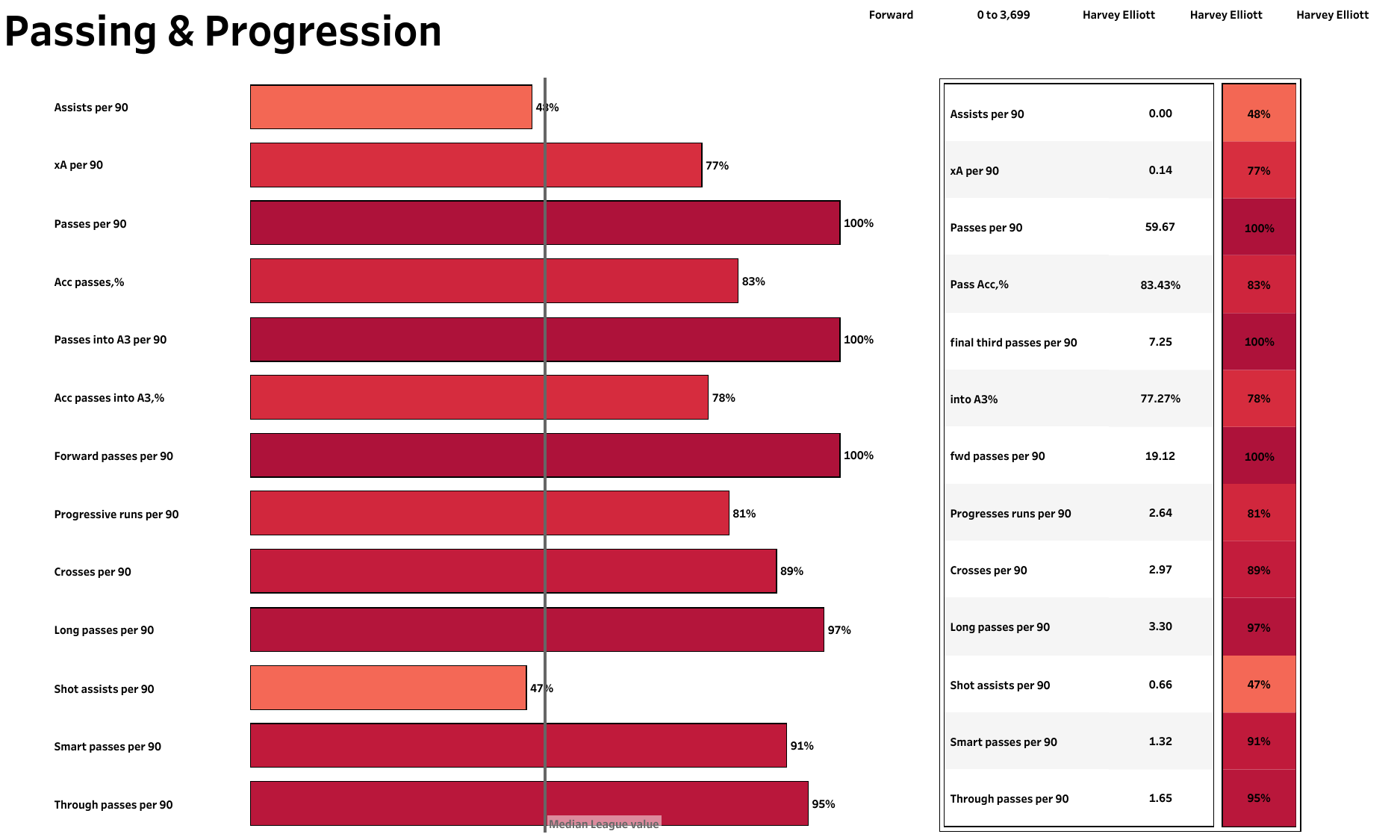 The above visual shows us the passing and progression stats for Elliott in the Premier League. Elliott attempted 59.67 passes on an average with a pass accuracy of 83.43%. He is a player who loved to carry the ball into the final third and can drive the team forward. He has attempted 7.25 passes into the final third with an accuracy of 77.27%. The young midfielder has also made 2.64 progressive runs per 90 minutes. 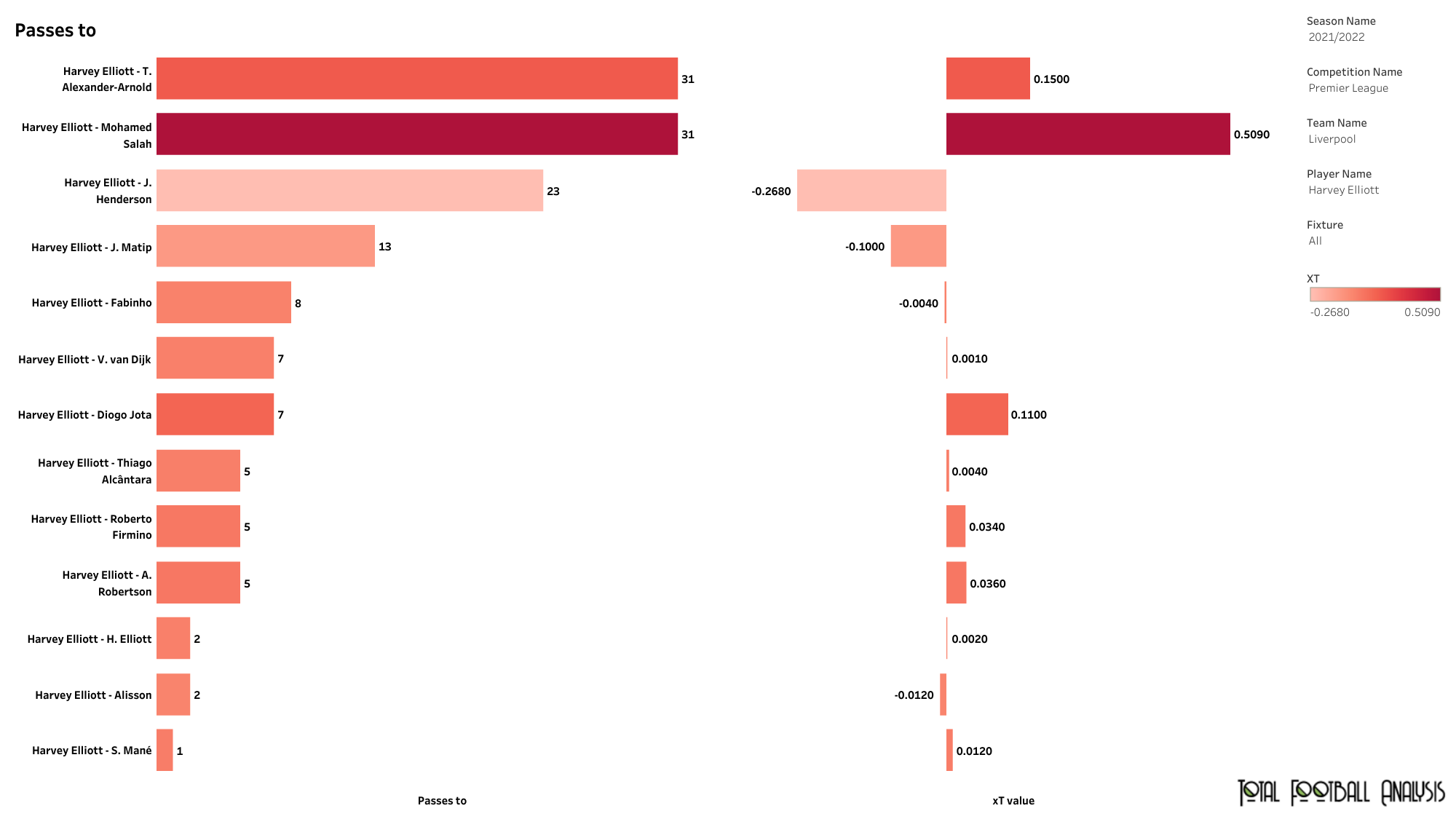 Elliott was destined to play a huge part in Liverpool’s season before his injury, and the most exciting aspect was the dynamic relationship that he formed with Alexander-Arnold and Mohamed Salah on the right-hand side. He had a brilliant understanding with the forward and full-back and was combining well with them to construct attacks from the right side of the pitch. The above visual indicates the same, as he played 31 passes each to Alexander-Arnold and Salah, and generated a high xT value from his passes to them. He generated the highest xT from his passes to Salah. 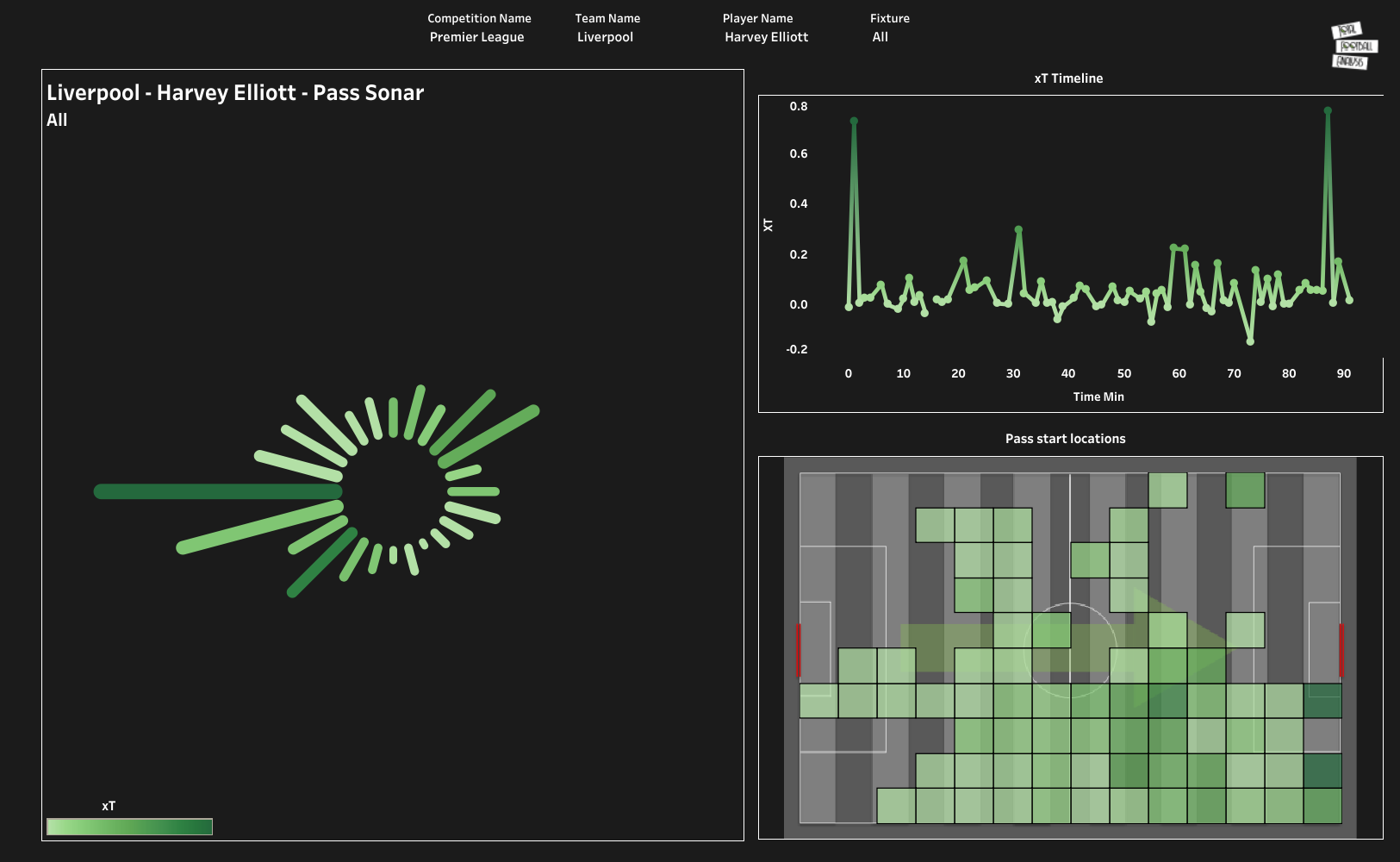 The above visual shows us the pass sonar for Elliott as well the pass start locations for the passes he has attempted. The pass sonar indicates that he has had the highest xT from his passes that he played towards his left, which is understandable because he plays on the right side of the midfield. The pass start locations indicate that most of the passes he has played from the final third have generated a high xT.

Harvey Elliott’s return will provide the Reds with a solution to their creativity issues as well as their defensive vulnerabilities. Elliott’s performances at the start of the season showed that he can handle the pressure even at such a young age and can cement his place in the starting XI if he can put up similar performances after returning to full fitness.