Fabio Carvalho is set to join Liverpool on a five-year contract in June, once the summer transfer window opens.  Liverpool were linked to Carvalho in this winter’s transfer window, but they failed to finalise the deal at the very last moment. Carvalho will join fellow Portuguese, Diogo Jota, and look to find a place in Liverpool’s incredible attack.

The 19-year-old has established himself as a regular in Marco Silva’s Fulham side in his maiden season as a full-time senior player, contributing eight goals and seven assists in 32 games. Carvalho, an exciting attacking midfielder who is capable of playing out wide or deeper in midfield, has risen through the youth ranks at Fulham, having first started at Benfica’s academy.

Carvalho has played primarily as an out-and-out number 10 this season in a 4-2-3-1 system at Fulham, but that is not necessarily his best role, not the one Liverpool will have in mind. Jurgen Klopp has not played with a number 10 at Anfield, with players like Curtis Jones, who would perhaps be naturally suited to that role, having been adapted to fit his 4-3-3. Carvalho has all the attributes and skills to be able to undertake a similar transformation, with the view that he would be better suited to playing in a midfield three for Liverpool when he arrives at the club in the summer. 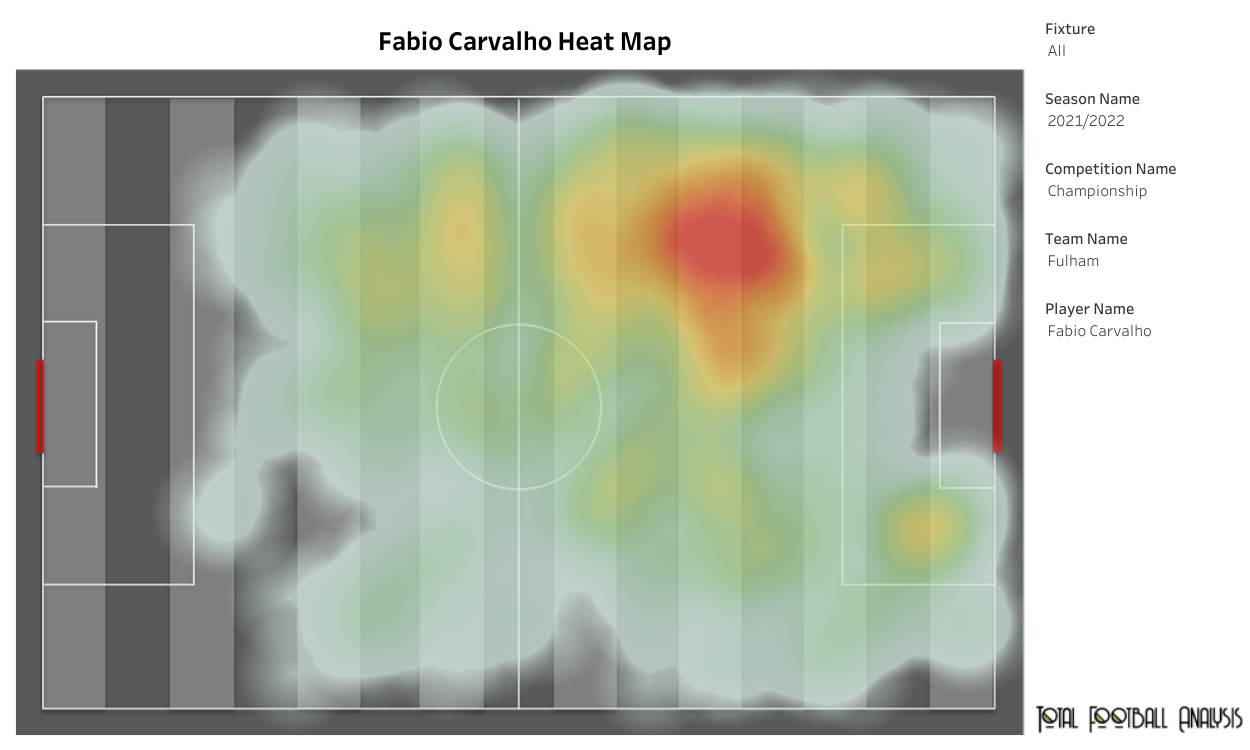 Carvalho has been starting as a number 10 in most of the games he has featured in. He loves receiving the ball at his feet and then dribbling into the final third on the turn. His heat map shows that, at times, he has drifted to the left flank to create space and get into positions from where he can put the ball into the penalty area. Carvalho can play the role of a wide midfielder at Liverpool who can combine well with Klopp’s full-backs. 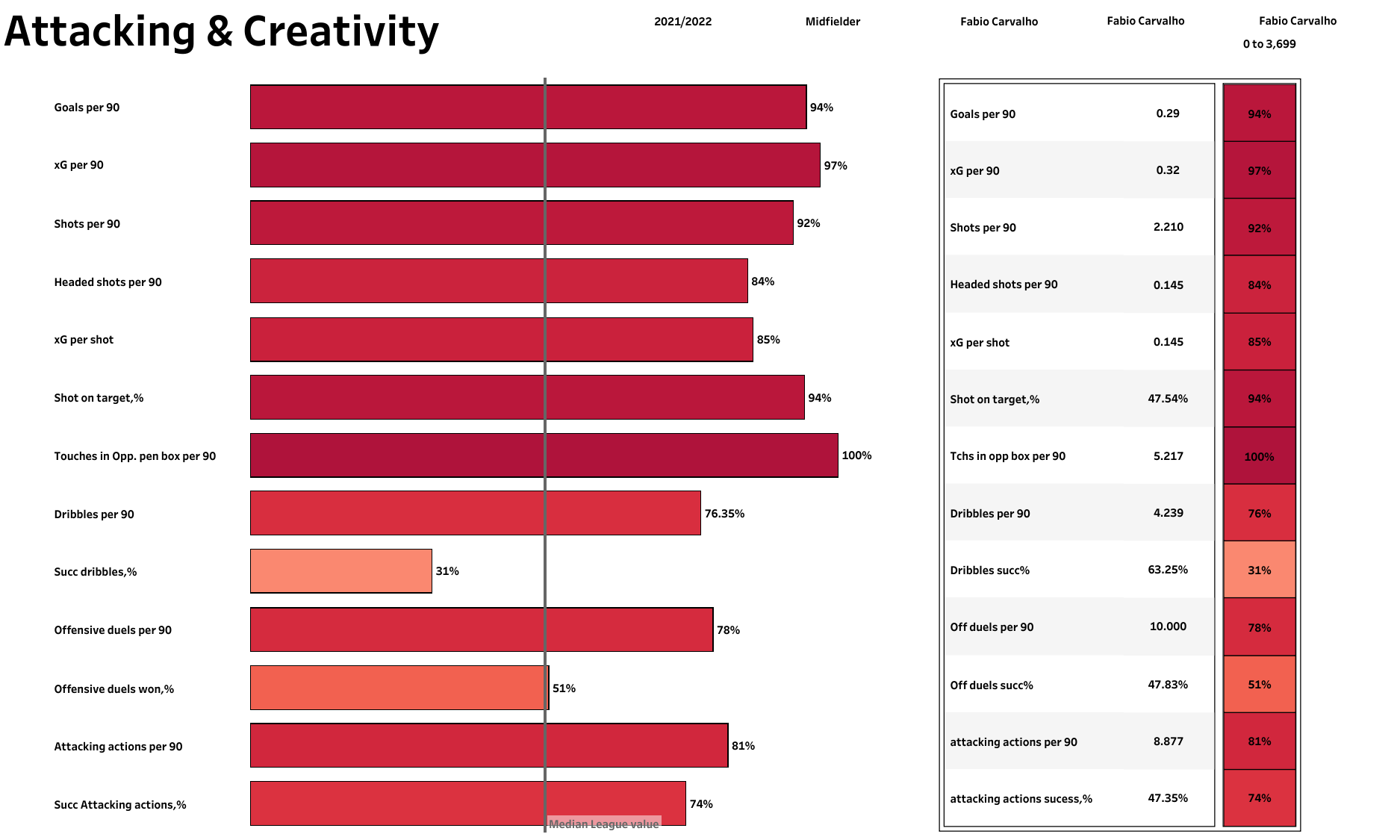 The above visual shows us his attacking and creativity stats from the 2021-22 Championship season. The midfielder has made 30 appearances for Fulham and managed to score seven goals and provide seven assists. When looking at the above chart, the general rule is that the longer the bar, the better the performance – you can see the league average in the middle, and the percentage is the percentile rank the player is in. The youngster has one of the best goals per 90 and the expected goal rate in the league. He has taken 5.217 touches in the opposition box per 90 minutes and has completed 47.35% of the total attacking actions he has attempted. 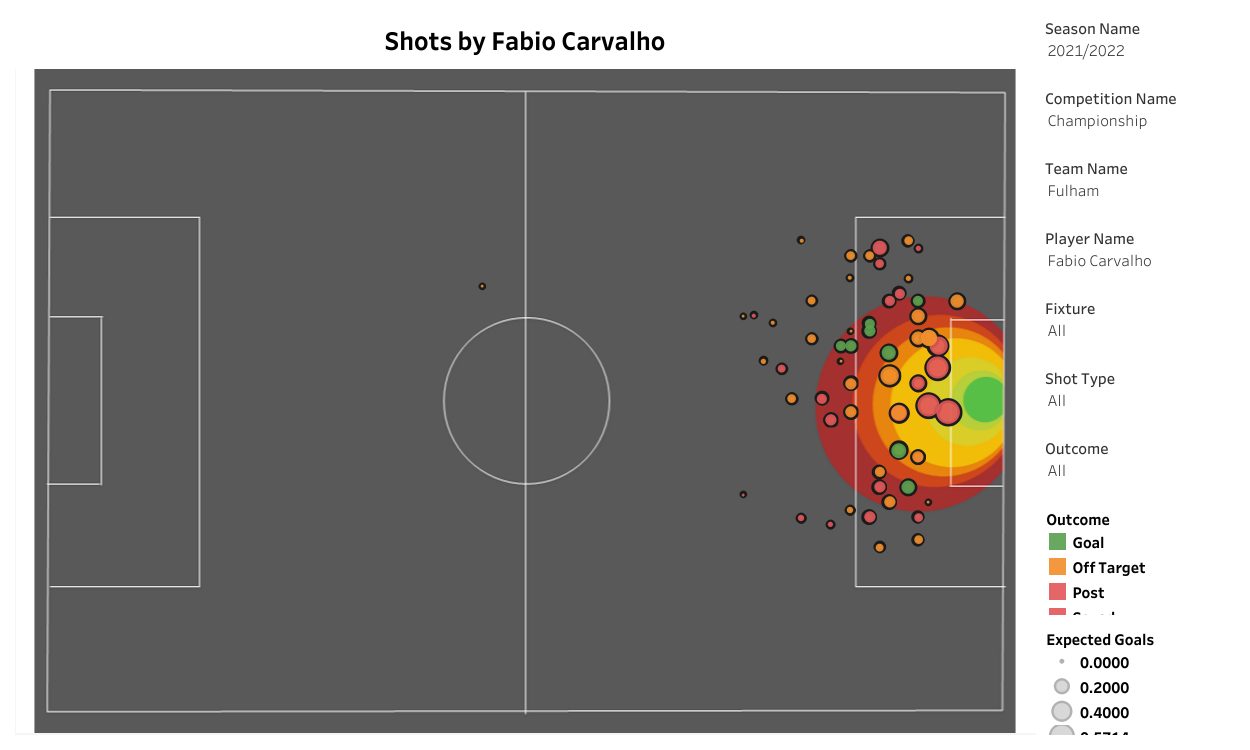 Carvalho has all the skills required to be a top performer in a midfield three for Liverpool. He is particularly talented at receiving the ball to his feet in midfield with his back to goal and spinning quickly to face the other way, allowing him to drive forward into the final third. He has a great first touch and his close control is magnificent, which allows him to play in tight spaces inside the box. He has attempted 2.210 shots on goal per 90 minutes, with almost 50% of these shots on target. 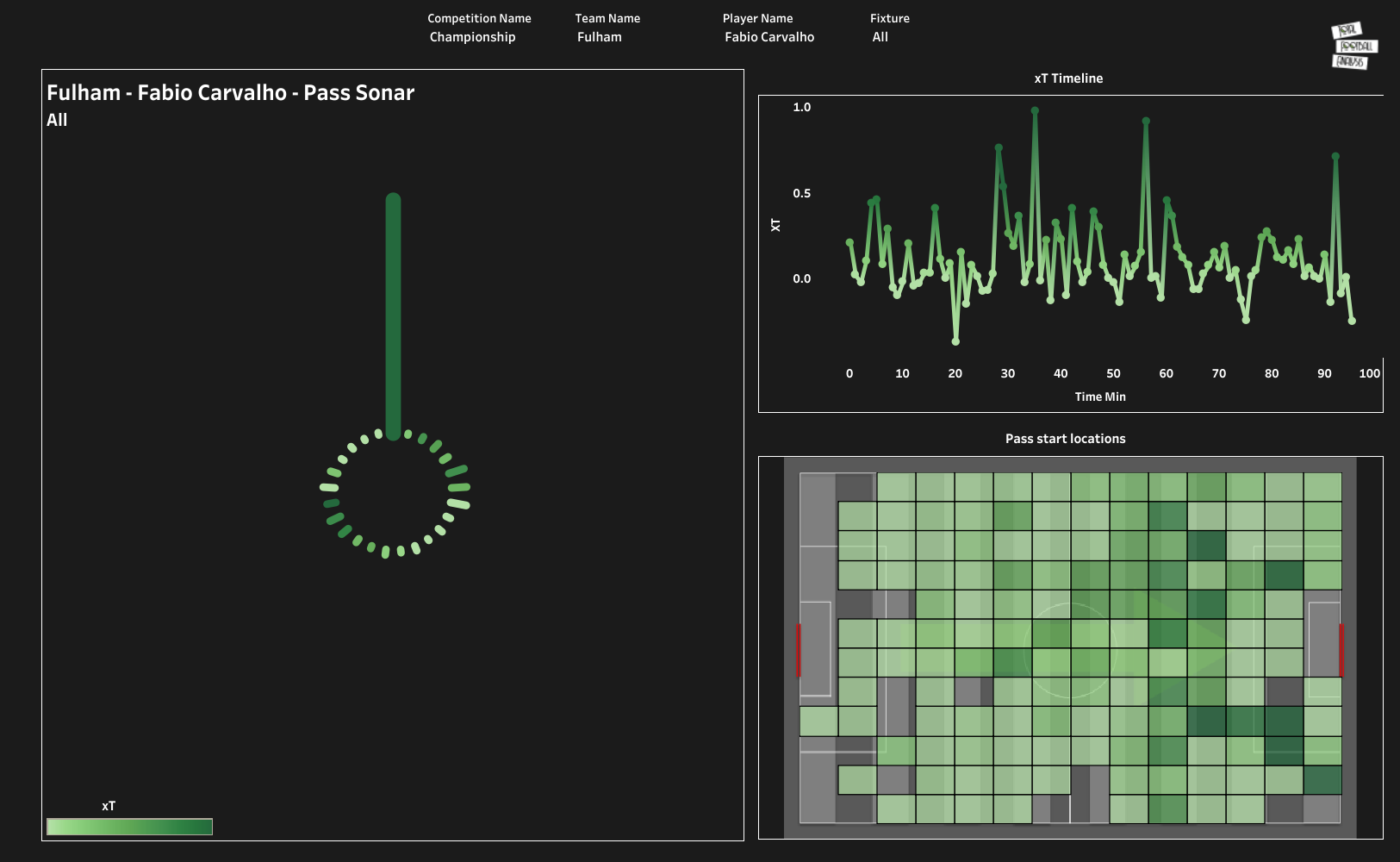 Carvalho is a quick, agile dribbler who can be inventive and make a lot of critical passes while maintaining his composure on the ball. He is a direct runner, and his stats show that he is both a goalscorer and a playmaker. The pass start locations indicate that he has a very high xT from his passes on the right flank and also some central areas near the edge of the penalty area.

Although it might be hard for Carvalho to get into the starting XI in his first season with the Reds, he will get enough chances to prove himself to his manager. Jurgen Klopp has been building for the next generation and has several young players who are certain starters for Liverpool in a couple of years. The future core of Trent Alexander-Arnold, Harvey Elliott, Curtis Jones, and now Fabio Carvalho will ensure Liverpool are competitive for the next decade.