Liverpool reignited the Premier League 2021-22 title race and came within a point of the top spot with a 2-0 win over Arsenal after scoring two second-half goals to extend their winning streak to nine games. Diogo Jota and substitute Roberto Firmino found the net after a flat first-half performance from the visitors at Emirates Stadium. Liverpool now has 69 points, one behind Manchester City, who slipped up with a 0-0 draw against Crystal Palace on Monday.

Bobby Firmino came on to replace Diogo Jota who had scored the first goal for the Reds. Firmino had an instant impact as he came on to score the second goal for Liverpool and give them a comfortable 2-0 lead in the fixture. Firmino may not be a regular in Jurgen Klopp’s starting XI anymore, with only 13 starts this season. However, he is a very handy footballer to have on the bench.

First Firmino took the ball from Arsenal central defender Gabriel and crossed for Salah as he came close to scoring a second for their team. Then, as Arsenal cleared and desperately tried to move the ball away up the line on the other side, Robertson took it from Bukayo Saka and delivered a low pass that Firmino diverted home at the near post. He was then in the right place to turn home Andy Robertson‘s cross from the byline shortly after with a skillful flick as he put the ball past Arsenal keeper Aaron Ramsdale. 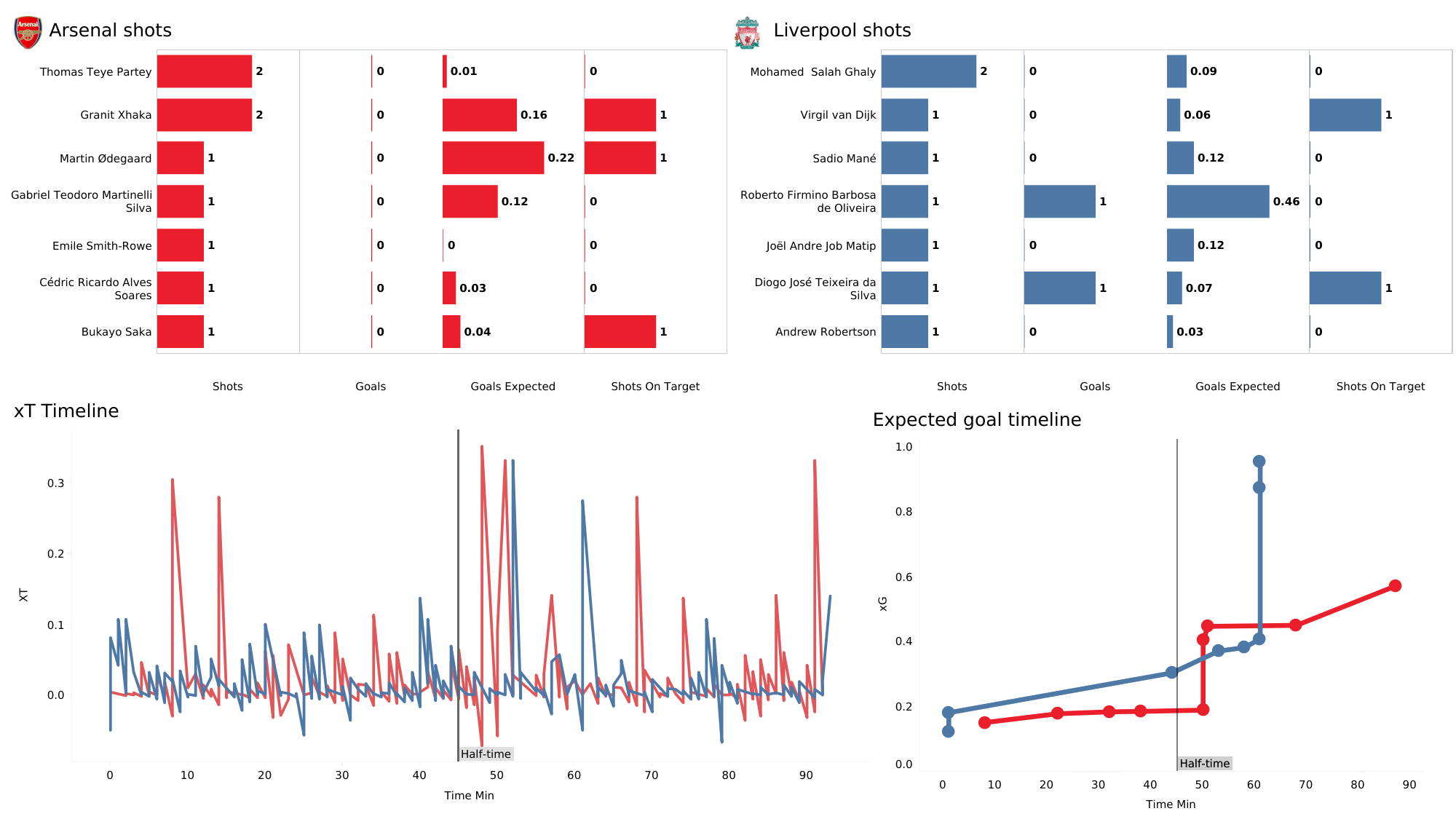 The above visual shows us the attacking stats from Liverpool’s game against Arsenal in the Premier League. Firmino only had one shot on goal which he converted, indicating how effective the Brazilian is in the final third. He generated the highest xG than any other player on the pitch, and his goal was a crucial turning point in the game. 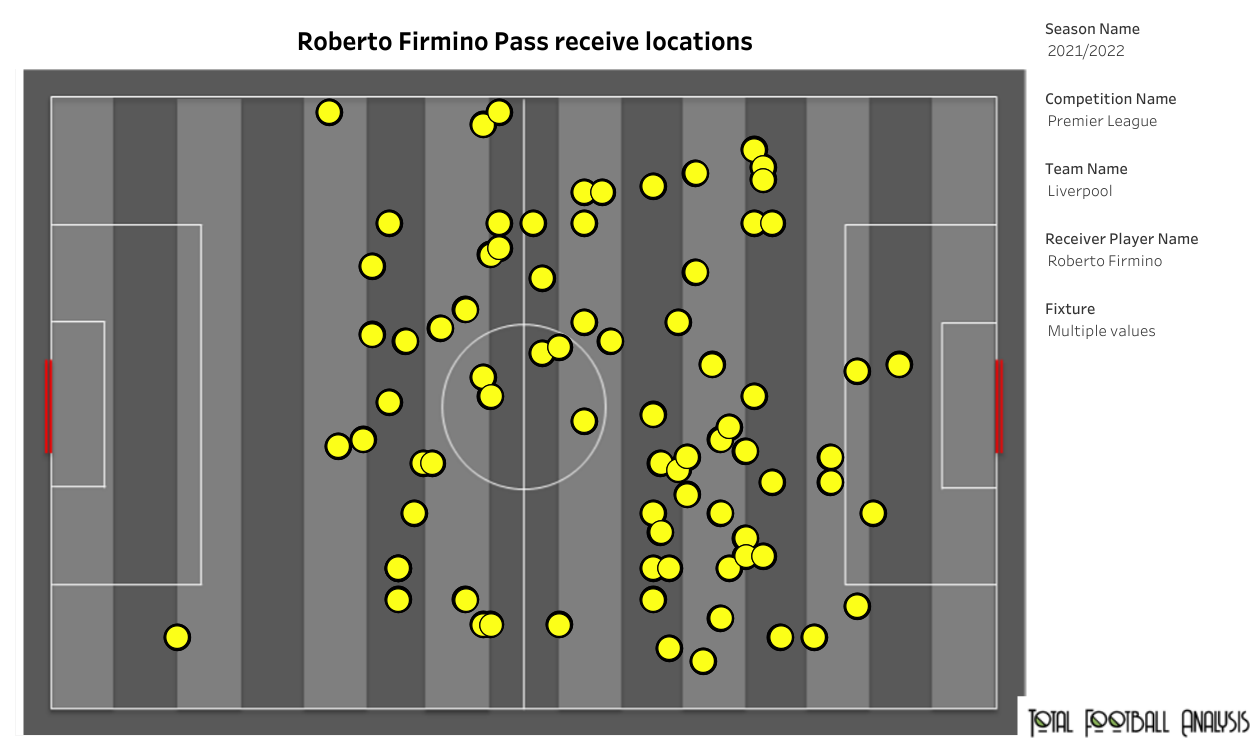 The above visual shows us the pass receive locations for Bobby Firmino in all of the games that he has come on as a substitute. Firmino has come on as a sub in eight Premier League games and has been a great option to have on the bench. He is not a conventional number nine who plays with the last line of the defense. He prefers to drop deep, receive the ball, and play it to his midfielders to create space for his wide forwards who can move inwards. His pass received locations show how deep Firmino drops to receive the ball and also drifts to wider areas to support his wide players. 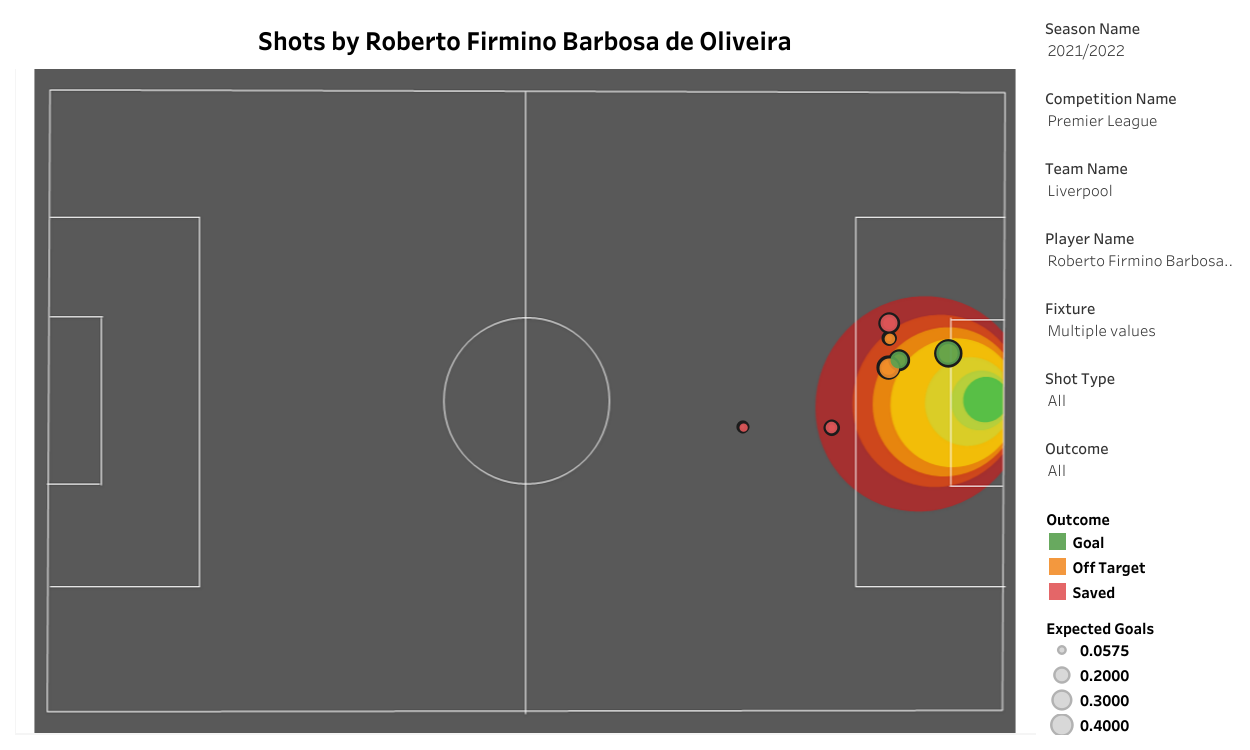 Firmino has attempted seven shots after coming on as a substitute and has had five of these shots on target. He has averaged 1.81 shots per 90 minutes and has an average xG of 0.45. Firmino always manages to get into great positions inside the box when his full-backs have the ball in wider areas inside the final third. He is like a fox in the box and pounces on any ball played into the 18-yard area. 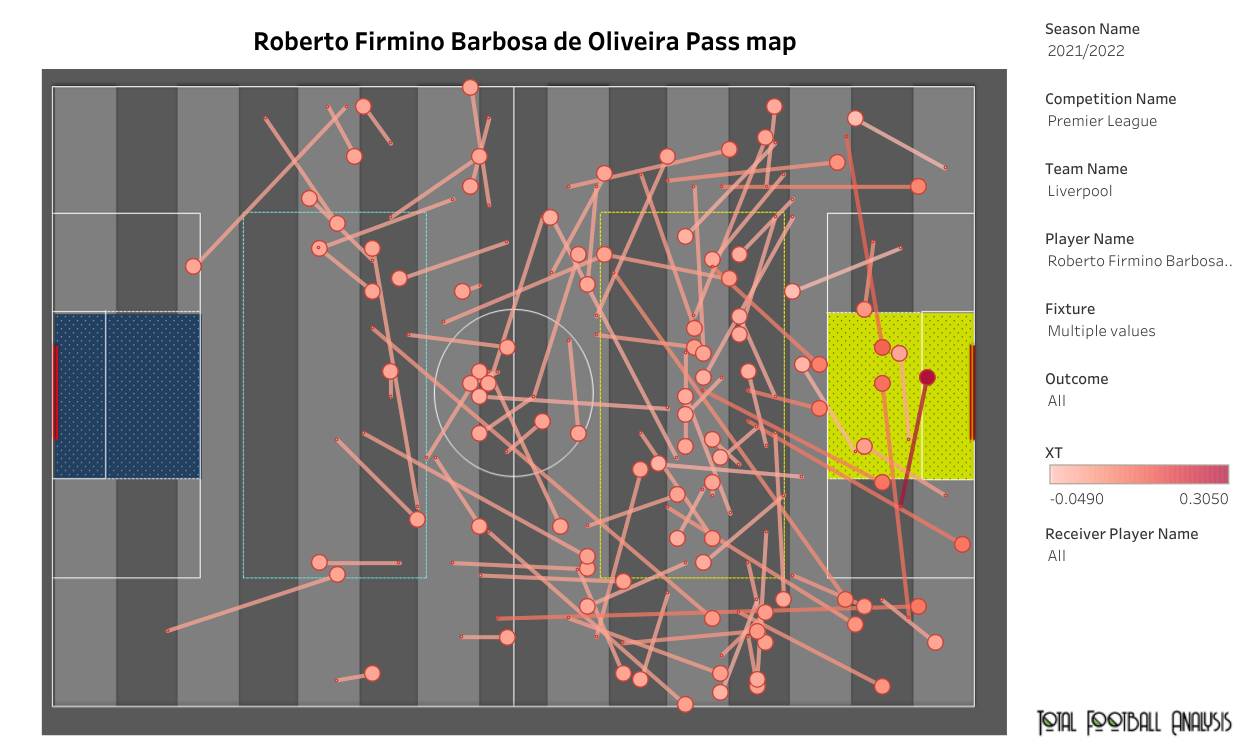 Firmino is considered as more of a playmaker than a striker, as the Brazilian has always been an assist provider for his teammates. He has great awareness inside the final third to spot the runs made by his teammates. His pass map shows us that the passes he has played into the penalty area have generated a high xT.

With the arrival of Luis Diaz, Jurgen Klopp now has plenty of options to select from in his front three. Liverpool are still playing for all trophies domestically, as well as in Europe, and will need this depth towards the end of the season. In Firmino, Klopp has a striker who knows what is to be done when he is sent on the pitch and does exactly what his manager wants. Although he might not be a regular starter this season, Firmino still proves to be an important player for his manager.