Liverpool will face one of the biggest tests of their season when they host Manchester City in the English Premier League. Both teams went to the wire last season in the league, and the title was decided in the final gameweek of the season. However, things have not gone well for the hosts, who are currently sitting in the middle of the table. Manchester City are still unbeaten in the league and are the favourites to win the league this season.

Liverpool are winless in their last three games and are sitting in the tenth position with two wins, four draws, and two losses. The Reds suffered a 3-2 defeat against Arsenal in their last match. Jurgen Klopp’s men have scored 20 goals and average 2.27 xG per match. Their defence has conceded 12 goals and that is the biggest concern for the manager.

Manchester City, on the other hand, are one point behind the league leaders. They have won seven and drawn the other two matches. Pep’s men have managed to score 33 goals this season and average 3.67 goals per match. They average 2.57 xG per match. The defence has conceded nine goals.

Both teams are capable of scoring goals against each other, and this could turn out to be a high-scoring game. Liverpool and Manchester City like to keep hold of the ball and create chances against their opponents. Liverpool averages 584 passes with an accuracy rate of 85.3% per match. They create 41.1 positional attacks and 2.1 counterattacks per match. Manchester City have a high average of 690.56 passes and the accuracy rate is 91.1%. The visitors make 35 positional attacks and 2.33 counterattacks. 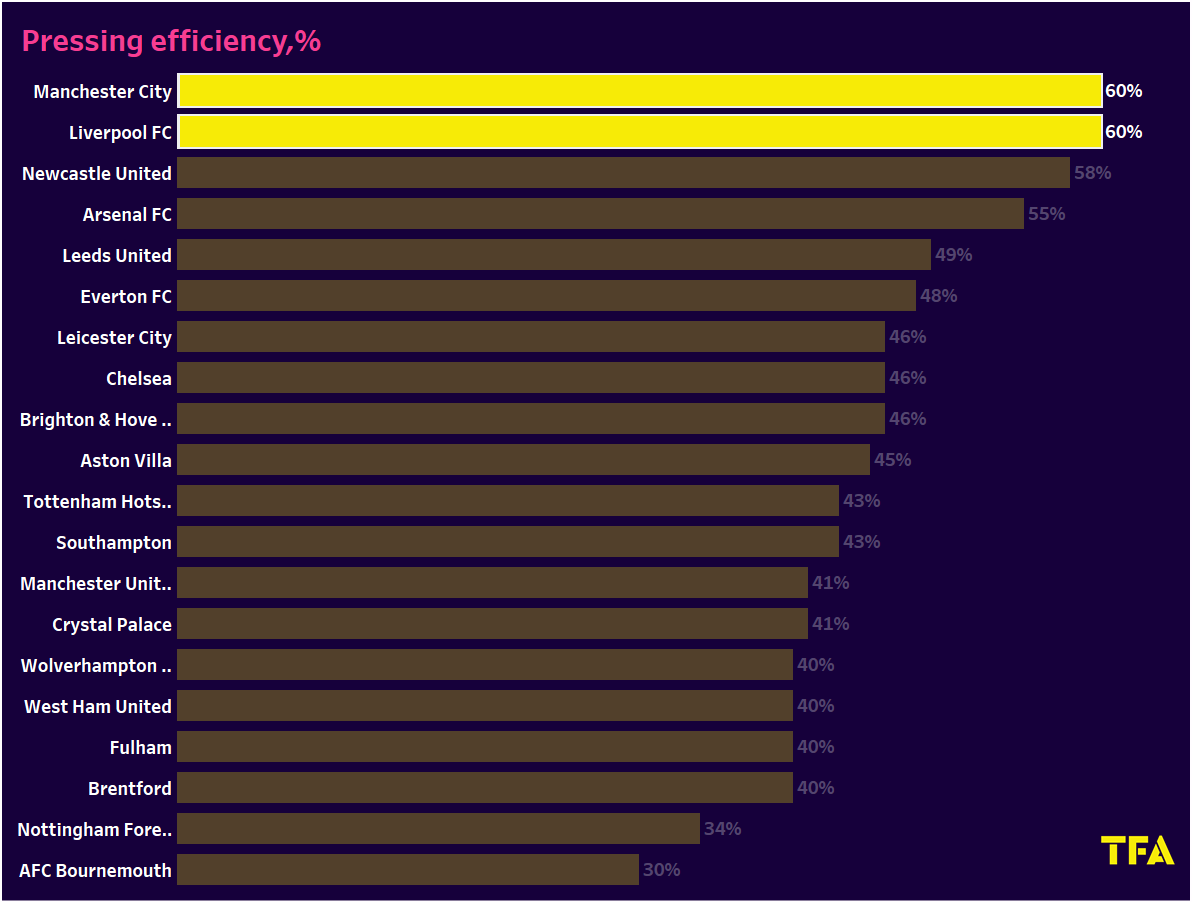 Manchester City and Liverpool have a high possession rate of 67% and 64% per match, respectively. This high rate of possession is maintained due to their high pressing efficiency. The players do not allow their opponents to operate freely and constantly put pressure on them to make mistakes. 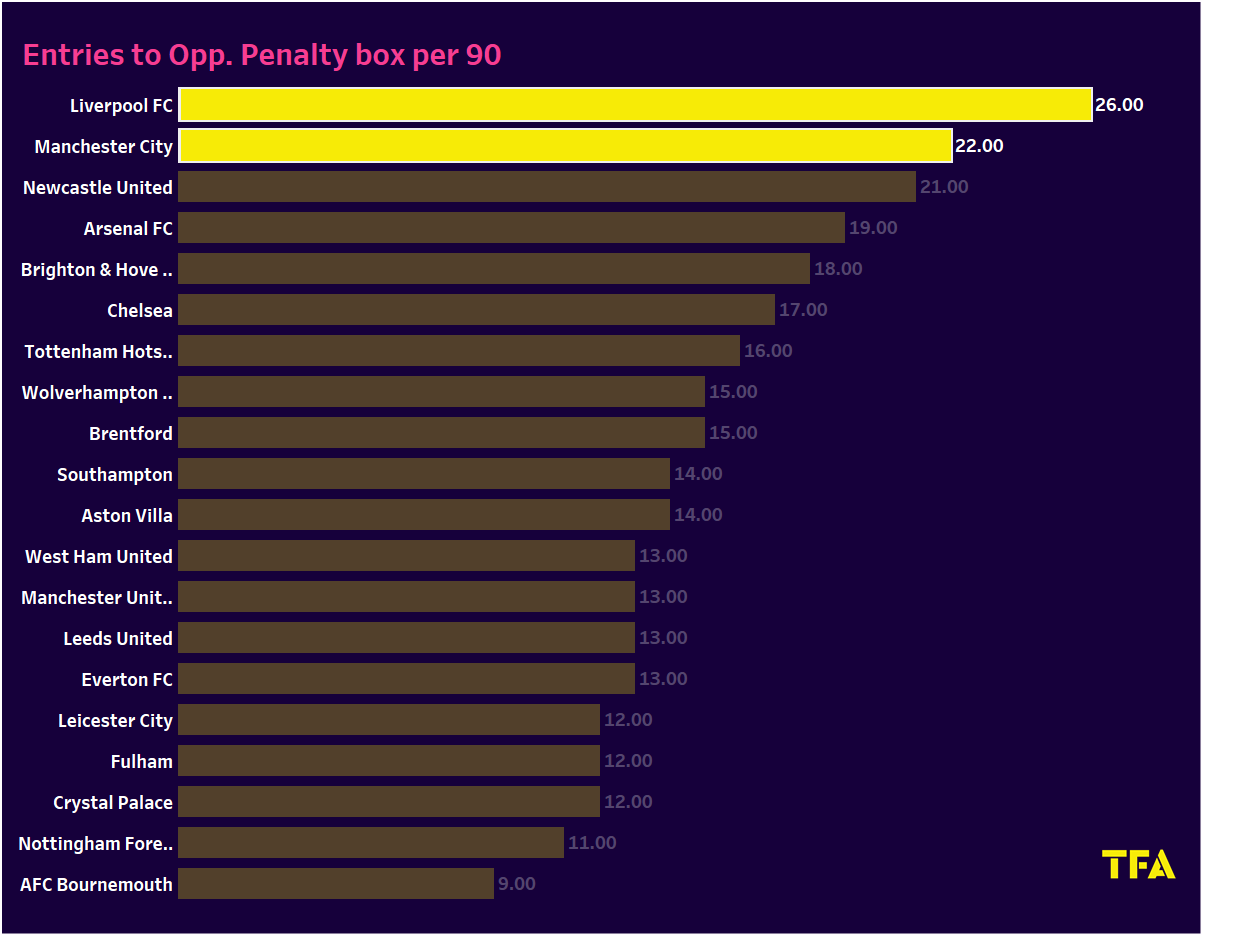 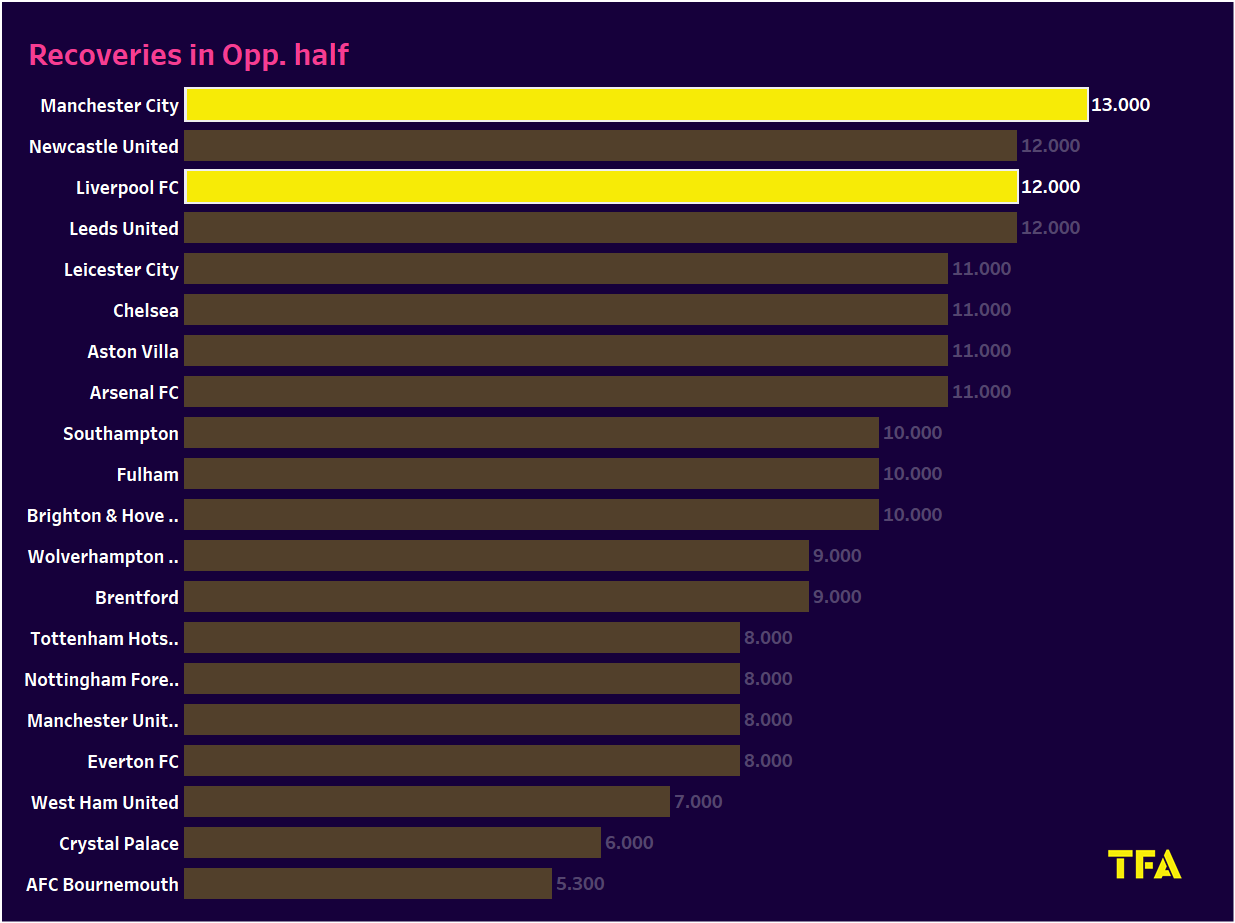 Liverpool players lose the ball more than Manchester City. Klopp’s men average 117.7 losses per match, while City only averages 76 losses. The recovery rate is 97 for Liverpool and 75.3 for Manchester City. This shows that Manchester City have been more patient in their attacks and do not like to lose the ball that easily. They have also made the highest number of recoveries in the opposition half. Liverpool will have to be more disciplined in this game. 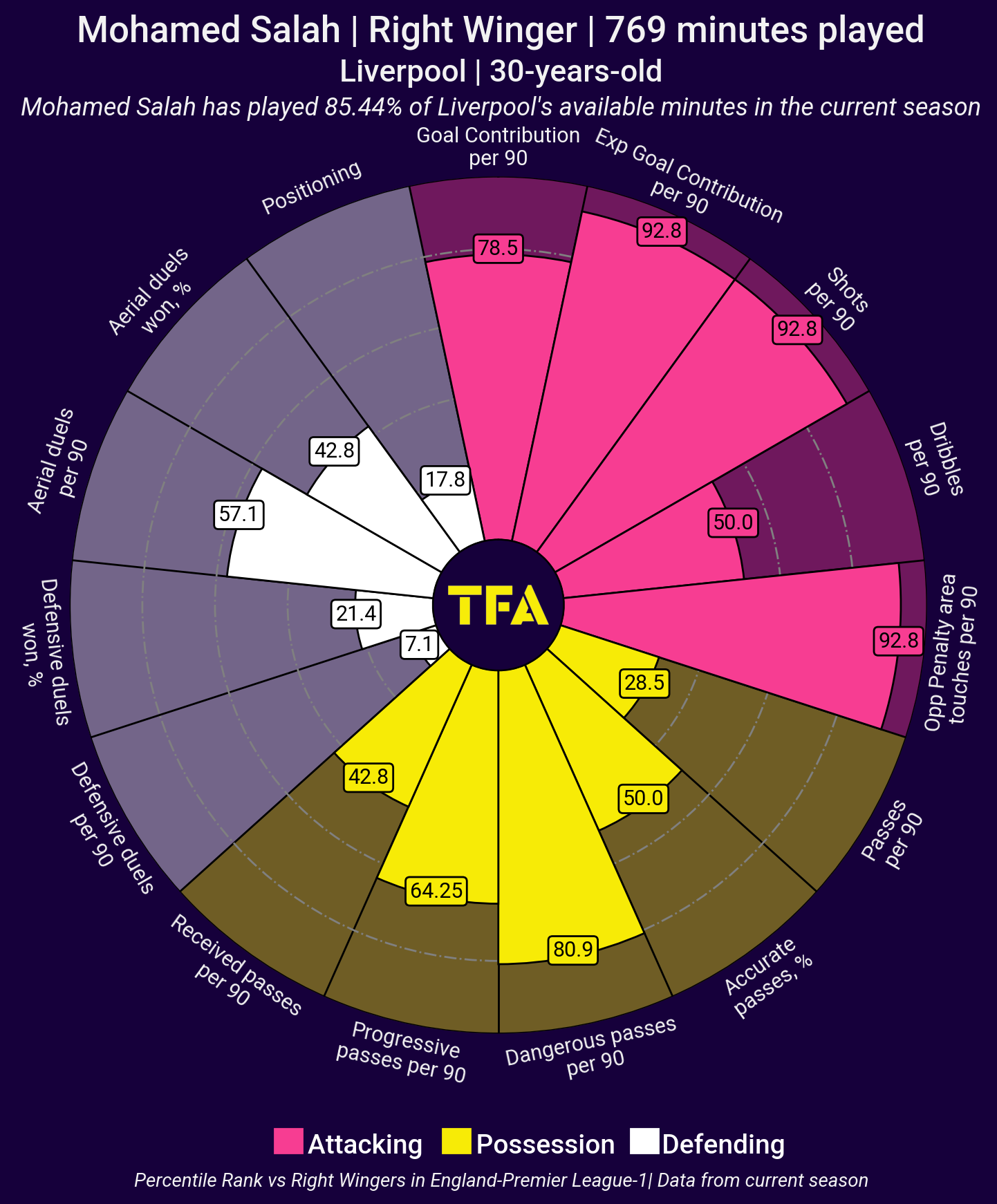 Mohamed Salah is on a five-match goal-scoring drought in the English Premier League. However, the forward will carry the most threat for Liverpool in this game. He scored a hat-trick against Rangers after coming off the bench and will be high on confidence going into this game. The Egyptian forward has scored two goals and has three assists to his name in the league. The above viz shows the percentile rank of Mo Salah in comparison to the other right-wingers in the league. He is one of the best players in the league and is highly ranked for shots, xG, dangerous passes and touches inside the opposition penalty area per 90 minutes. Salah has five goals and three assists to his name against Manchester City in ten appearances in the English Premier League. He will be a key factor in this match. 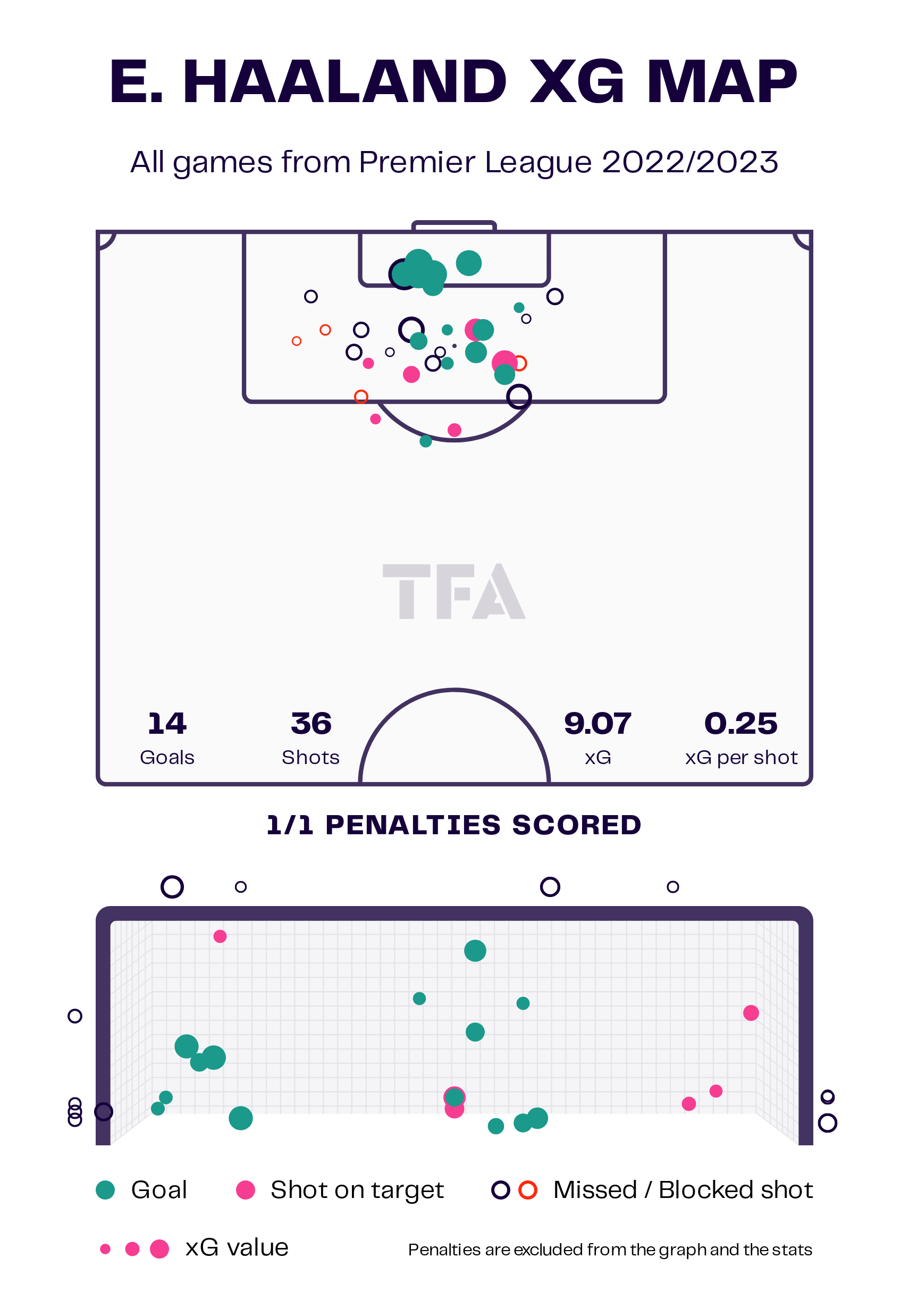 Erling Haaland will play his first match at Anfield, and he will be hungry to add more goals to his overall tally of 15 goals. The striker averages four shots per match and also has a high xG rate. The Norwegian striker failed to score the last time these two teams met in the FA Community Shield. That was the first time Haaland played a competitive match for Manchester City. This time he won’t be an easy force to defend for this Liverpool side. Haaland’s shot map shows that the striker has scored a few goals from inside the opposition penalty box. He will look to get into such spaces and score goals.

Liverpool have a few injury crises and will be without Joel Matip, Luis Diaz, and Trent Alexander-Arnold for this game. Andy Robertson and Curtis Jones might return to the team.

Kyle Walker and Kalvin Phillips will miss the fixture for Manchester City. John Stones missed the midweek game and might feature in this one.

Liverpool will make it hard for Manchester City to take three points from this game. The defending champions are in much better form in the English Premier League and will look to take three points and remain close to Arsenal. This is one of the biggest matches in the title race.