Last week I talked about how the progression we made during pre-season and how I was satisfied that we were ready for the start of our first season as manager of Liverpool Football Club. I outlined a few key tactical aspects, which we will reflect on in this article, using the brilliant in-game data hub. I have absolutely fallen in love with the data hub in FM – it provides moments of pride and joy when you see a set of statistics that make you look like a tactical genius, but it is also an extremely useful tool to identify areas to improve.

First things first, a quick update about my 3-4-3 system I posted in last week’s article, which you can view here to jog your memory. I quickly felt uneasy with the tactic and knew something needed to be changed but I was cautious of making too many changes – I was well aware that the system already had some strong points, it just needed some fine-tuning. As I mentioned in the last article, this is one of the extremely rare times where I have created my own tactic from scratch (rather than basing one off an in-game or community-created tactic), so this 3-4-3 is like my baby – feel honoured and privileged that I am sharing it with you! 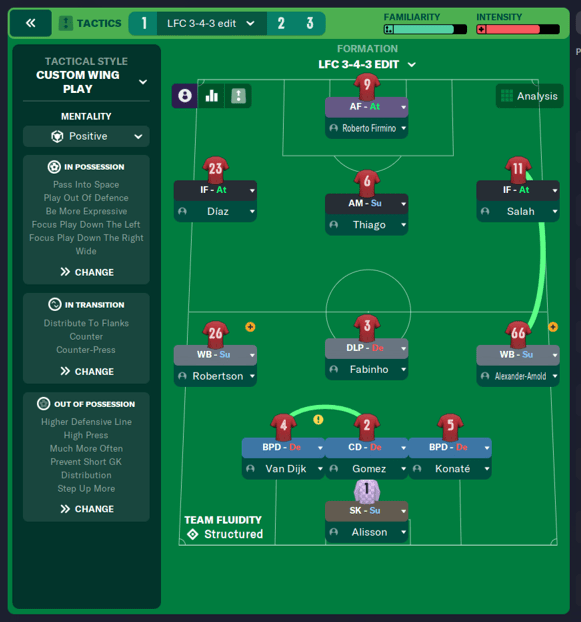 In a nutshell, these are the tweaks I have made:

Of course, it is early days in the season, and I shouldn’t get too carried away, but the signs are promising. As you can see from the list of results below, we have made ourselves known already, settling into this new system much quicker than I anticipated. 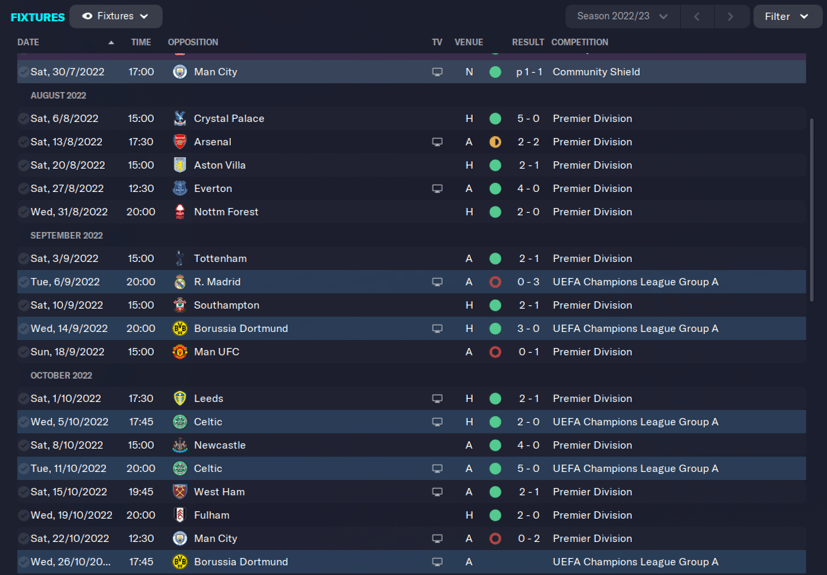 I don’t want to waste time discussing the results themselves but focusing on the games we have lost so far, there are tactical elements that clearly need work, but then again, losing to Real Madrid, Manchester United and Man City isn’t particularly worrying, especially since all of those games were away! Furthermore, I have no concern about turning up for “big games” – just look at some of those wins (bonus points for battering Everton in their own backyard)! My major concern with the defeats is that we didn’t score in any of them, so finding a plan B in terms of tactics is on the to-do list.

Drilling into the data behind our impressive start is what really interests me. As the data hub has such a dense catalogue of areas to analyse, I want to focus on our attacking performance this time around, with a microscope on two key areas that I outlined previously – wide play and set pieces. 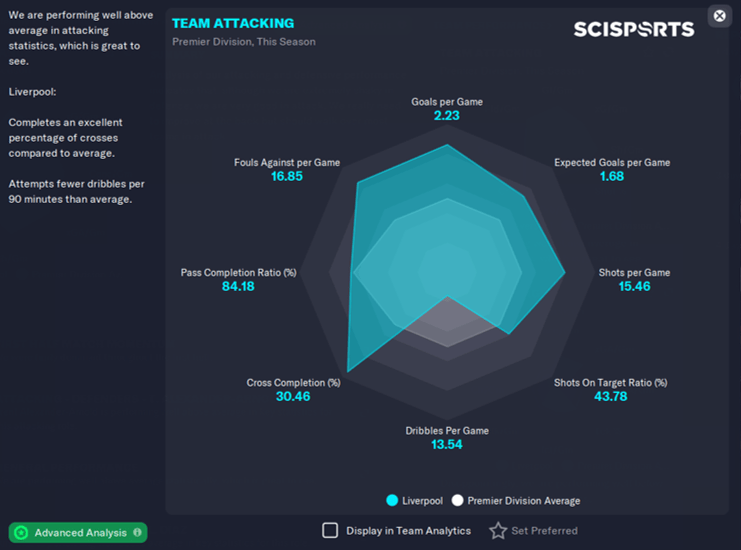 Our attacking game overall is what you would expect from a Liverpool team – plenty of goals and attacking chances. There are two stats in the polygon above that took me by surprise in different ways. An average of 13.54 dribbles per game is significantly lower than the Premier League average – I headed over to the league stats screen to take a close look and we average the second-lowest number of dribbles per game. My initial reaction was one of disappointment and worry. But then I asked myself “is this really a weakness?”. While it is surprising that we dribble so rarely, my system doesn’t rely on it until we reach the final third.

I was very pleased to see our cross completion looking that good as it is the staple of our attacking approach. Substantially better than the league average is always a good thing, but we’ve gone one better than that so far – best in the league. 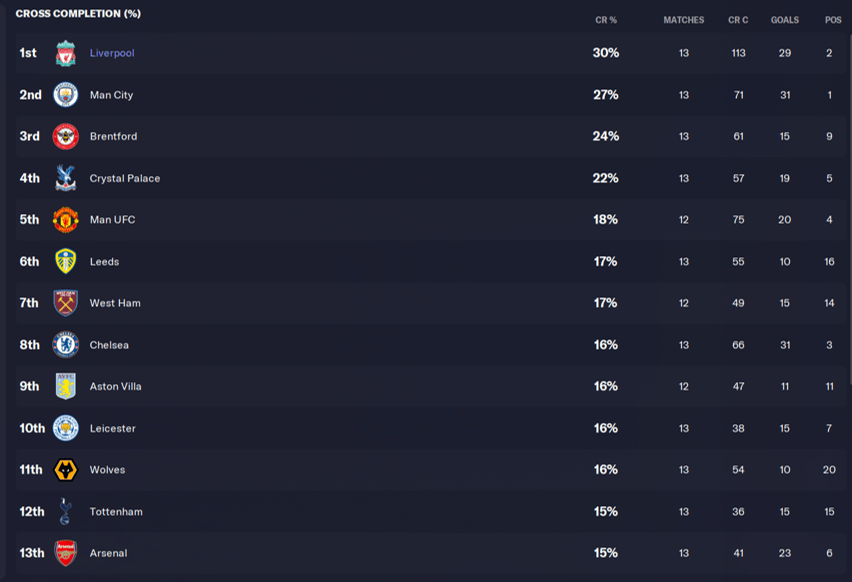 Just take a moment to appreciate that! 30.46% cross competition is insane accuracy, especially out of 113 total crosses. Our crossing is 3% more accurate than City’s and they’ve had 42 fewer crosses than we have! We’re clearly doing something right, and I think it’s time I leaned into it even more (if that’s possible). This scatter graph below provides further context into our crossing efficiency. 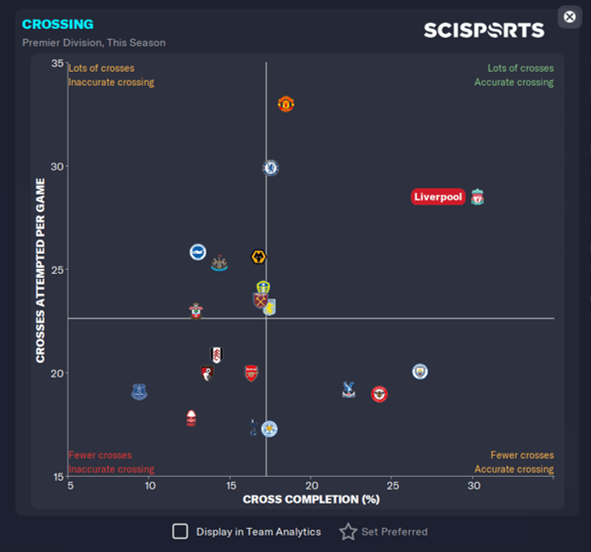 At this point, I’m trying not to feel smug. While we don’t average the most cross attempts per game (although that stat is still very high), we are currently in a league of our own in terms of efficiency. If we are to achieve anything this season, consistently delivering quality crosses is going to be vital.

I was skeptical of dropping the wide midfielders to wing-back positions at first, but we were simply too exposed at the back prior to this change. Not only has it added that defensive support, but it also gives us another dimension in build-up play – and their creativity has not been stifled as you can see below, looking at TAA’s creativity polygon first. 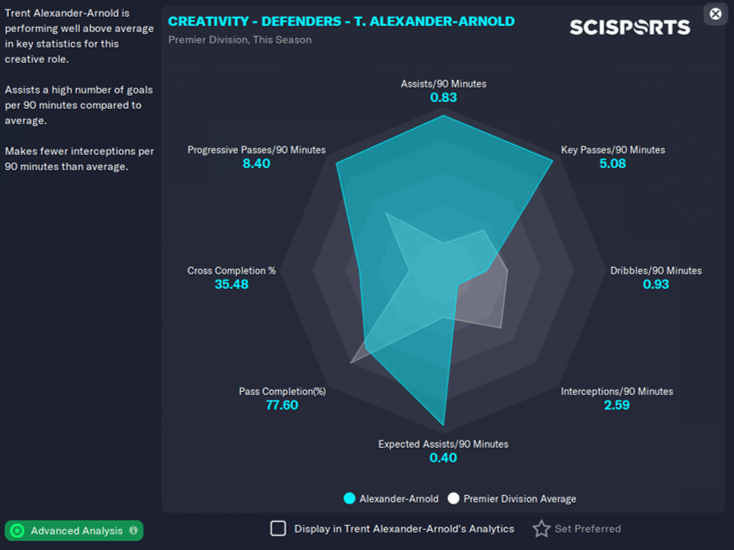 Where to start? The areas where he’s lower than average are where. The low dribble rate comes as no surprise – not only do we not dribble much as a collective, but Alexander-Arnold naturally looks to pass more as he has that special ability in that department. He excels at several areas, boasting what appears to be the league’s highest in expected assists per 90 minutes, key passes per 90 minutes, and assists per 90 minutes – as well as ranking exceptionally high for progressive passes per 90. His cross completion is very pleasing and is well above the league average, but his pass completion of 77% may be an area to look at, but alarm bells are not ringing yet. 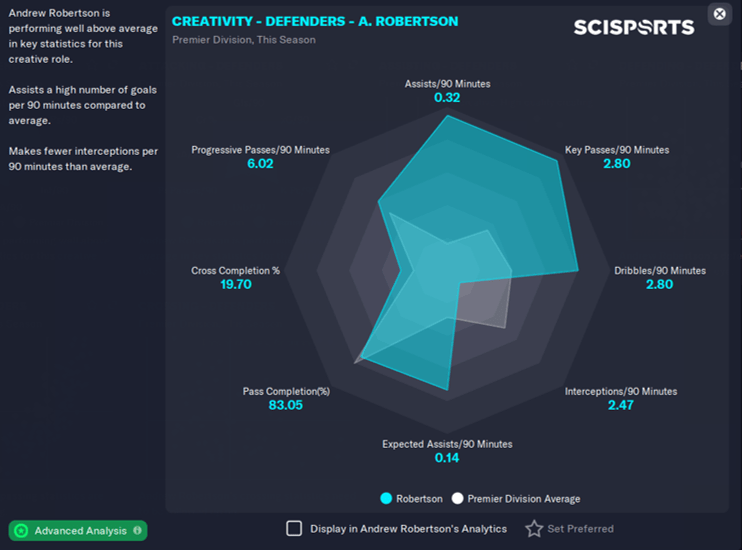 Interestingly Robbo’s game poses some differences from Trent’s. Notably, his tendency to dribble, which by far surpasses TAA’s average, and the league average for that matter. This will be down to individual traits as according to my tactical instructions, they are asked to undertake the same tasks. No complaints from me though – variation in attack is very important and Robertson’s dribbles allow us to get further down the flank in important situations.

He also does well in averages for assists and key passes, indicating that he suits his supporting wing-back role well, and more importantly that the change of dropping both flanks to that wing-back role has been successful.

Reaching back to the point I made of being successful from set-pieces, we have started fairly brightly. If you missed what I am aiming for with set pieces, you can catch up with that here. I figured that becoming more dangerous from set-pieces was attainable and gave us another dimension to our attack, and it has.

Four goals from indirect free-kicks is the highest tally in the division so far, which is pleasing, and no fluke. Scoring twice from corners so far is also decent and ranks us near the top, but I will be looking to improve on that as the season goes on. Interestingly, this is where having three CBs on the pitch instead of two comes in handy! 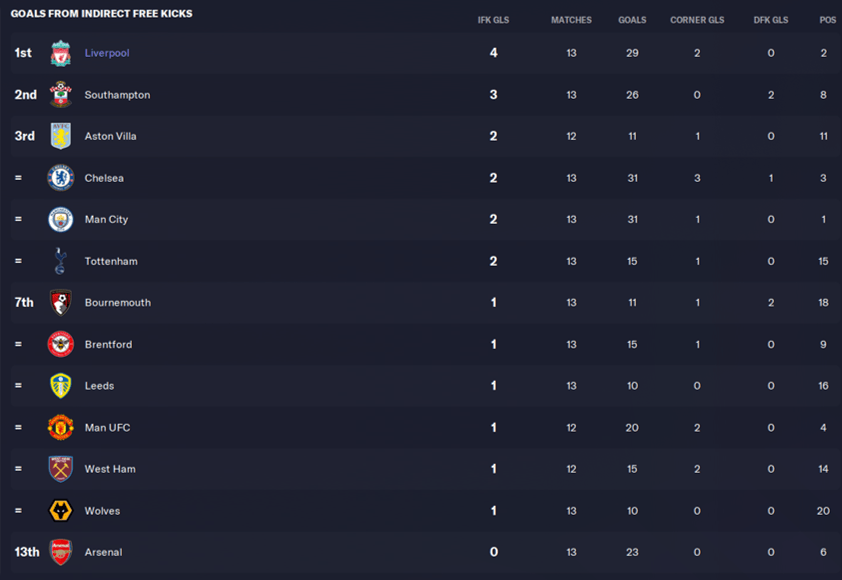 Second in the league, looking on course to qualify for the knockout stages of the UCL, and winning multiple games convincingly, all while excelling at crosses and wing play – so far, so good! My main concerns at the moment are finding a strong plan B to implement when we fall behind in big games, and also finding a strong cover for TAA at rwb. The intensity levels demanded by this system is high, and we are well-covered in every area apart from that one spot and squad rotation has been very regular already. In a previous article, I did touch upon the need for another right-back despite the presence of youngster Calvin Ramsey, but he is not quite ready for regular first-team involvement. James Milner and Jordan Henderson’s versatility has come in useful as they are both suited to playing that role if needed, but finding the right player to come in and be a direct cover to Trent is essential – ideally, I want to replicate the dynamic I have with Robertson and Tsimikas in the lwb role. As the season and the Anfield Project goes on, I will be looking to make interesting additions/transformations to this squad, both in terms of personnel and tactics.

Football Manager 2023: The art of set-pieces at Liverpool – part 1