Pre-season is a fantastic opportunity to lay down the foundations of a football club for the following season – both in the real world and in Football Manager 2023. From working on a primary tactic to identifying new signings and working towards bringing them into the club, pre-season is a busy but important period.

In FM23, I will be running a Liverpool save where we aim to dominate England and Europe in a less-than-orthodox manner, tactically speaking. This won’t be an easy task – with Haaland FC, sorry, I mean Manchester City, looking to run away with the Premier League title, we have a lot of work on our hands if we are to keep pace with them. In this article, we will take a look at how things went in pre-season while laying out some plans for the forthcoming season.

Success with a pinch of salt

Everyone knows (or so I hope) that pre-season results hold next to no relevancy – they’re just there to help players gain match fitness and experiment with new tactical ideas. However, there is an element of satisfaction that leads to hope and excitement when you go through pre-season absolutely dominating everyone you face. 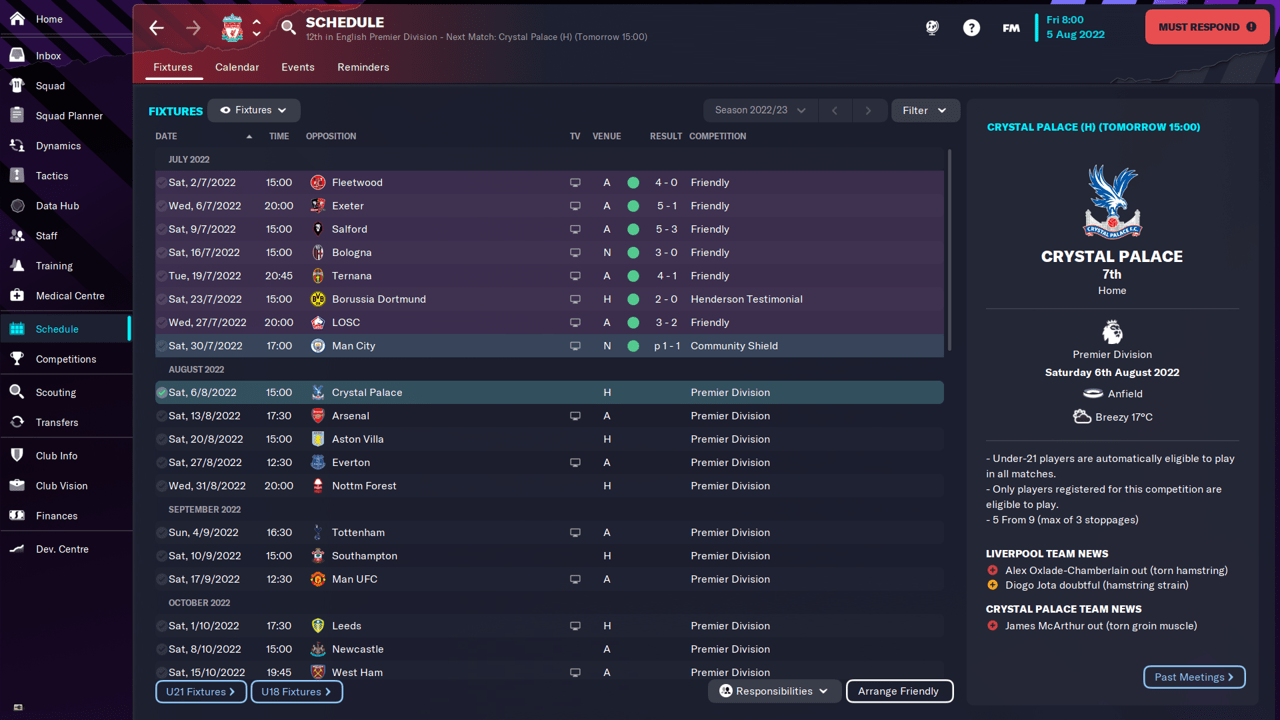 26 goals scored in seven friendlies is very promising. When you see the planned tactical set-up further into the article, you will see that we are trying to set up with a high attacking presence, but with that overall balance still present. There is potential work to be done defensively, as in some of those games we conceded more than we should be, given the level of the opponent.

Coming out on top against Manchester City in the Community Shield capped off a promising pre-season – we matched them for 90 minutes, and it became clear that some tactical depth was required, which we will dive into shortly.

Sure, I could have opted for a proven FM tactic that the community has found success with, or I could have replicated Klopp’s 4-3-3 system, but I decided to throw caution to the wind and create my own tactic from scratch. 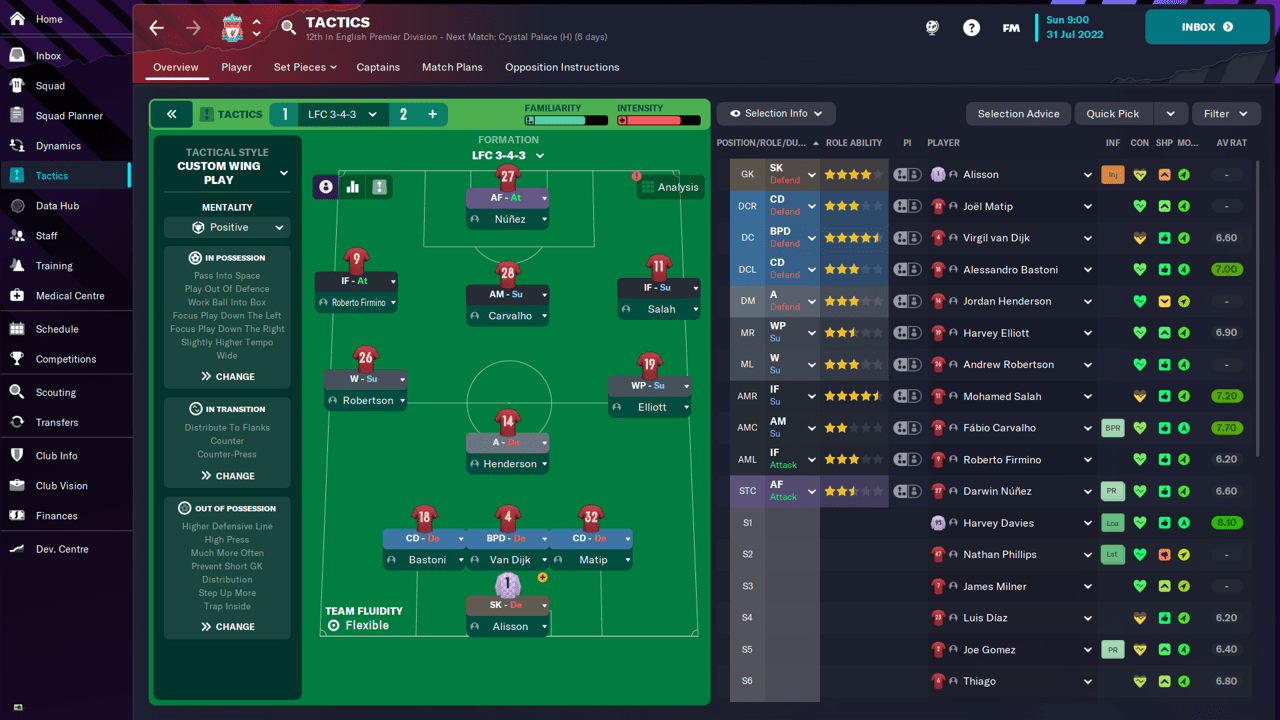 I’m not sure how I came to the conclusion that this shape is the one I’m placing my faith in, but here we are. Essentially, I was looking to create something in the realm of 3-4-3 with a slight variation that still gave the team balance.  Of course, the shot above does not represent my strongest 11, I have simply used the squad that was available at that time.

Having both the left and right wingers as inside forwards will give us that extra presence and fluidity in attack, with more wide support coming from midfield areas. Usually, Trent Alexander-Arnold would be in the right-midfield role, playing as the wide playmaker. I don’t really want him surging forward the way that Robertson will be as Trent’s creative ability is too important to bypass. Fabinho as the anchor in front of my back three will add some needed defensive protection too.

As you can see from the instructions on the left of the screen, we will look to dominate possession, playing out from the back and utilize wide areas further up the pitch, with an energetic approach off the ball.

What I did find out against City in the Community Shield is that I need to find a version of this system that suits us against teams like City – teams who would consider themselves favourites against us. 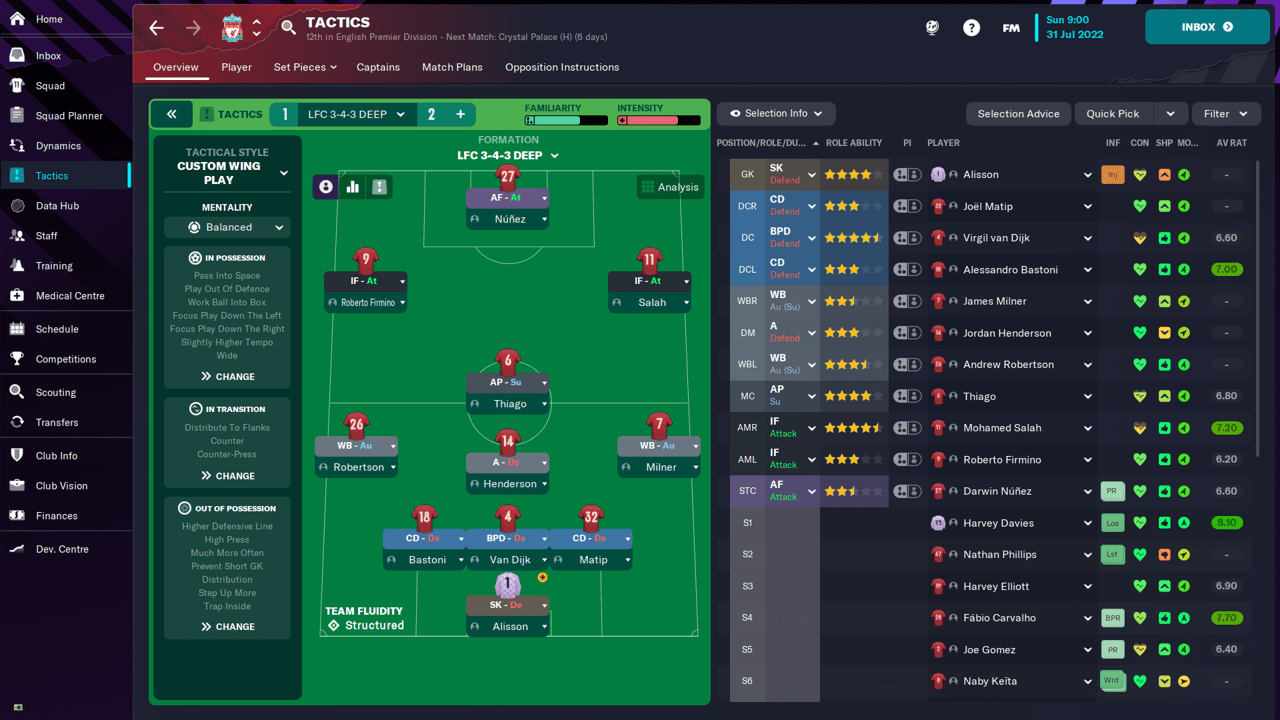 In the slightly more cautious version of that potential masterpiece of a tactic, I have moved the wide midfielders back to wing-back positions so. This gives me more defensive stability and support while also ensuring the midfield area is covered as well. Additionally, the attacking midfielder has been dropped back into a more central role, operating as the creative spark in the middle.

In terms of tactical style, instruction, and system, we are pretty much the same as the initial version. Of course, there are likely to be tweaks to both systems as the season goes on and I fall out with it when we inevitably scrape a draw at home against a struggling side, but the philosophy as a whole will remain intact.

In a recent article, I outlined some areas that I wished to improve. The need for a backup goalkeeper was high on the list, but I didn’t want to spend too much money on bringing one in. Yes, we have Caoimhin Kelleher below Alisson, but both of them being injured for the entirety of pre-season highlighted the need for a third option. In the Community Shield, I was forced to call up 18-year-old Harvey Davies from the academy to play in goal. The lad arguably won us the game, making important saves in the 90 minutes and making three saves in the penalty shootout! Still, I would prefer a third established keeper in the ranks. I sold Adrian early on as I looked to sign someone of higher quality, but his departure brought in £1.5m to the transfer budget and about £60k on wages. 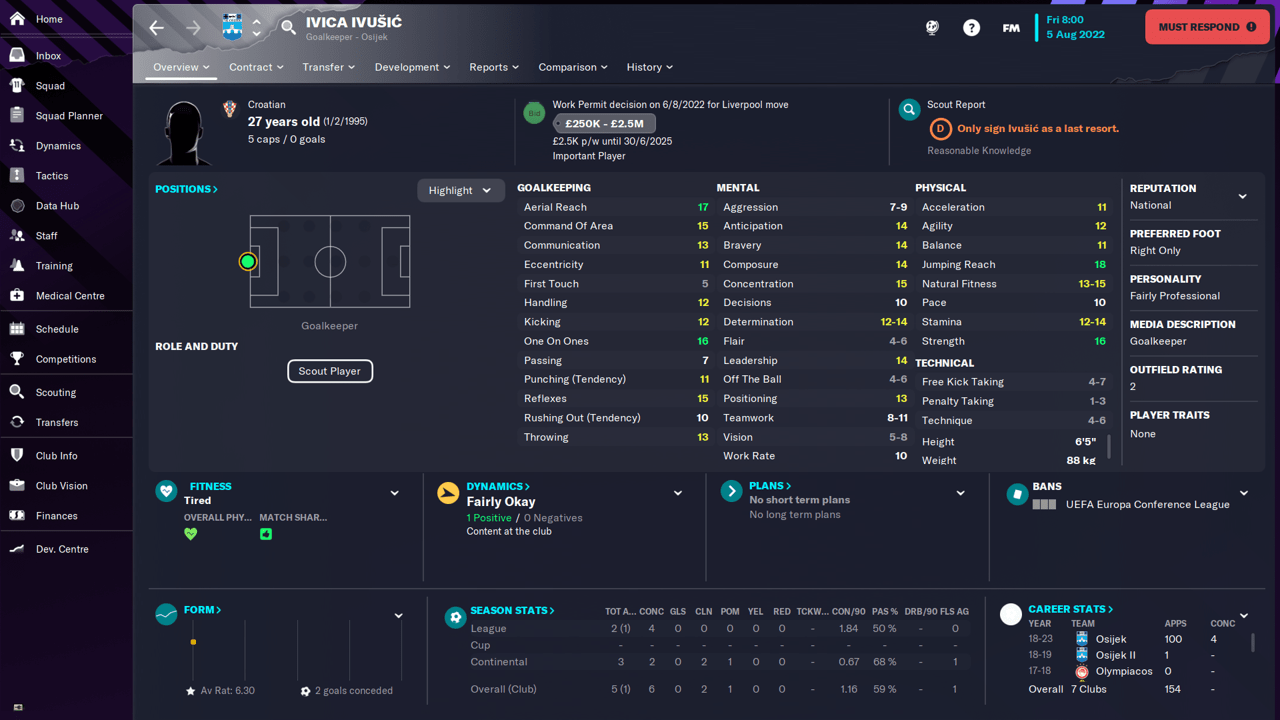 After various reports from my scouts and extensive searching, I narrowed my search down to this man, Ivica Ivušić, a Croatian international. He’s costing me £2m and has accepted a wage lower than what Adrian was earning, so this is a good move in terms of both ability and finance.

One thing that stumped me is the poor feedback from my scouts, grading him as a last resort option. Well, after cutting my shortlist of goalkeepers to pieces, I am placing my faith in this “last resort”. When compared to Kelleher, he brings some strong competition for the number 2 spot, as you can see below. 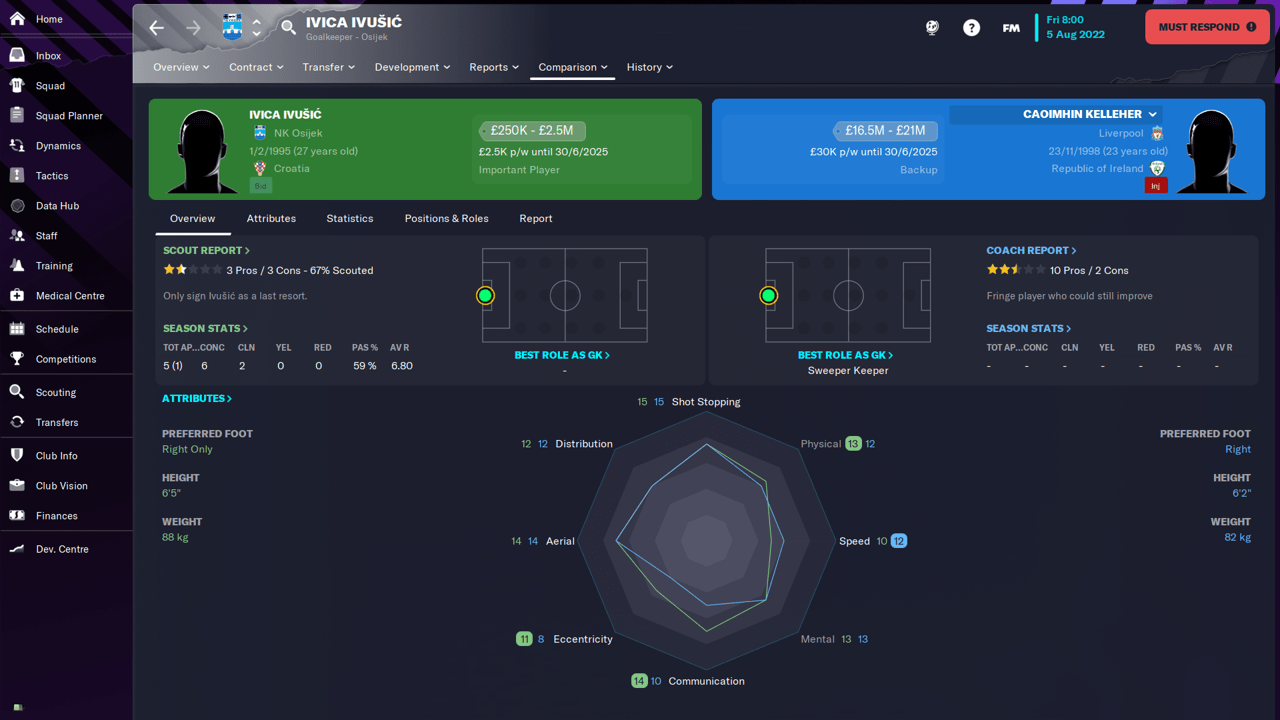 One area I outlined as an area to improve was in the department of central defense, especially if I plan on playing three at the back. Originally, it wasn’t too high on my list of priorities and would have been more of a luxury after improving other areas. But as is the game we know, things changed when I decided on my tactical style. In line with that style, I was on the hunt for a central defender who excels defensively, can play comfortably on the ball, and preferably was left-footed – playing out from the back with three at the back, I feel far more comfortable having a left-footed player on the left side of the back three. I realized this was a tough ask of the scouts – a high-level left-footed CB who can play on the ball. I feel I delivered… 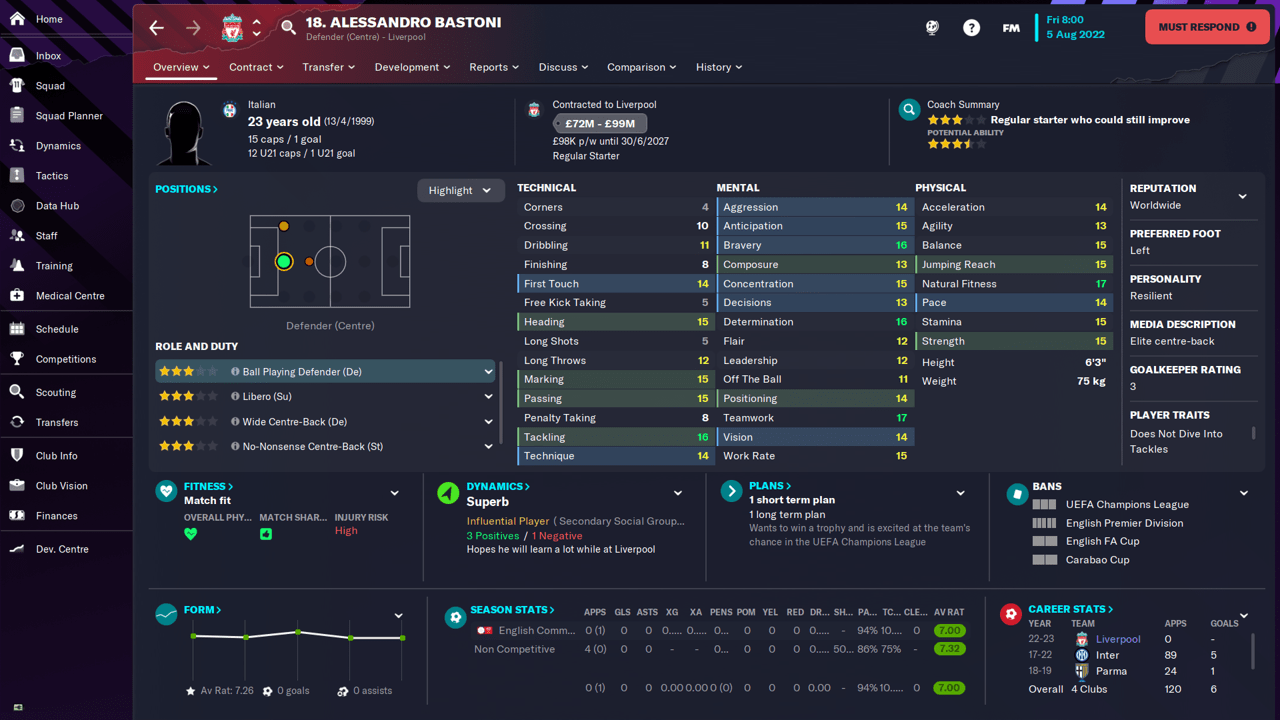 I am fairly tight when it comes to spending on FM. I often prefer to spend smaller fees on more players if needed, but since this wasn’t necessary, I had the license to spend a little more on a marquee signing. At £50m including clauses and installments, this could be something of a steal in the long run.

At 23, he will develop into an even better player in the coming years and already possesses strong ability in the areas I touched upon before. Bringing him in also makes things a little less risky if an offer comes in for Joe Gomez as he is not in my plans currently.

I did initially plan on making some changes in midfield, with both Naby Keita and Alex Oxlade-Chamberlain being on my list of players to sell, but there has been a slight change in plan. We will keep Ox – I do like him as a player, keeping him fit will be a task in itself but he also contributes to the quota of meeting the league’s rules for homegrown players. At the time of writing, there is interest in Keita so I just need to work some magic in getting a club to take the leap and place a bid.

The only other additions I had made in my inaugural transfer window as the gaffer are two youngsters who have significant potential, but I have loaned them straight back to their respective clubs for this season. The first one will be a familiar name to many in the FM community, particularly those who like their wonderkids. 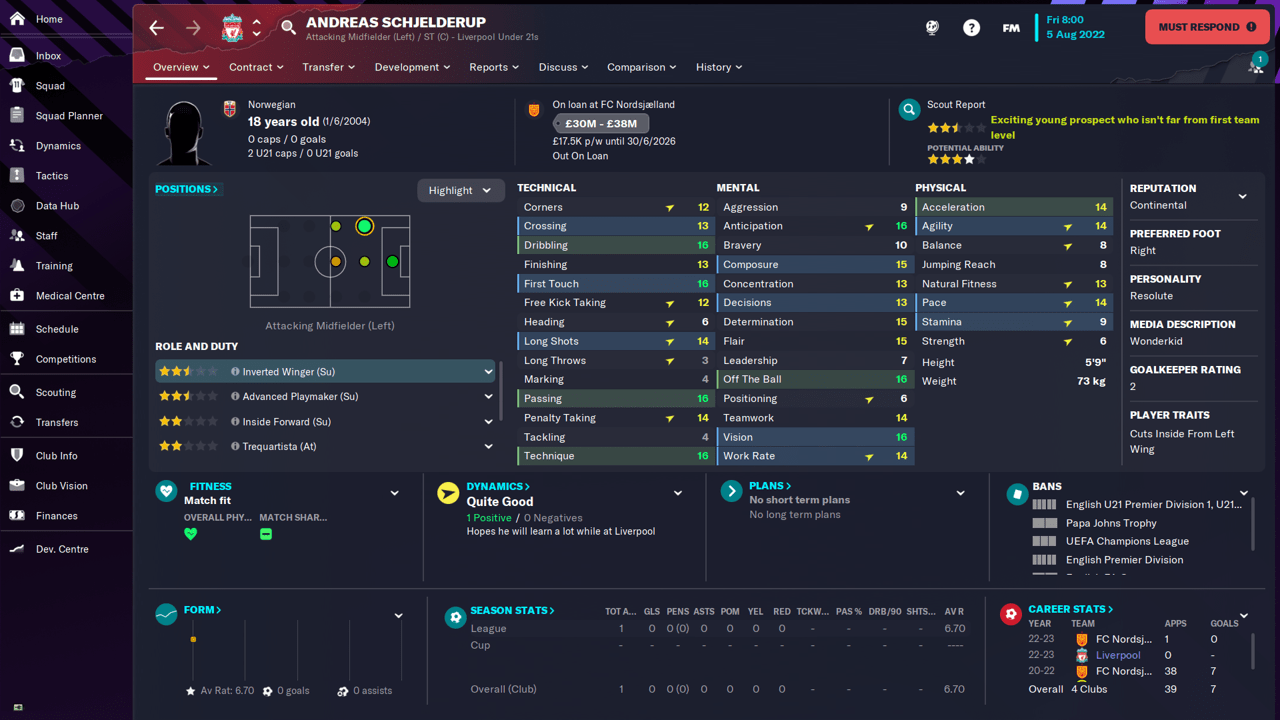 I first noticed Andreas Schjelderup in FM22 when I was playing as Blackburn Rovers. I signed him in my first season in the Premier League back then, and he was a regular feature in the team, playing well beyond his years.

At 18, he already has some very impressive stats in the creative department. He cost £8.5m, but as usual, we didn’t pay all of that upfront. I will monitor progress with FC Nordsjælland before making a judgment call on his role next season, but ideally, I would like him in and around the first team by then. 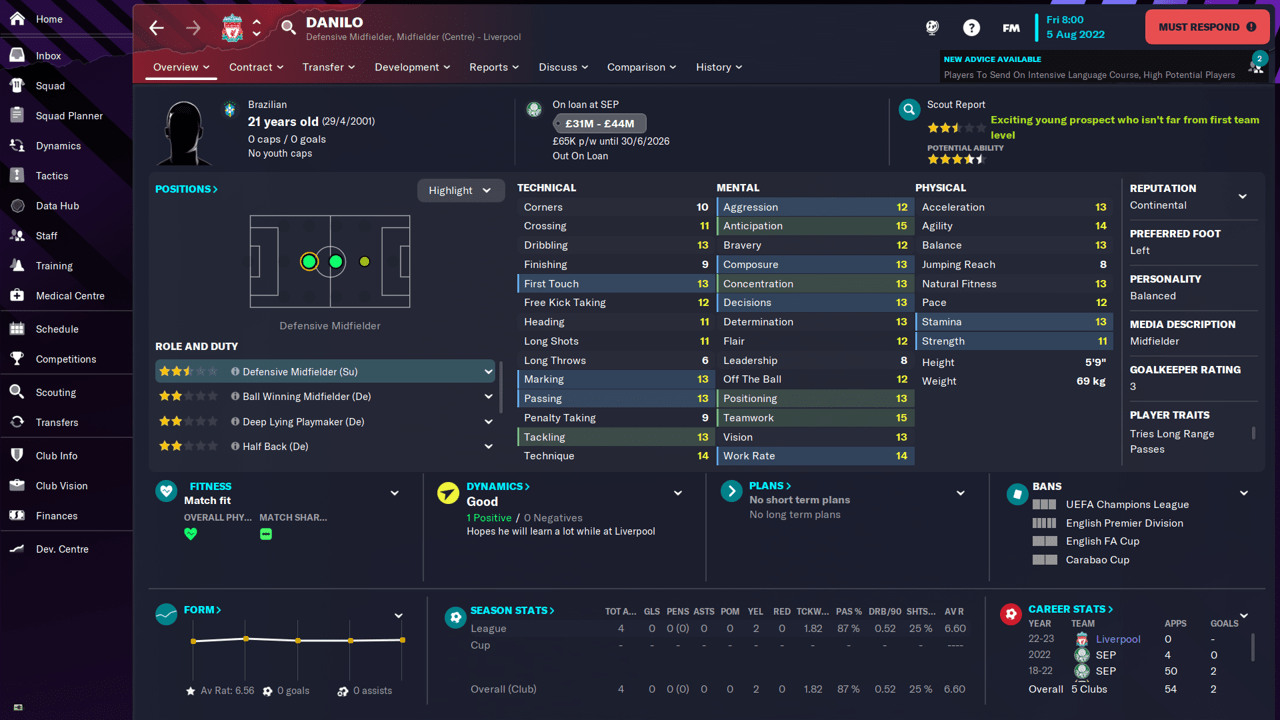 The final signing to discuss cost me £15m in total, and for me to pay that fee and not even have the player with me for another season just shows the faith I put in both the player and also my scouts, who told me to sign him whatever the price. Danilo is a versatile midfielder who is at the stage in his career when first-team football is vital for his development, hence the immediate loan back to Palmeiras.

With Jordan Henderson getting towards the end of his time at Anfield, cover for Fabinho is of slim pickings, which is where Danilo comes in. The idea is, after that, that he is Fabinho’s direct replacement when his game starts to fall off.

As far as a pre-season on FM goes, I am fairly happy with that one. I would have liked to have shipped Keita out by now, but I am more than happy to have him around the squad if a move doesn’t materialize, his fitness and proneness to injury is just too much of a stumbling block. On the pitch, we have shown a good deal or promise, especially in attack, and we look to be finding our feet defensively. We will have to closely monitor the progress of the deeper version of my three-at-the-back tactic, but it doesn’t differ a great deal so it should be a seamless transition. I have a few more concepts up my sleeve in the realm of tactics, individual development, and game management but we will cover them as the season goes on!

Football Manager 2023: The art of set-pieces at Liverpool – part 1