While Liverpool’s League Cup semi-final first-leg against Arsenal has been postponed due to Covid, plenty is happening off the pitch this week. January is shaping up to be a crucial month for Jurgen Klopp’s side, as they prepare to play without three vital players. As the Reds manage FA Cup, League Cup, and Premier League duties this month, Mohamed Salah, Sadio Mane, and Naby Keita are all gone at the African Cup of Nations.

FC Porto’s breakout sensation, Luis Diaz, could reportedly be on the verge of a mid-season move to Liverpool for a deal worth £60 million. There have been rumors that Liverpool are expected to try and reach an agreement with FC Porto over a deal worth around £60 million to become the club’s first signing of the ongoing transfer window.

Diaz has established himself as one of the most highly sought-after attacking talents in Europe over the past 12 months. He moved to FC Porto back in 2019, joining the club for a low-money fee. Although the winger was involved in just 11 league goals in each of his first two seasons in Portugal, he put up impressive performances in Copa America, scoring four goals. Diaz’s contributions in the attack helped Colombia finish third, while the player himself ended as the tournament’s joint top-scorer. His performances in Copa America were the head-start Diaz was looking for heading into the new season. The attacker has scored 12 goals in 15 league appearances so far. He has made a solid impression in the UEFA Champions League as well, where he scored a goal each in the home and away games against AC Milan. 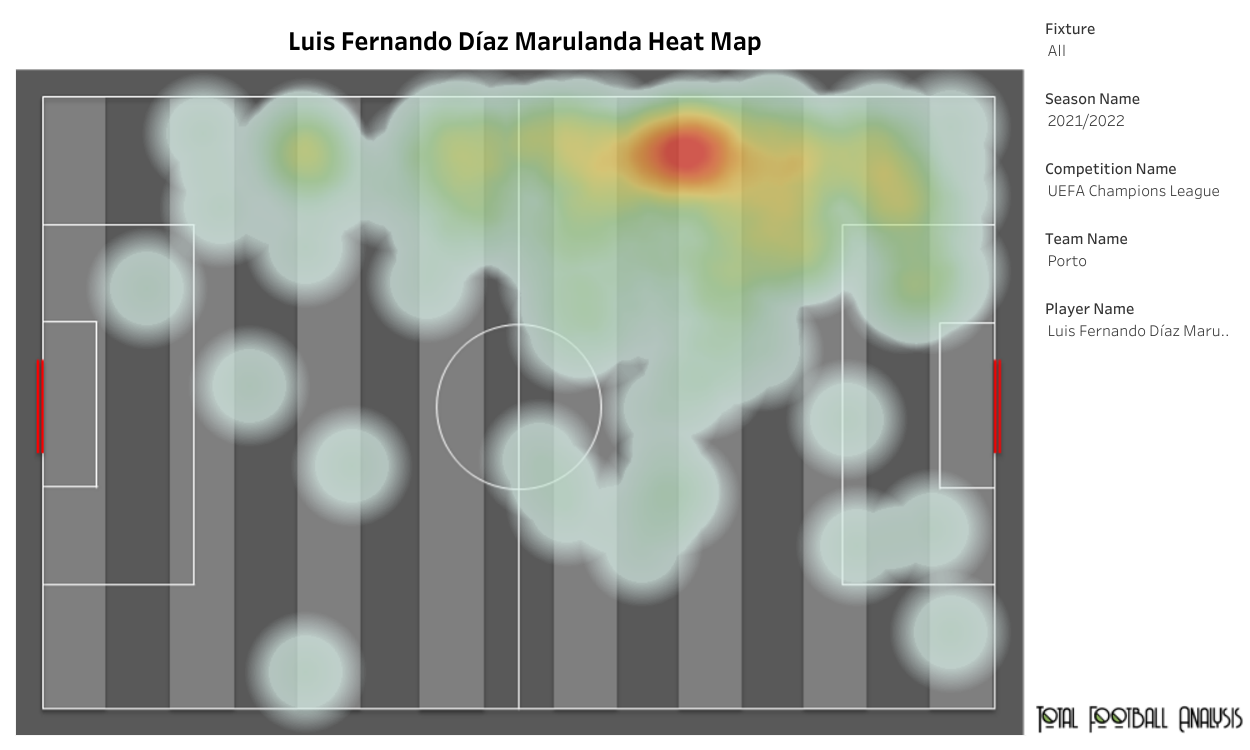 Diaz has been operating on the left flank for the Portuguese giants and has been highly effective from this flank. He has a high work rate and gets into great positions to receive the ball, even if he has to track back into deeper positions on the field. Diaz is an excellent example of an inverted winger who plays on the side of their weaker foot to increase their attacking possibilities. When on the left, he prefers to stay wide and maintain his width, with the darker shades of the heatmap close to the touchline on the left-hand side rather than drifting infield. Diaz can cut inside onto his preferred right foot while playing on the left, but it also allows overlapping full-backs to get by him. 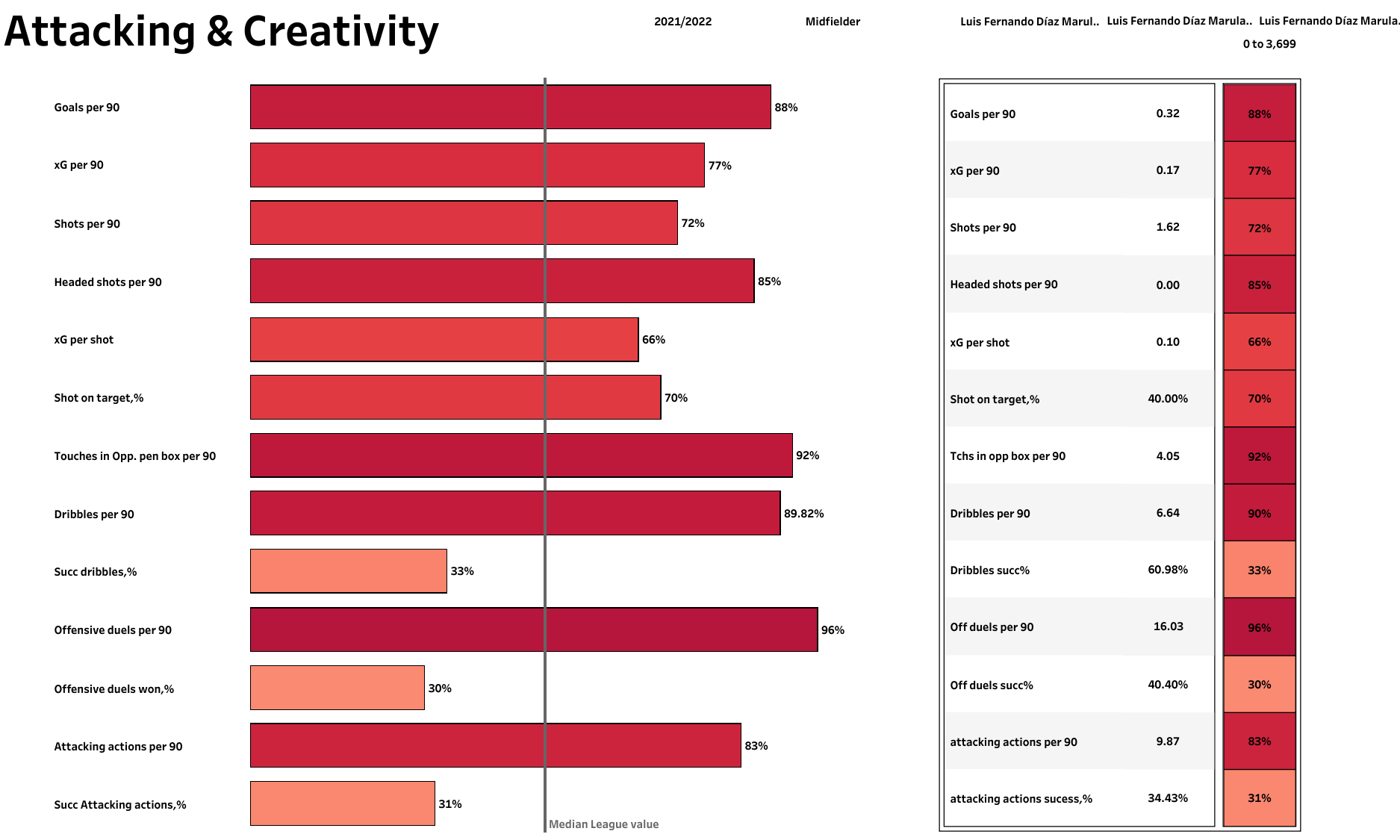 The above visual shows us the attacking and creativity stats for Diaz from his Champions League season so far with FC Porto. The metrics indicate that most of his stats are significantly higher than the median league value. Diaz has 4.05 touches in the opposition’s penalty area as he gets into threatening positions to receive the ball. He has attempted 16.03 offensive duels per 90 minutes and has been able to win 40.4% of these duels. 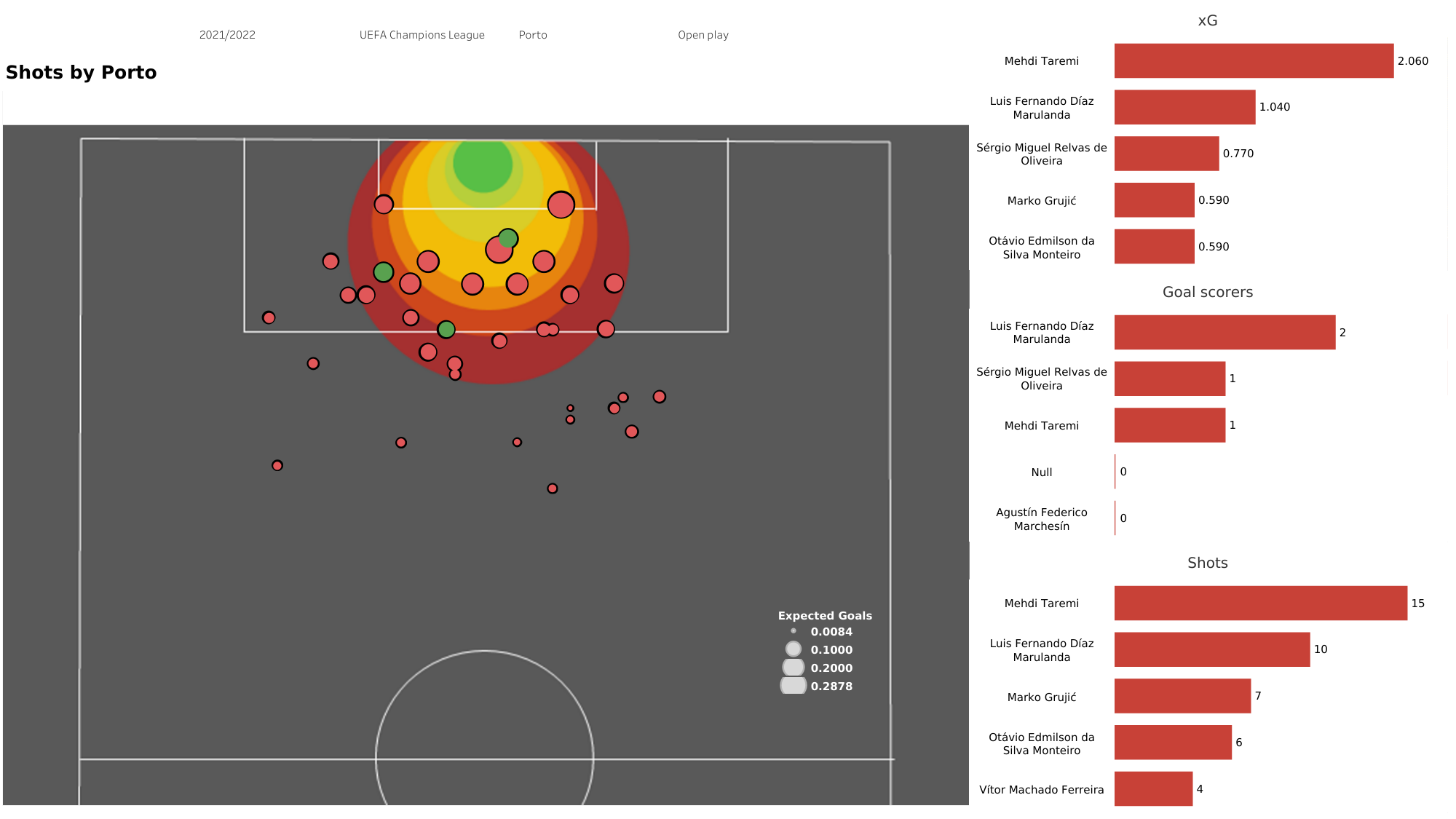 The above visual shows the shots attempted by Porto in the Champions League. Diaz has attempted 10 shots on goal. He has generated an xG of 1.040 in six games and was their top scorer in the group stage with two goals. Out of the 10 shots he attempted on goal, five were on target, and he hit the post with one of his attempts. This indicates that Diaz is highly clinical when he gets into threatening positions in and around the penalty box. 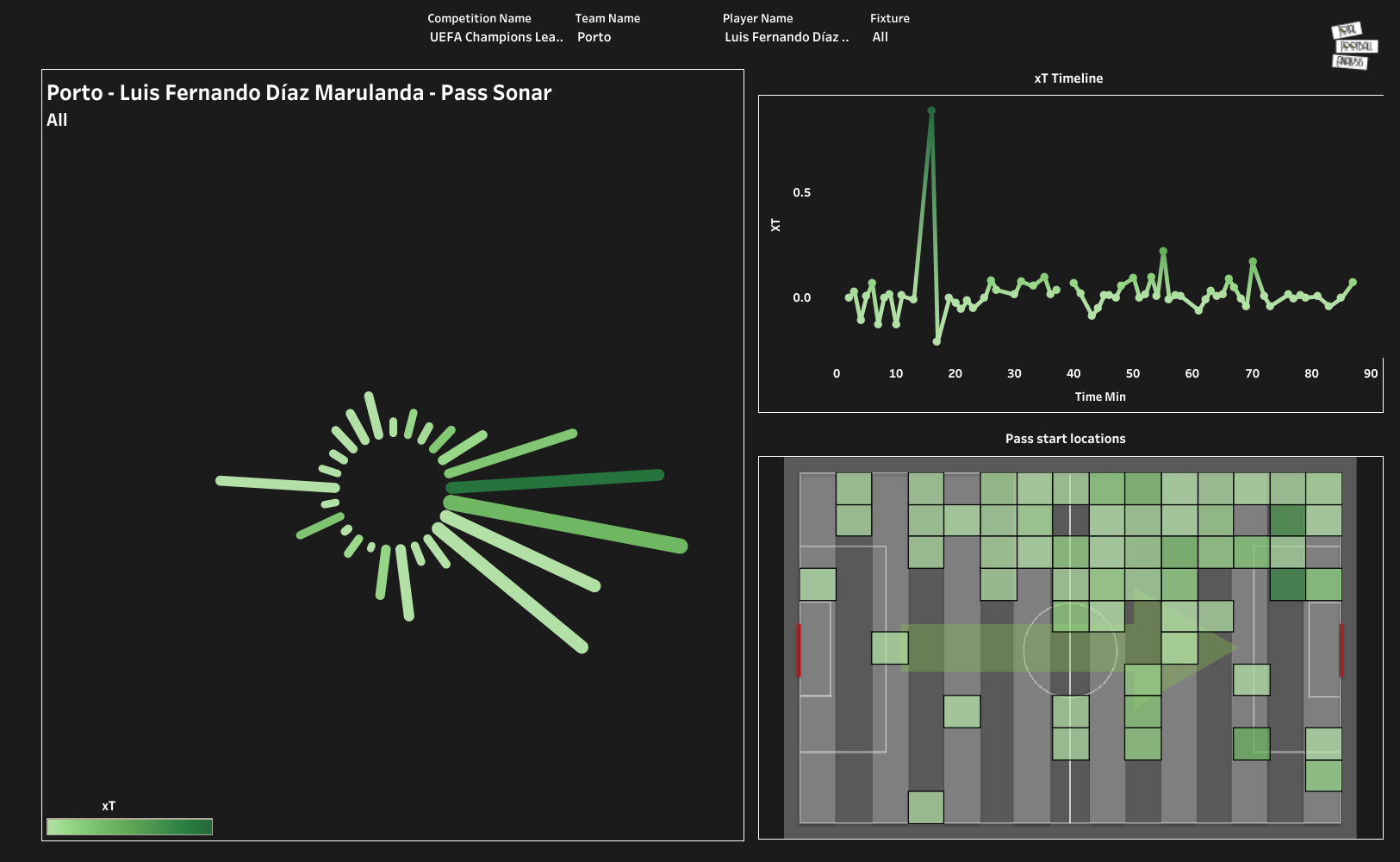 The above visual shows us the pass sonar for Diaz. It also indicates the pass start locations and the xT these passes have generated. From the visual, we can see that as Diaz plays on the left flank, most of his passes are towards his right, and these passes have generated a high xT. The pass start locations indicate that he loves playing in wider areas and can put great crosses into the penalty area. Diaz has excellent dribbling abilities, has great control of the ball, and can take it away from defenders in an instant to get into threatening positions to either cross the ball into the penalty area or take a goal attempt.

Klopp is hoping to fill the sizeable gap in his Liverpool frontline by signing Luis Diaz. With Sadio Mane and Mo Salah away at the Africa Cup of Nations, the 24-year-old is seen as just the right kind of player to help Diogo Jota and Roberto Firmino in attack as Liverpool try to keep the pressure on Manchester City through January in the Premier League.