Nat Phillips has been with Liverpool since 2016. He was a part of the youth squad, and then graduated to the first team in 2018 after which, he was loaned out to Stuttgart, where he made a total of 22 appearances. Phillips was expected to be loaned out once again, but he impressed Klopp enough to claim a place in the Premier League squad.

Liverpool defender, Nat Phillips, has been recently linked with a move to other clubs in the Premier League as well as other clubs in Europe. His agent has come out and spoken about the rumors. Nat Phillips was a massive part of the 2020-21 season, helping Liverpool secure Champions League football amidst a centre-back crisis.

However, the performances he put him earned him some well-deserved respect, and he proved that he is more than capable of being a starting Premier League centre-back. He has also played and trained alongside Virgil van Dijk daily, and this alone has given him the perfect experience for a potential life away from Anfield. Unfortunately, Phillips is yet to earn a move to a new club, despite Jurgen Klopp being very open that he would allow a move if an acceptable offer came in. Recently, the 24-year-old was linked with Serie A side Napoli as well as Premier League side West Ham United.

The 24-year-old had the same chance in the summer, though there weren’t any takers at the Reds’ asking price. Phillips signed a new contract as a result but hasn’t had many opportunities at all this season. He currently sits as Liverpool’s fifth choice at centre-back, behind Virgil van Dijk, Joel Matip, Ibrahima Konate and Joe Gomez. It means Phillips has only had a few minutes of game time this season. 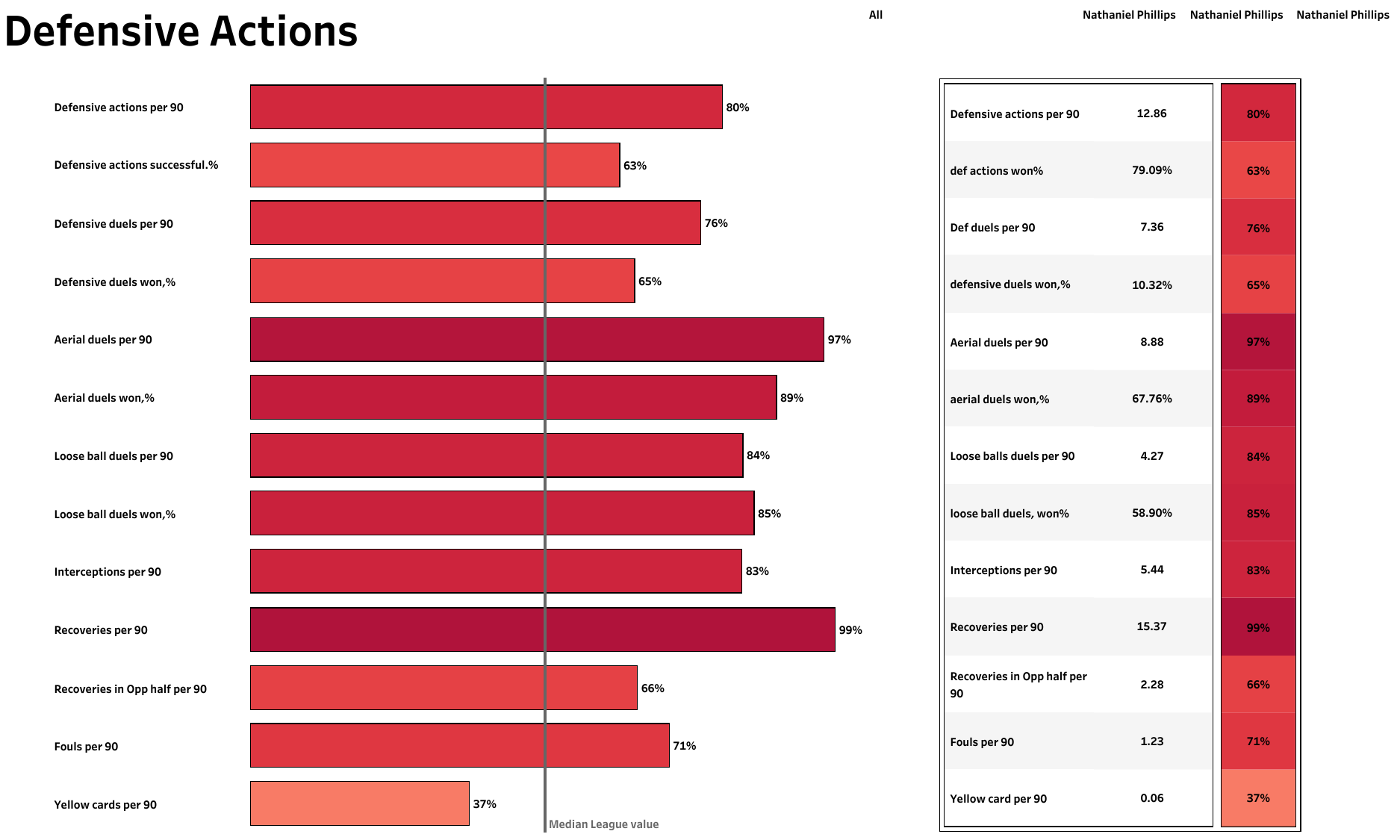 The above visuals show us the defensive metrics for Phillips from the 2020-21 season, where he got a chance at regular football due to the injuries to Klopp’s first-choice centre-backs. He attempted an average of 12.86 defensive actions per 90 and won approximately 80% of these actions. He has a high success rate in winning aerial and loose ball duels. He helps recover possession of the ball and also possesses good distribution skills. Throughout the second half of the season, Phillips displayed a calm and composed performance which earned him interest from other clubs. 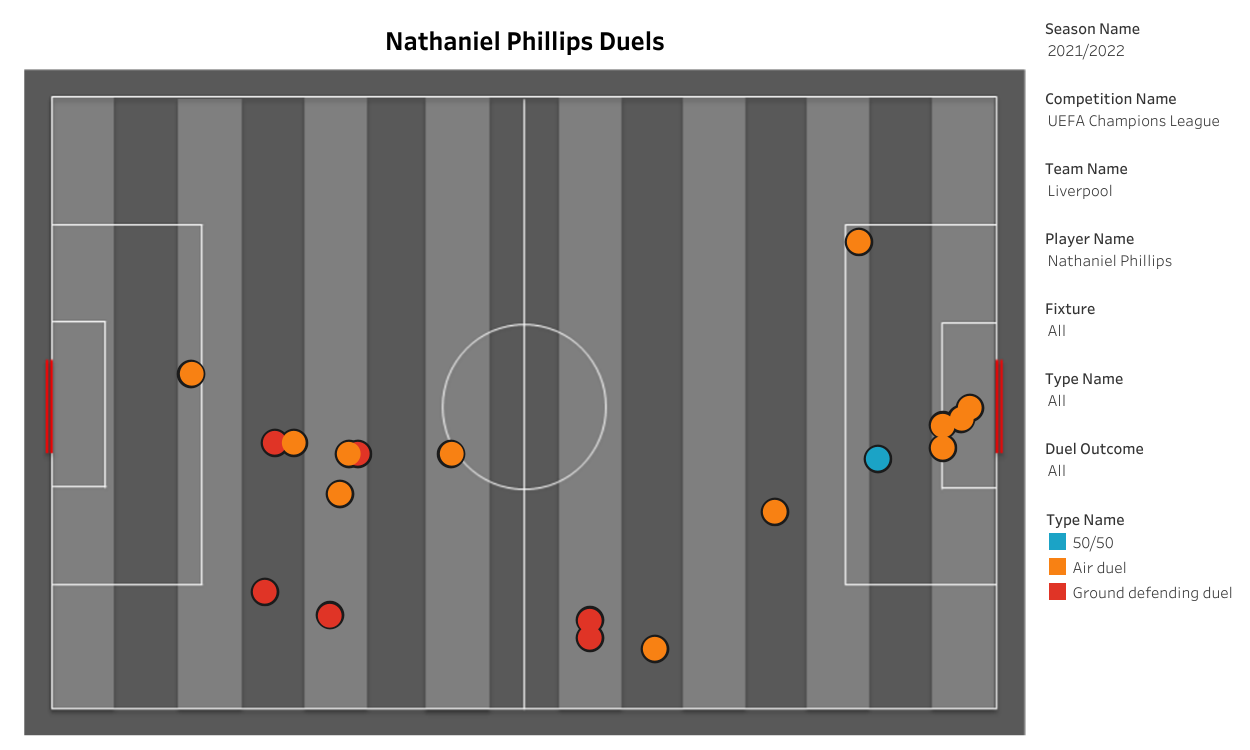 Phillips started against AC Milan at San Siro, playing very well up against Zlatan Ibrahimovic. Liverpool ran out 2-1 winners on the night, and the centre-backs were a huge part of that. He won most of the duels he attempted, and had a high win rate with the aerial duels he attempted. It can also be seen that Phillips is a threat in the opposition’s penalty box as he has attempted a few aerial duels there. These performances have given Nat Phillips a chance to prove his worth to clubs that will be interested in signing him. With the Reds still open to a sale, he could choose to finally embark on a new path in 2022. 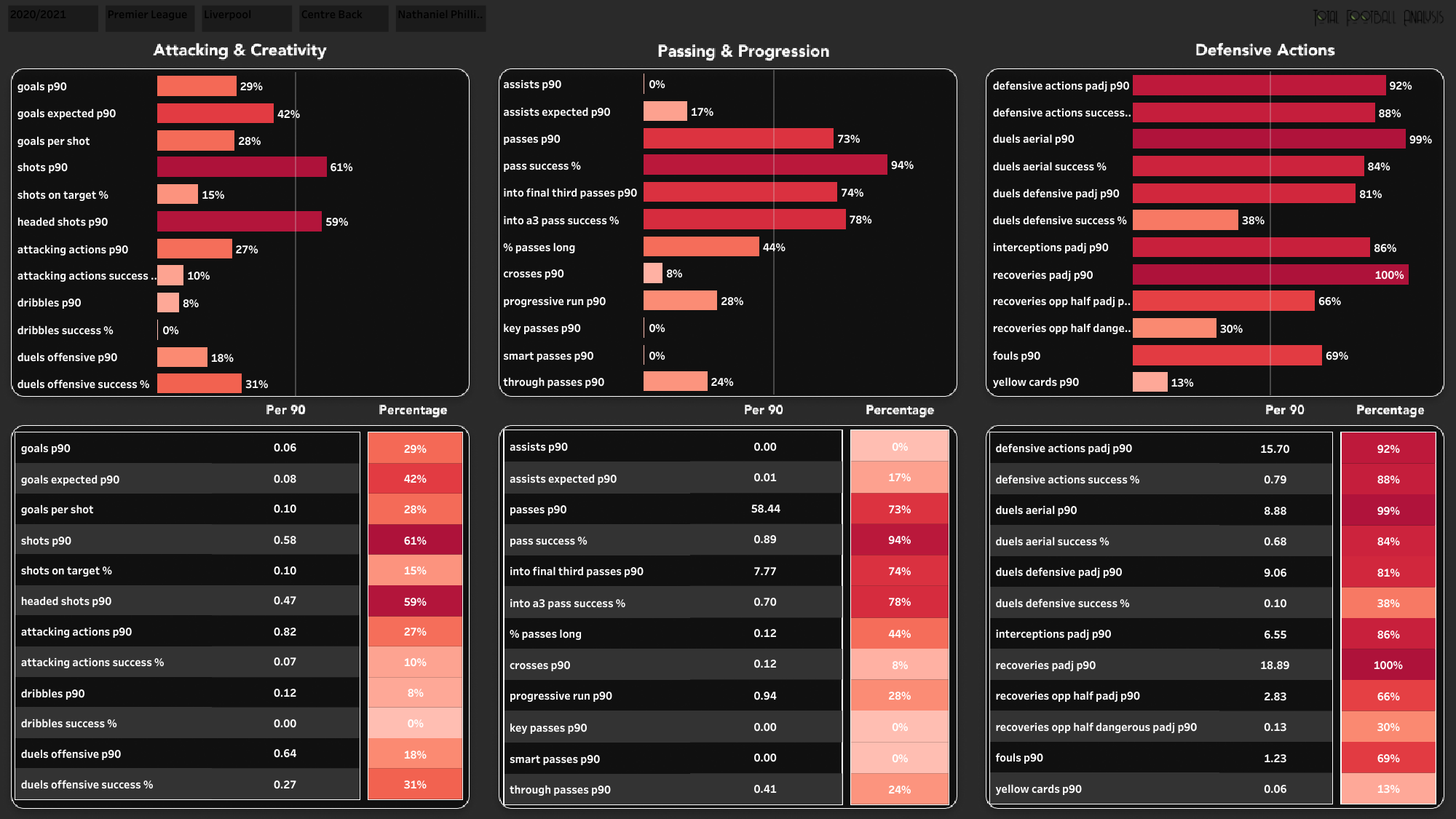 West Ham, who are missing Angelo Ogbonna and Kurt Zouma, have been heavily linked with the defender ahead of the upcoming transfer window. Phillips has had the exposure and experience in the Premier League and the Champions League, which has made him a reliable centre-back who can start for a club that needs him. The Hammers are expected to strengthen their backline over the winter after first-choice pairing Angelo Ogbonna and Kurt Zouma were ruled out for significant spells through injury. David Moyes has been left with just Issa Diop and Craig Dawson as his only available options at the heart of defense in recent weeks. The above stats indicate that he has impressed with his defensive actions and also has a high pass success rate.

Nat Phillips is a player who helped his team push for a third-place finish last season, considering the number of injuries they had last season. Now he’s proving himself against the top side in Serie A. Phillips is absolutely good enough to play a role for a Premier League side, and there is no doubt about that.