This summer, Liverpool have rebuilt their attacking department, as in came Darwin Nunez from Portuguese giants Benfica and out went Sadio Mane to Bayern Munich. While Mohamed Salah signed a contract extension that will keep him at the club until 2025, the Reds have been trying to offload Roberto Firmino as his contract expires in 12 months’ time. Should the Brazilian be sold, Liverpool will need a backup for Nunez at centre-forward. One possible name could be Luis Suárez, who is now a free agent and can be offered a contract anytime. 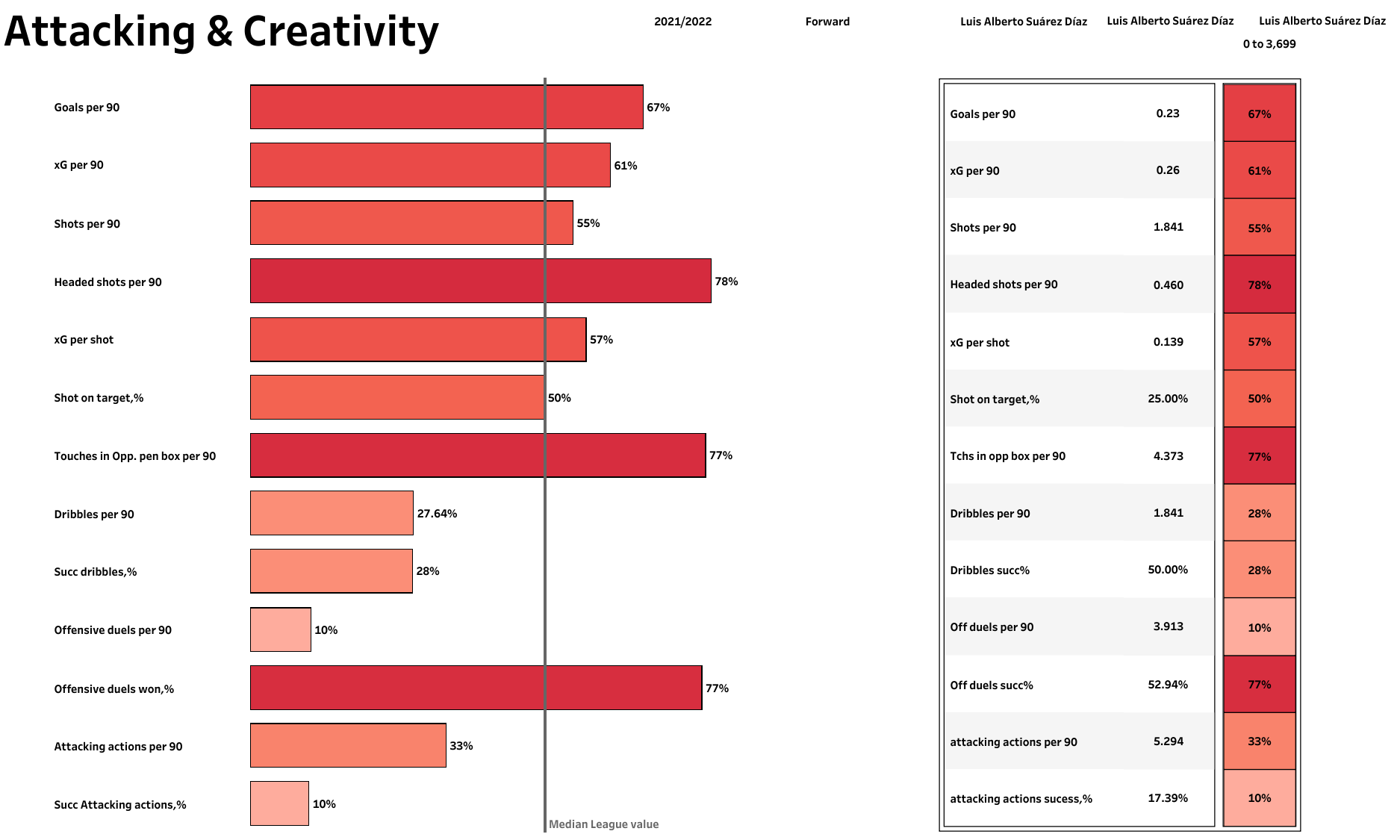 Suárez played 45 games in all competitions for Atletico Madrid last season. This included seven in the UEFA Champions League where he was on the pitch for 348 minutes. He scored one goal for the team, and it was only slightly less than the xG. He took only 1.84 shots per 90 and could test the opposition goalkeepers on just 25% of the occasions. The Uruguayan registered 4.37 touches of the ball in the opposition’s penalty area per 90, putting him in the upper quartile among forwards. Likewise, his 0.46 headed shots per 90 were also good enough to be in the upper quartile. 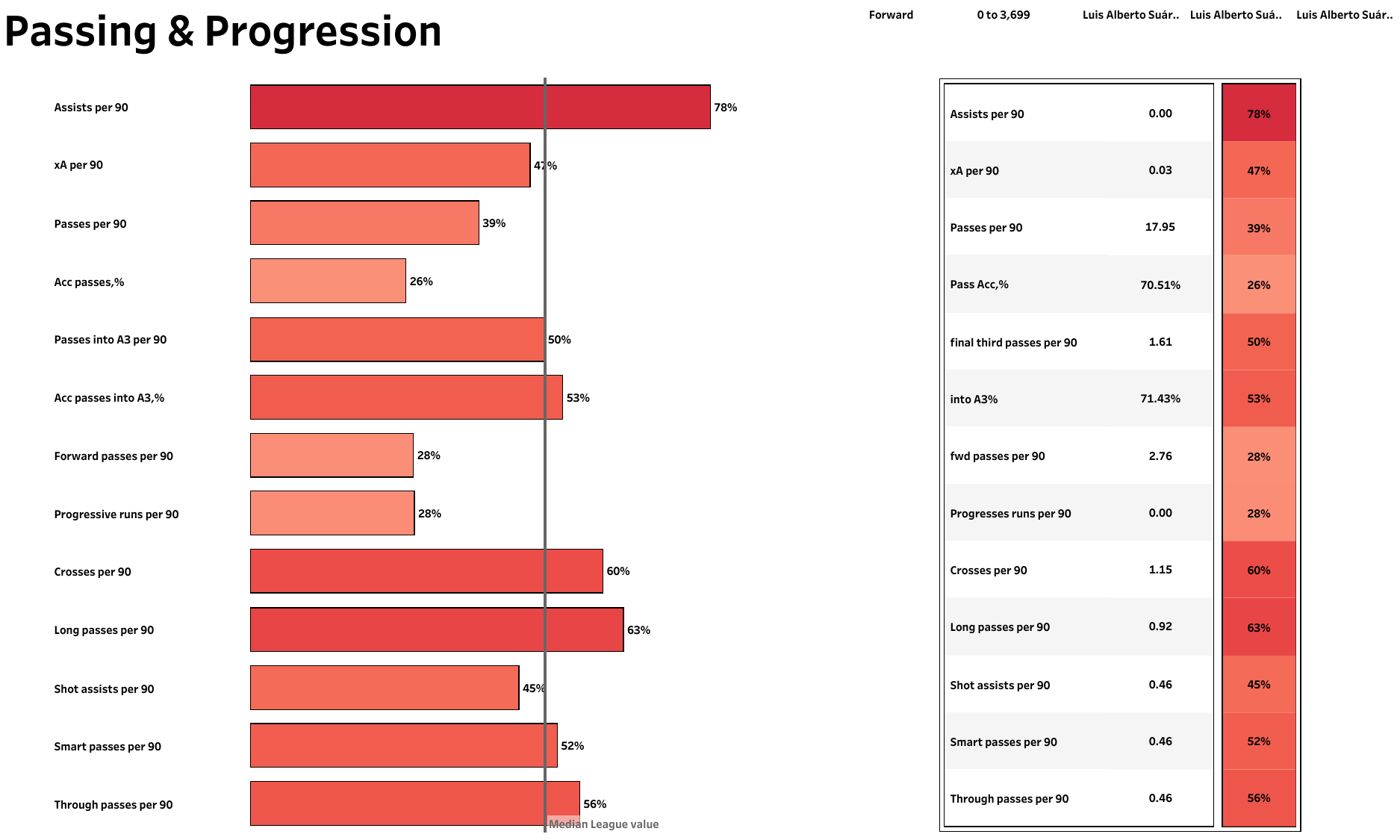 Suárez was more of a passenger in the build-up play than an active participant as he completed only 12.6 passes per 90 out of 18 attempts. He failed to make a progressive run throughout the competition. He completed 1.15 crosses per 90 and 0.92 long balls per 90, placing him above average in both categories. He also completed the same number of shot assists per 90, smart passes per 90 and through balls per 90, with 0.46 each. He generated only 0.03 xA per 90. 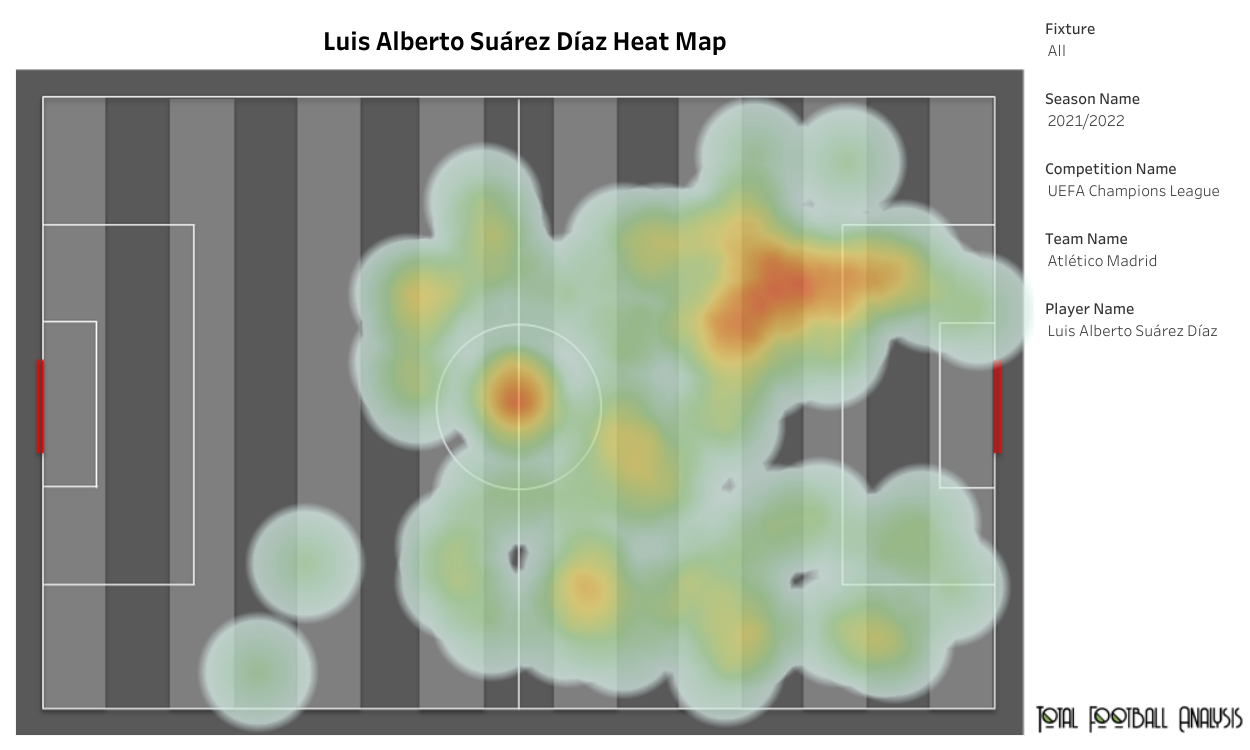 Suárez was most active in the area just outside the penalty area. He was often positioned as a left-sided striker in a 4-4-2 formation used by Diego Simeone. He completed two progressive passes, three key passes and balls into the final third each, six progressive carries and three carries into the penalty area. He also received 32 progressive passes (or 8.42 per 90). On the defensive end, he attempted 21 pressures (of which six were successful), five tackles & interceptions and two clearances.

Luis Suárez helped Atletico Madrid to a famous LaLiga title in 2020-21, but age caught up with him and he played only a sporadic role in the UEFA Champions League last season. Domestically, he fared much better, scoring a respectable 11 goals in 35 LaLiga matches. However, Liverpool are unlikely to approach their former club legend, and as per reports, the veteran is more likely to return to his first professional club, Nacional, in Uruguay.

Transfer Talk: Why Jude Bellingham could be perfect for Liverpool’s midfield, but only from 2023

Under the microscope: Liverpool wanting to sell Rhys Williams this summer