Liverpool may have missed out on their second Premier League title in three years, but the Merseyside outfit have moved quickly in the transfer market to secure the services of attacking midfielder Fábio Carvalho from Fulham. The 19-year-old has enjoyed a breakthrough campaign in the EFL Championship this season for the Cottagers, who stormed their way to the title with 106 goals scored. Carvalho will join Jurgen Klopp’s side from 1st July 2022. In this piece, we will review Carvalho’s season at Fulham and explore how he could bolster the midfield of Liverpool. 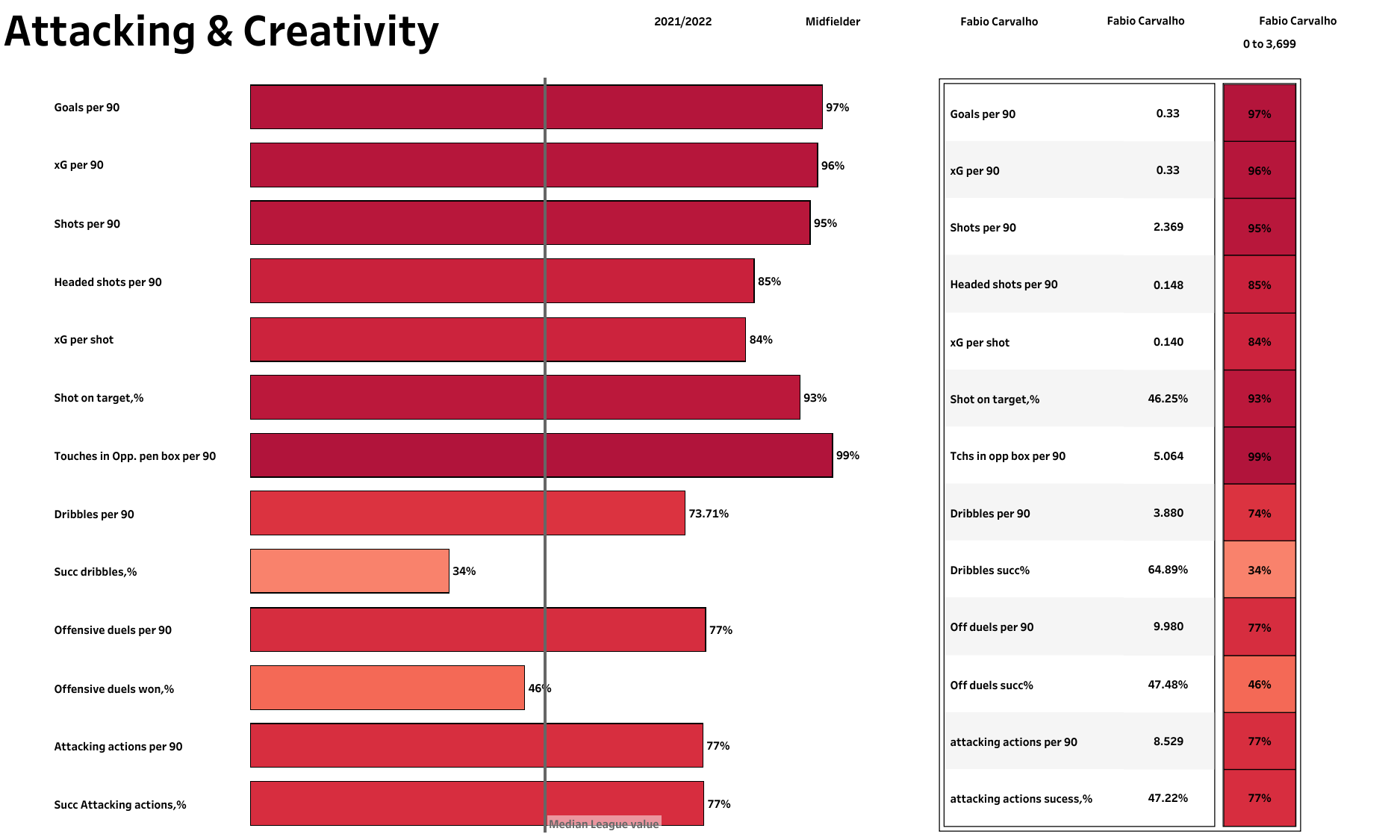 Carvalho scored 11 goals for Fulham on their way to the EFL Championship title, and as a result, automatic promotion to the Premier League. He ranked second in the squad for goals scored, only behind Aleksandar Mitrovic who had, quite frankly, a ridiculous season, netting a record 43 goals in the English second division. Carvalho has scored at a rate of 0.33 goals per 90, which is exactly the same as xG per 90 estimated. The 19-year-old has also attempted 2.37 shots per 90, with 46.25% of these being on target. With 5.06 touches per 90 in the opposition’s penalty area, Carvalho ranks in the top 1%. The Portugal-born forward is also attempting 3.88 dribbles per 90 at a decent success rate of nearly 65%. 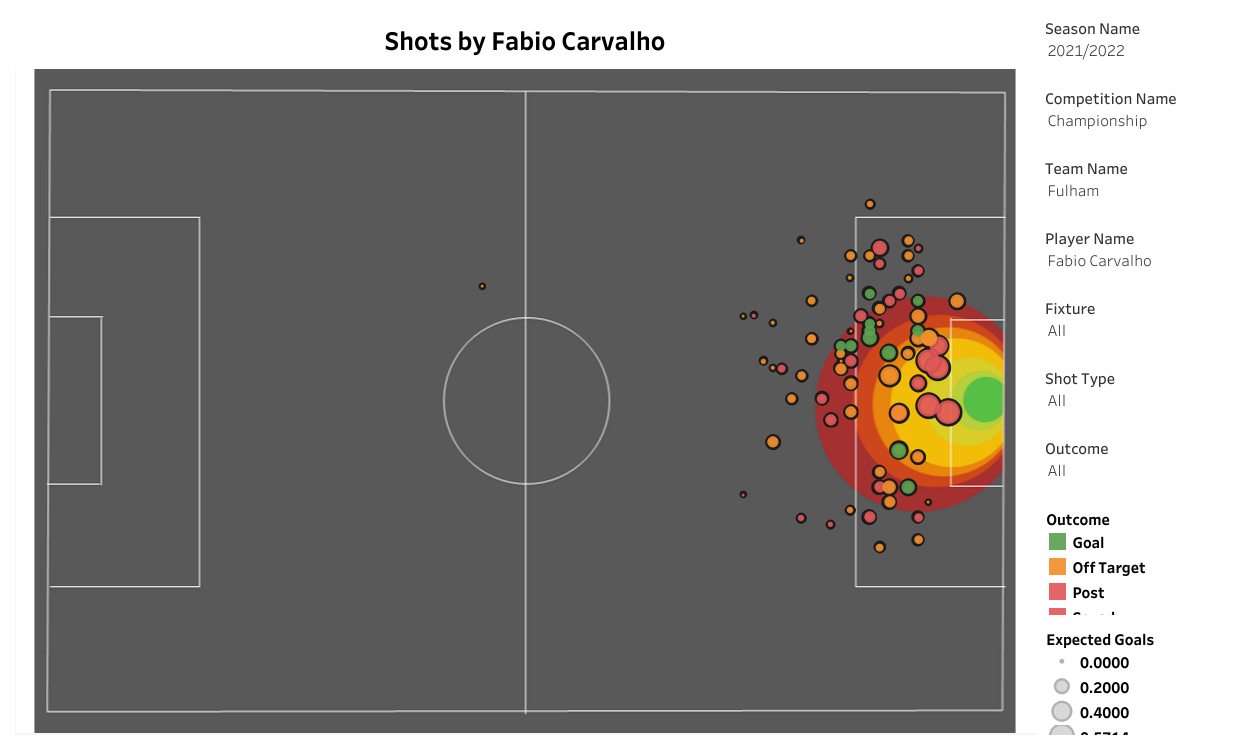 Seen in the above visual is the shot map of Carvalho for Fulham in the EFL Championship this season. All but two of his goals have come from inside the opposition’s penalty area. None of his goals have come from the penalty spot. The 19-year-old has fired off 78 shots this season, of which 37 were on target. While Carvalho has hit the target more often than not, some of his shots from the close range have been saved by the opposition keepers. So, he is at least forcing keepers to be alert. His conversion rate stands at 7.09 shots per goal scored, which could improve under Jurgen Klopp. 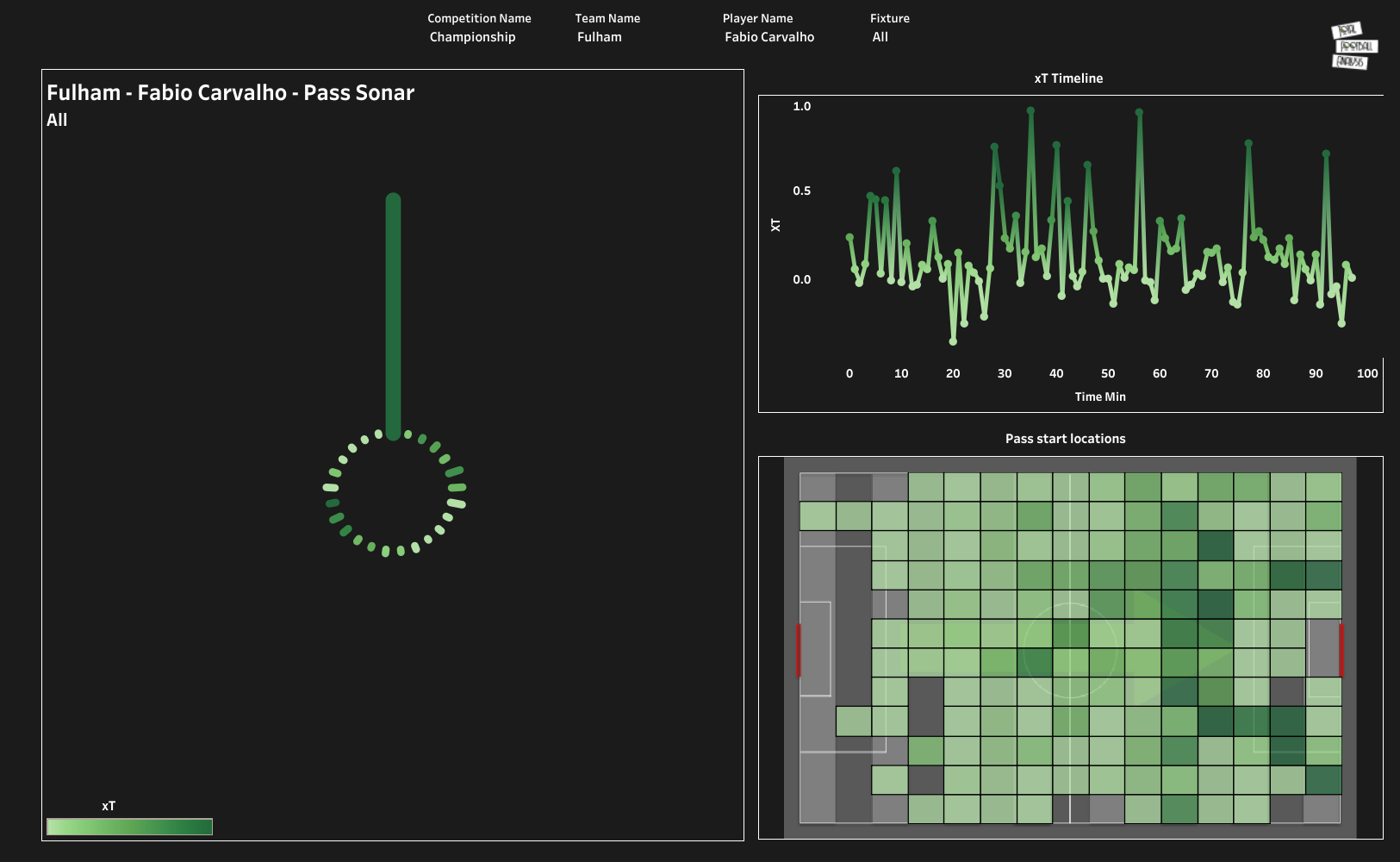 Displayed above is the xT timeline and map of Carvalho for Fulham this season in the EFL Championship. As an attacking midfielder, unsurprisingly, he has been most influential in the final third. Carvalho registered seven assists this season. Combine this with 11 goals, and he has been involved in a goal every 157 minutes. The 19-year-old is a great ball progressor as he completed 85.57% of his passes into the final third.

With James Milner being 36 years old, and Alex Oxlade Chamberlain’s contract expiring in 2023, it was the perfect time to strengthen Liverpool’s midfield depth through the signing of Fabio Carvalho. He could be the creative presence for Jurgen Klopp’s men in midfield.