And there we have it, our first season of the Liverpool save in Football Manager 2023 has concluded. To recap, I set out to achieve success using my own 3-4-3 system, with a focus on wing play and attacking set pieces – I wanted to come away from the commonly used and extremely popular 4-2-3-1 gegenpress. To get a full idea of the 3-4-3 tactic, you can read about it here if you missed it before.

How do you assess a season? Trophies, obviously. But looking deeper than that, using this season as a tool to improve for next season, I also want to look at these key areas: tactical elements with a view to league stats and the data hub, and the performance of young players and whether or not they could feature more next season. You may also remember that I embarked on a journey to transform Trent Alexander-Arnold into a creative midfielder (which you can read about here) – I will assess his midfield performance before discussing his potential role for next season. Finally, I will give a brief overview of which players I may look to sell as well as looking at areas to strengthen.

Any FM player knows the feeling of uncertainty and nervousness when it comes to seeing how their very own tactic will perform, and it was no different with this 3-4-3. Now, I have already covered the system in some depth – you can catch up with that here if you want to jog your memory about the tactical details. Ultimately, there isn’t much I can fault with this system – as you’ll see later on in this article, it brought success in a very decent season, offering a good balance between defence and attack. After a couple of alterations earlier on in the season, we closed out the second half of the campaign looking like this: 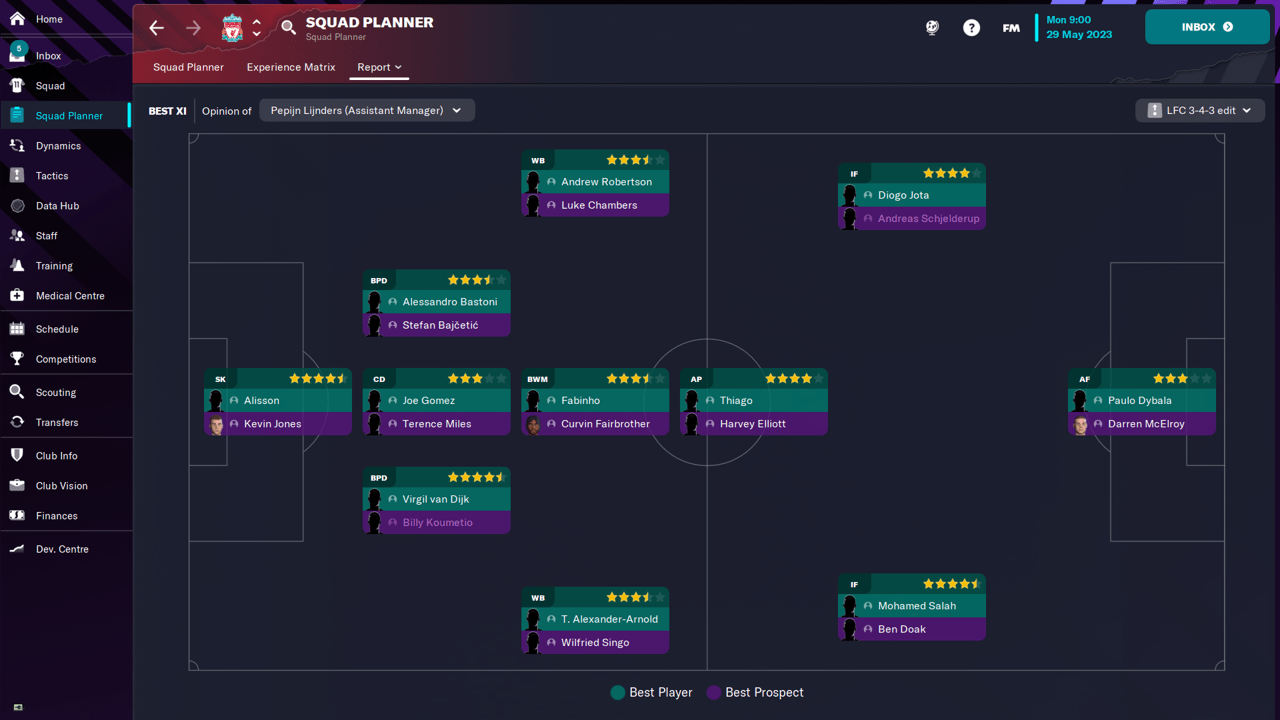 Main points as to why I think this shape provided a brilliant run of results? A good balance was provided by the three centre-backs – two of them playing as ball-playing defenders which allowed the wing-backs to essentially play in midfield when we had the ball, but be on hand in defensive situations. Thiago in the CM position played as a deep-lying playmaker (on support) which added some presence slightly higher up, which provided assistance to the front three. Additionally, the element of squad depth was vastly important as this tactic is high in intensity, meaning fatigue was often an issue – thankfully, we were able to rotate smoothly.

The only progression that I care to implement in the near future is a solid plan B. Obviously, every team has an off-day from time to time, but there were some games where we struggled to get hold of the ball and create chances. So creating a secondary formation that rectifies that is a necessity over pre-season.

In terms of going forward into next season, I want to keep things fresh by using a different primary tactic (keep your eye on our socials for details on how you can be part of this!). So, while the incredible 3-4-3 will remain on standby as an emergency formation to switch to in certain games, I am retiring it in this Liverpool save.

At the beginning of the campaign, the board made it clear that they want us to challenge for the league title, while the fans expected us to go and win it. At the end of the day, we were only able to meet the board’s expectations in this matter, but we put up one hell of a fight. P.s we won the Community Shield prior to the league season, so, one trophy in the bag! 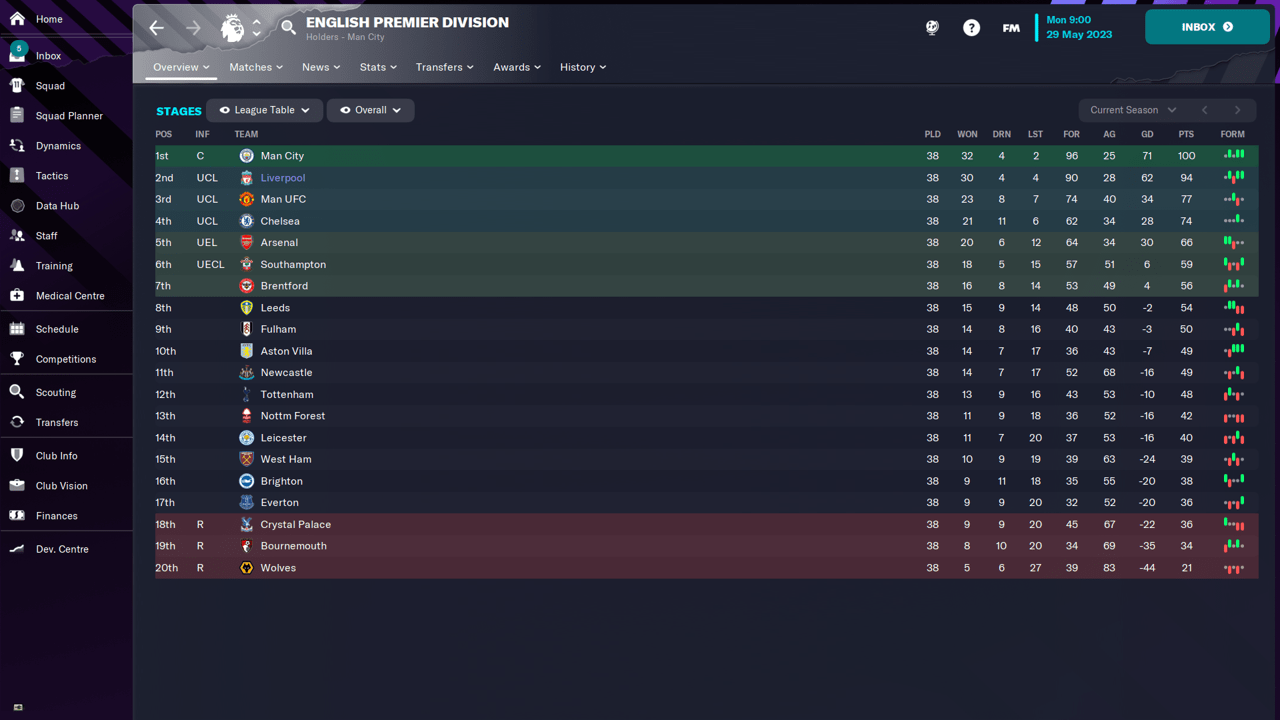 Finishing with 94 points and still only finishing second speaks volumes of how brilliant Manchester City were in this campaign – Haaland scoring 48 league goals *might* have something to do with that! But we are here to asses our season, not City’s. On face value, this is a strong 38 games – 30 wins, 90 goals scored and just 28 conceded – 9 times out of 10, that return would bring you the title, so I am pleased with our showing. 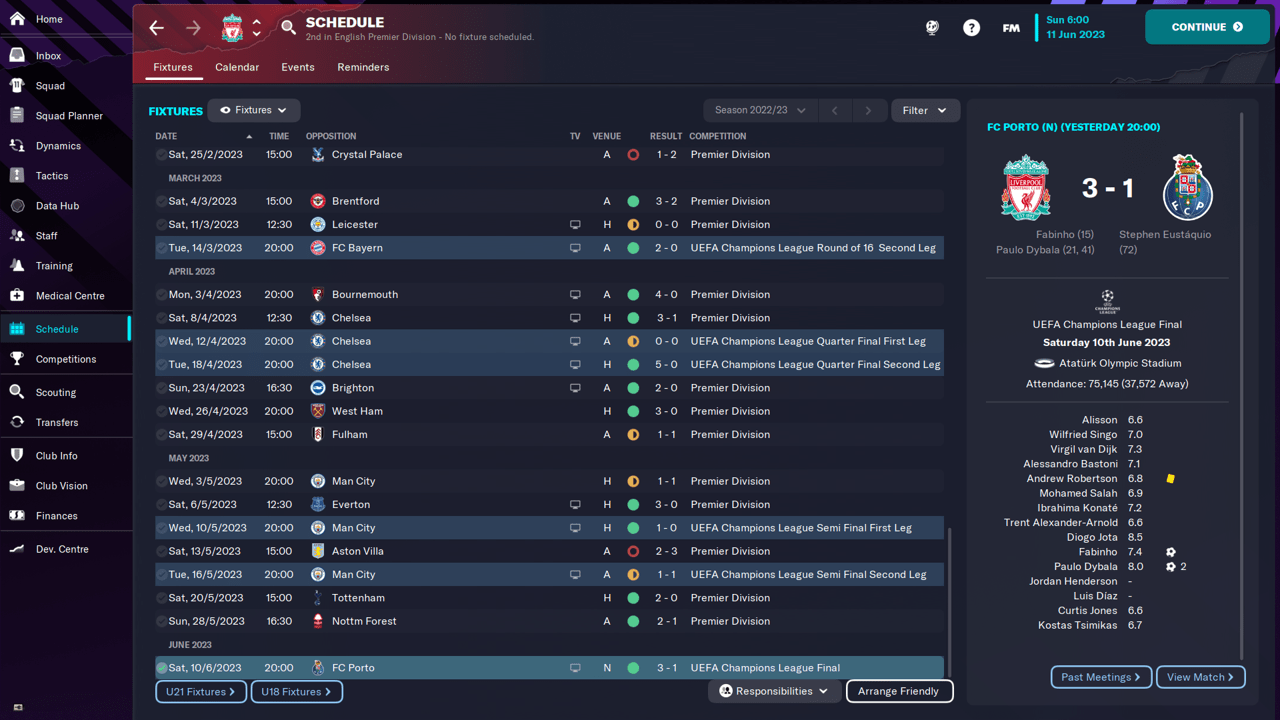 The image of our season run-in sheds some light as to why we finished second. To be fair, we were chasing City from the start, always 3-5 points behind. However, drawing at Fulham seemed to be where the dream started to fade away. They are a team we should be beating – as are Aston Villa who beat us 3-2. Getting six points from those two would have put us on level points with City. But we can play the game of “ifs and buts” all day long until we reach the hypothetical scenario where we win all 38 league games.

As you can see from the bottom of those fixtures, we did the incredible and went on to win the Champions League – quite a huge relief after missing out on the league. Not only did this keep the board, fans, and squad happy, but it also showed that we can handle ourselves against other elite clubs. Early in the season, I was concerned that we would be too open off the ball against these types of clubs, but going unbeaten over two legs against Munich, Chelsea, and Manchester City shows that we can beat anybody.

The data side of things

FM23 is a goldmine for those who like their data in football. Whether you’re using the in-depth league and player stats or the impressive data hub, there is so much at your disposal to influence how you run your team. With that being said, I think it is important to use said data in the appropriate areas and not become obsessed. As I said earlier, wing play and set pieces were two main areas of attack, and as we can see below, we dominated in these areas. 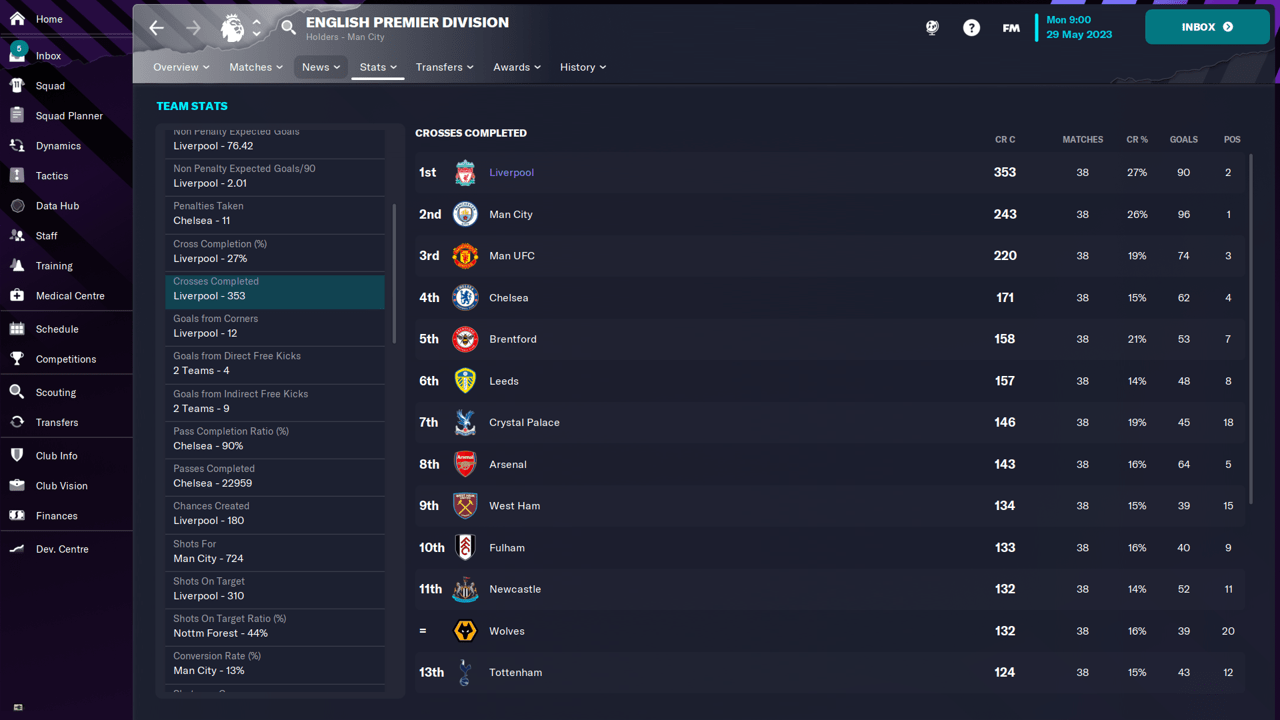 Let this be proof that you don’t need to overload your tactical instructions or make things ridiculously complicated. I set out to create a tactic that provided goal-scoring opportunities from wide areas, and judging by the 353 completed crosses (110 more than second place) and a league-best cross completion of 27%, we achieved that. With the talent we have out wide in players like Mo Salah, Luis Diaz, Andy Robertson, Trent Alexander-Arnold etc., creativity and attacking threat are in no short supply. And with dangerous attacking players in the middle like Diogo Jota, Darwin Nunez, Roberto Firmino, and Paulo Dybala, we were always going to threaten defences anyway. 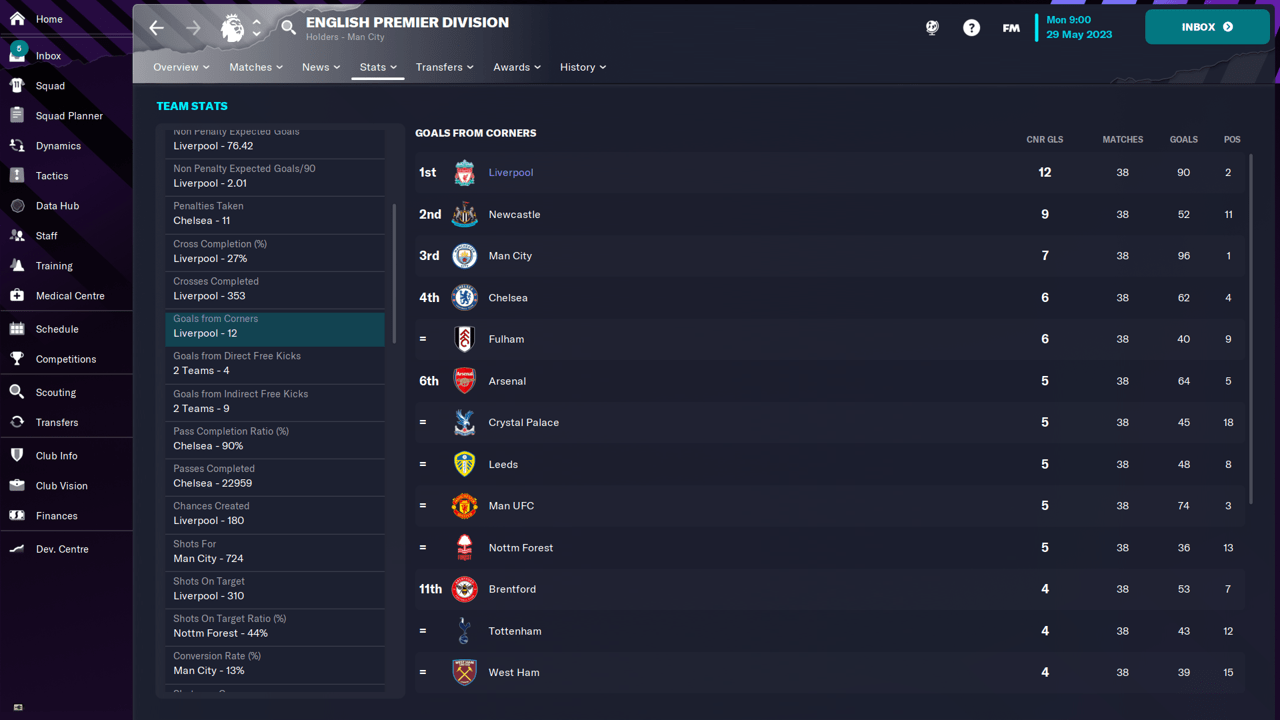 Same with attacking corners, too. 12 goals from corners, more than anyone in the league. This is where we see another pro of playing three CBs instead of two – there’s one more aerial threat in your lineup. While other players chipped in with these goals from corners, my CBs definitely had a hand in those 12 goals, as well as having players who are capable of quality deliveries on a consistent basis.

Trent as a midfielder

I last provided an update on this side-mission here. TAA still has an important role to play at RWB when called upon, and I cannot ignore the quality of other central midfielders I have in the squad, so Alexander-Arnold didn’t play in midfield every game. 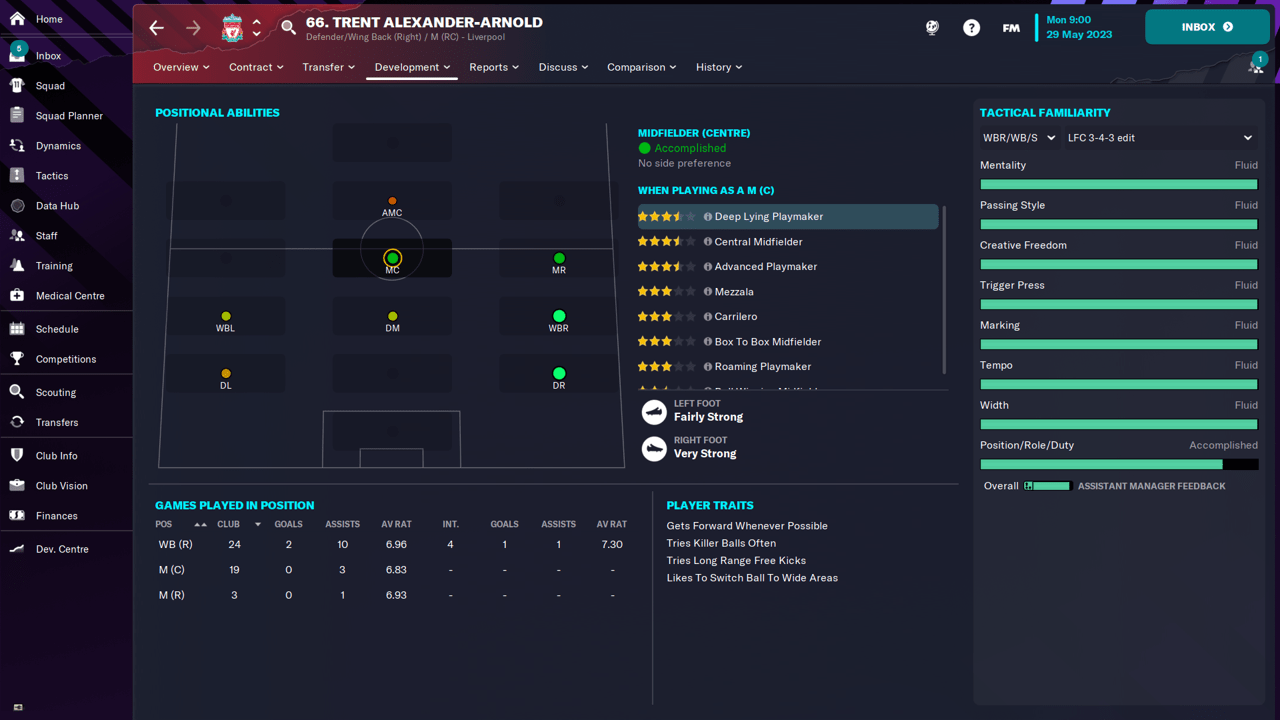 The first note to make is that I did end up altering his training regime to focus on becoming better as a central midfielder playing as a deep-lying playmaker (initially, he was training as an AMC). We have seen some success in this venture – 19 games in total in central midfield, making three assists and recording an average rating of 6.83. As you can see, he is more effective when playing at RWB but that is expected at this stage. While I do intend to continue striving toward this goal, it does depend on the formation and system we end up playing with next season.

Regardless of the tactic we land on for the 23/24 season, there are some players who won’t be at the club, and we plan to bring in some fresh faces as well. Also, there are a few young players who I think are ready to step up and be important first-team members. 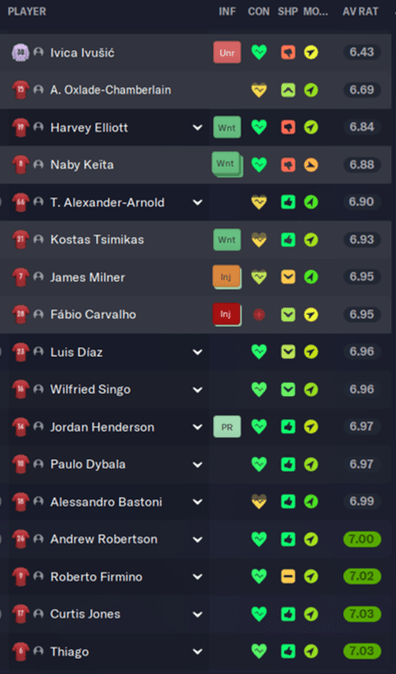 I intend to make some changes throughout the squad, and the best way I can think of to improve the overall standard of the group is to essentially raise the overall average rating – basically, those who have performed at a lower level are in contention to be sold. However, when you look, only Ivica Ivusic performed at a poor level – but he didn’t play a high number of games either. Nobody else really performed poorly over the course of the season – Oxlade Chamberlain made a lot of his appearances from the bench so his value as a squad player cannot be undermined.

Naby Keita’s contract runs out over pre-season and he has no intention of signing a new deal – he was in contention to be sold anyway. James Milner is sticking around – he’s signed a new deal as player/U18’s coach, so he is essentially an emergency squad member.

So, where do I want to add players? Firstly, that depends on which formation we play. I have my eye on Jude Bellingham, who is affordable – very tempting. Finding a new third keeper is on my radar as I look to sell Ivusic, but this is not an urgent matter. Joe Gomez, who didn’t play a lot of games but played well when called upon, is still an option to cash in on, with the view to bringing in a younger defender of better quality. We are stacked in the attacking unit, so there is no urgency there, but finding a long-term replacement for Firmino is on the agenda, so I will be on the hunt for a young forward with high potential.

So, all-in-all, there’s nothing desperate at hand, just the need to continue developing instead of standing still – I have to assume that City will be as dangerous as they were this season so we can try and surpass that quality. A few fresh faces here and there and ensuring squad depth is still strong is my biggest task in the transfer window. Tactically? All will be revealed soon…