In part one of this venture, I talked about my desire and intentions in regards to deploying Trent Alexander-Arnold as a central midfielder. If you missed that one, or want to jog your memory, you can catch up here. Training for this mini project began in October of 2021, and I was well aware of the risks of looking to make a change of this size as we had started the season fairly well (spoiler alert, we’ve only grown stronger as the season has progressed). At the time of writing, I am coming towards the end of the January 2022 transfer window, so TAA has had about three months of training for his new role.

In this article, I will provide an assessment of his development so far – looking at his stats playing in a midfield role, comparing his stats using the data hub, and looking how viable an option this whole thing could be on a permanent basis.

If you missed how I set Trent’s training schedule up to try and achieve our goal, it is covered in part one, linked above. In line with a slightly tactical tweak in my 3-4-3 system, I am considering altering Trent’s training focus to fit that, but we will get onto the tactical side of things in due time.

Three months may seem like a sizeable period of time to some, but when you’re talking about training a player in a new position, it is hardly a blink. The image above shows us how TAA has developed since the start of the season – we can already see some improvement linked to our training focus. Now, for the first month or so of his CM training, I added an extra training focus onto his regime that aimed to improve aspects like first touch, technique etc.: all of these attributes for Alexander-Arnold are superb, but I wanted to improve his dribbling, which stood at 12/20. While this attribute still stands at 12, you can see by the curve on the development graph that he has made a slight improvement in his dribbling. 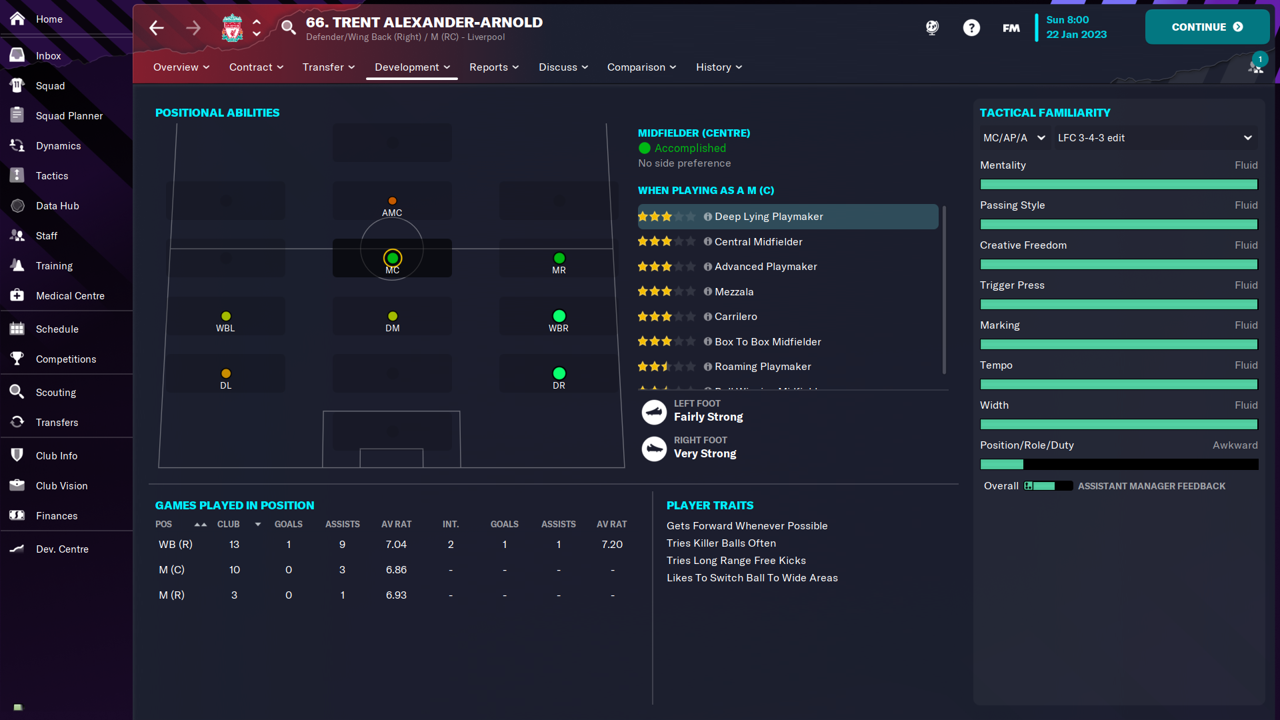 To get more perspective on his development, the tactical familiarity measures on the right side of the screen shows us that while he is extremely capable of playing in our current tactical system, he is still awkward when it comes to playing as a midfielder. One positive note is that his familiarity as an AMC has gone from red to orange, showing a development in playing that role. However, in recent weeks I have adapted the formation to play with a MC rather than an AMC, so I am considering switching TAA’s training to focus on becoming a better MC – this will also give him a better chance at perfect that role as he plays there more often than a more advanced role.

Looking at Trent’s stats and attributes etc isolated is one thing, but a true measure of his impact can be seen when comparing his data to other players. I have once again turned to the data hub to look at his midfield ability against the rest of the league, but also considered his ability next to my existing set of players. 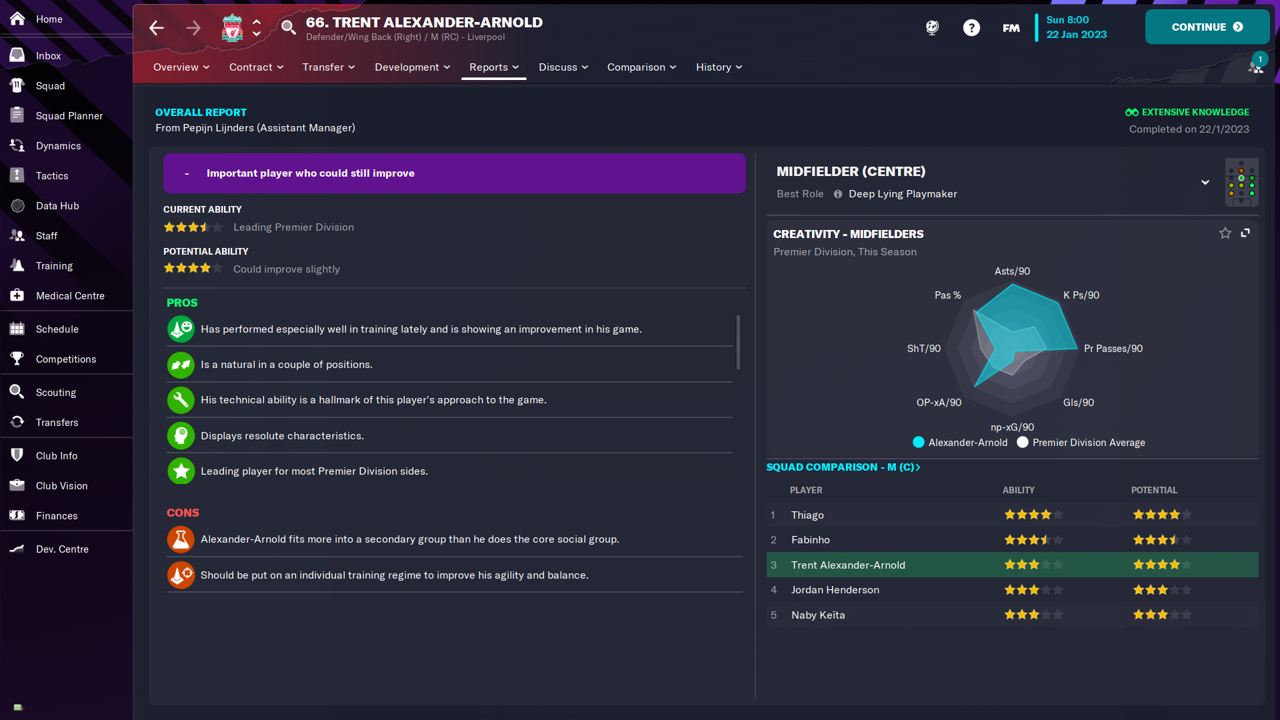 Focusing on the ratings in the bottom right of the screen, he holds the same ability as a number of established midfielders in my squad, and has the potential to reach the levels of Thiago – which would be amazing. The depth I have in midfield is important too, as I don’t yet want to rely on Trent playing in midfield: sometimes I still need his presence at right-wing back. 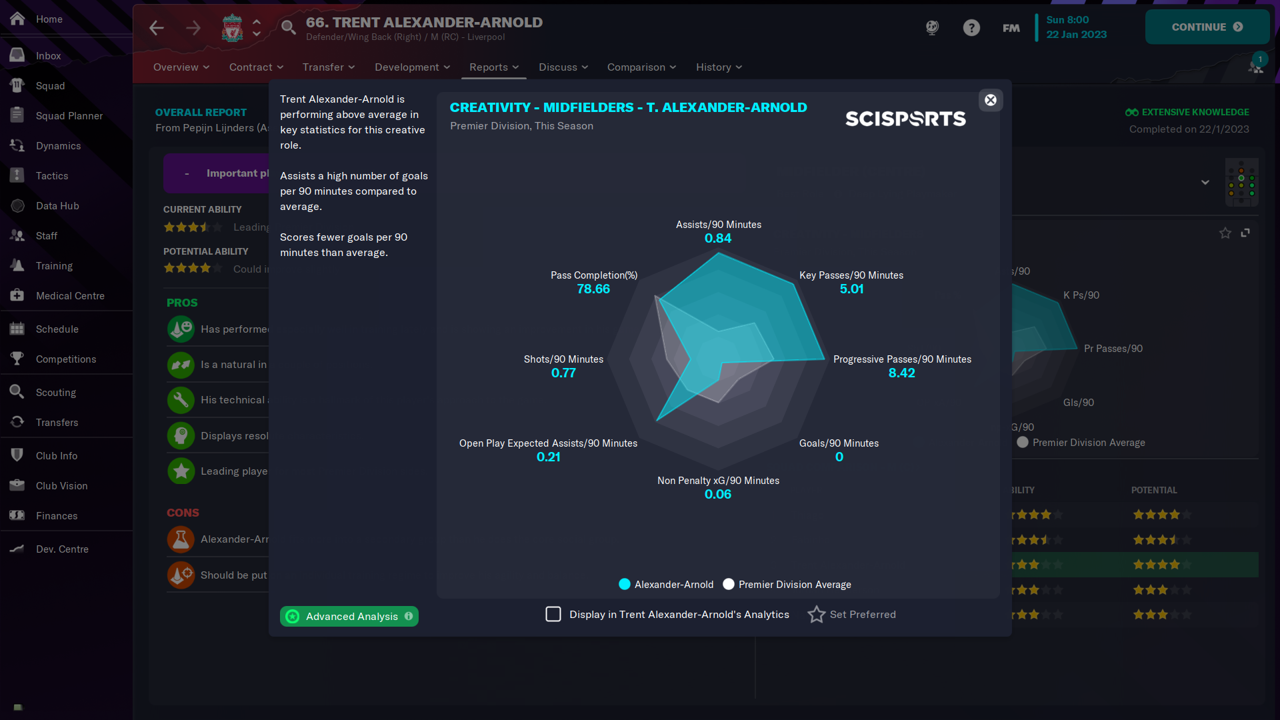 This polygon graph shows us Alexander-Arnold’s performance data compared against other players in the Premier League. Now, it is important to remember that this data includes Trent’s performances at right-wing back as well, it just compares all of his total data against the rest of the league.

He absolutely shines in some areas – ones we’d expect like assists per 90 minutes, key passes per 90 minutes, and progressive passes per 90 minutes: he ranks amongst the league’s highest in these areas. His xG from open play also shows him in a good light, and this is something he will need to keep up in the quest to add goals to his game. As you can see, he doesn’t pose a huge threat directly on goal, ranking low in the shots per 90, for example. 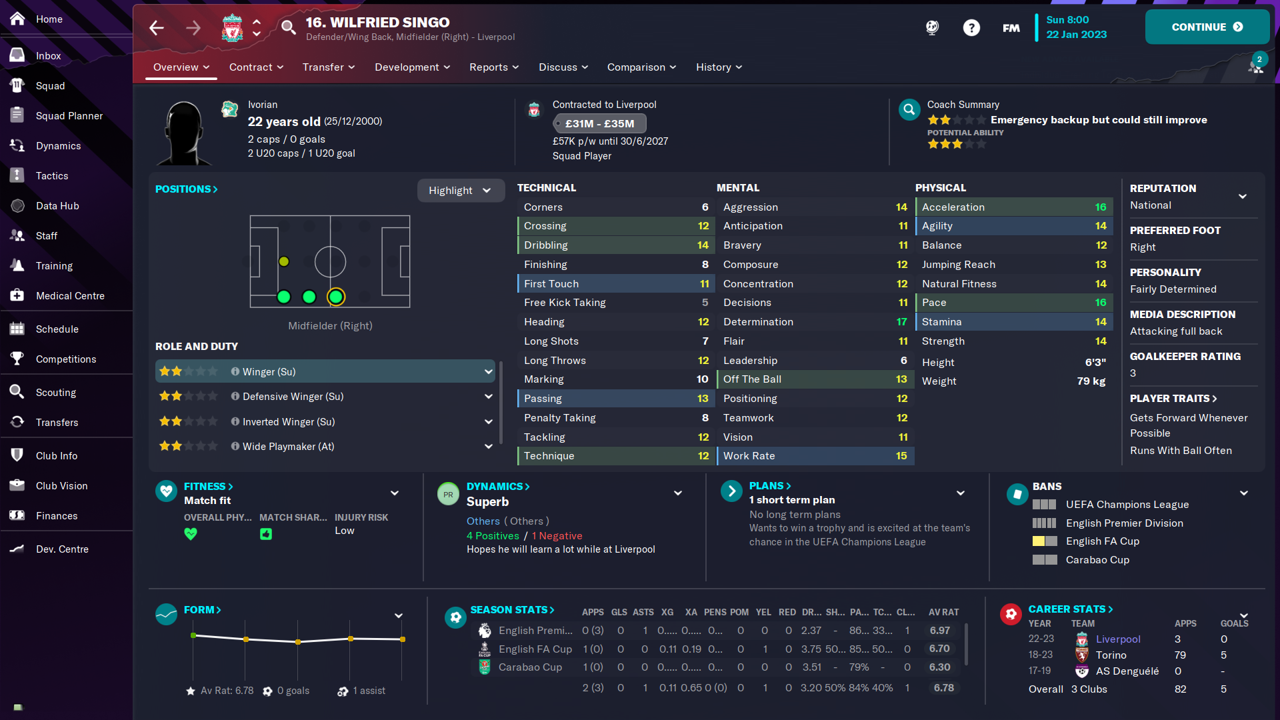 When I feel it is necessary, Trent will play at right wing-back – in games where we aren’t the favourites, for example. Jordan Henderson, James Milner, and Calvin Ramsey were all sharing the responsibility of playing right-wing back when TAA was in midfield, so I felt the need to strengthen in that area. So I went back to the BETA days of FM23, where I played as Torino, so I know their squad fairly well. Wilfried Singo, a right-sided player, impressed in that time, so he was my go-to option – I wanted to sign a player quickly without waiting months for scouting results. I must admit, his ratings in context of my squad are slightly disappointing, but I have faith that he will develop into a top player, and so far, he has proved to be a decent signing. He is for sure my first choice right-back when TAA is in midfield.

This experiment clearly will take a while to take full effect. The early signs are promising, so I intend to continue Trent’s midfield training, and giving him match minutes in that position when feasible. Looking at the bigger picture, even if I end up having to use him as a RWB more, at least I have more depth in that position after the acquisition of Singo.