The Reds have been in sensational form this past month and are currently unbeaten in their last nine games in the Premier League. This weekend’s victory against Brighton was their eighth league victory in succession. They have been performing very well in the final third, but it is their defense that gives the confidence to their attackers to perform well upfront without having to worry about what is happening behind them. Liverpool have kept 16 clean sheets in the league so far.

Most of the credit for their defensive prowess goes to their captain, Virgil Van Dijk, who always shows his presence on the pitch leading the team. But it is Fabinho who acts as the perfect shield for Liverpool’s defense and is the first barrier that any team has to face before they get into the final third. Fabinho is an all-action defensive presence who is smart and physical, with additional offensive quality that often goes overlooked. He is an elite defensive midfielder and gives more freedom to his other midfield compatriots to move higher up the pitch to join the offensive transition.

Fabinho’s favored role is at the base of midfield, whereas in the single-pivot, he can operate as the link between the central defenders and the more advanced central midfielders playing either side of him. Fabinho is the only defensive midfielder in Liverpool’s squad capable of playing the deep-lying role. His reactive defensive skills mean he can do similar work to that of a centre-back, while his mobility and technique make him the perfect midfielder at the base of the three. 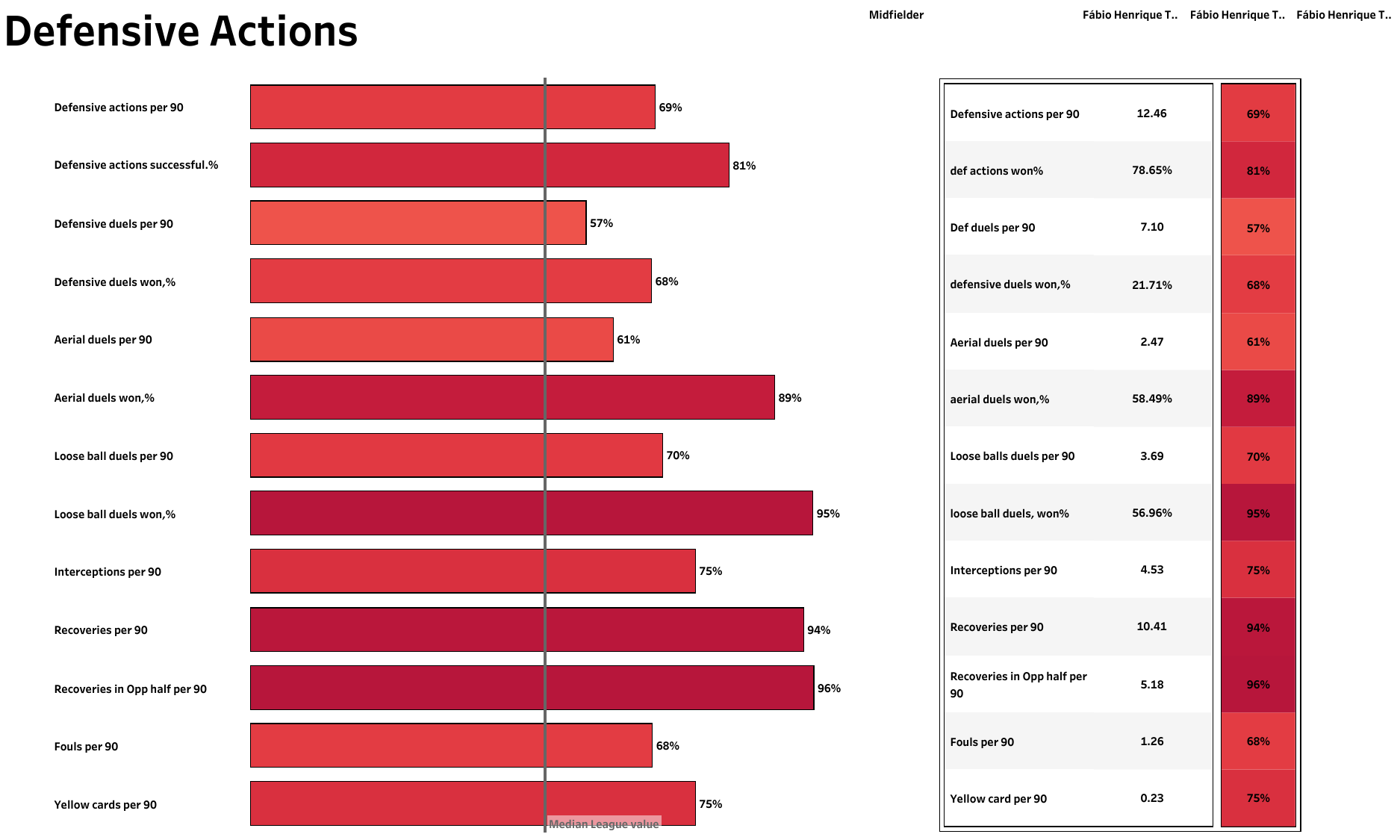 Fabinho’s worth as a defender in midfield was also shown when he switched to centre-back during last season’s injury crisis. He was hugely missed in the centre of the park but was also impressive in the backline, where he displayed the defensive abilities that can often go unnoticed in midfield. Fabinho has attempted 12.46 defensive actions per 90 minutes this season and has completed 78.65% of these defensive actions. He has a high success rate in winning aerial duels as he has won 58.49% and lies in the 89th percentile for the same. He has also attempted a high number of recoveries per 90 minutes. 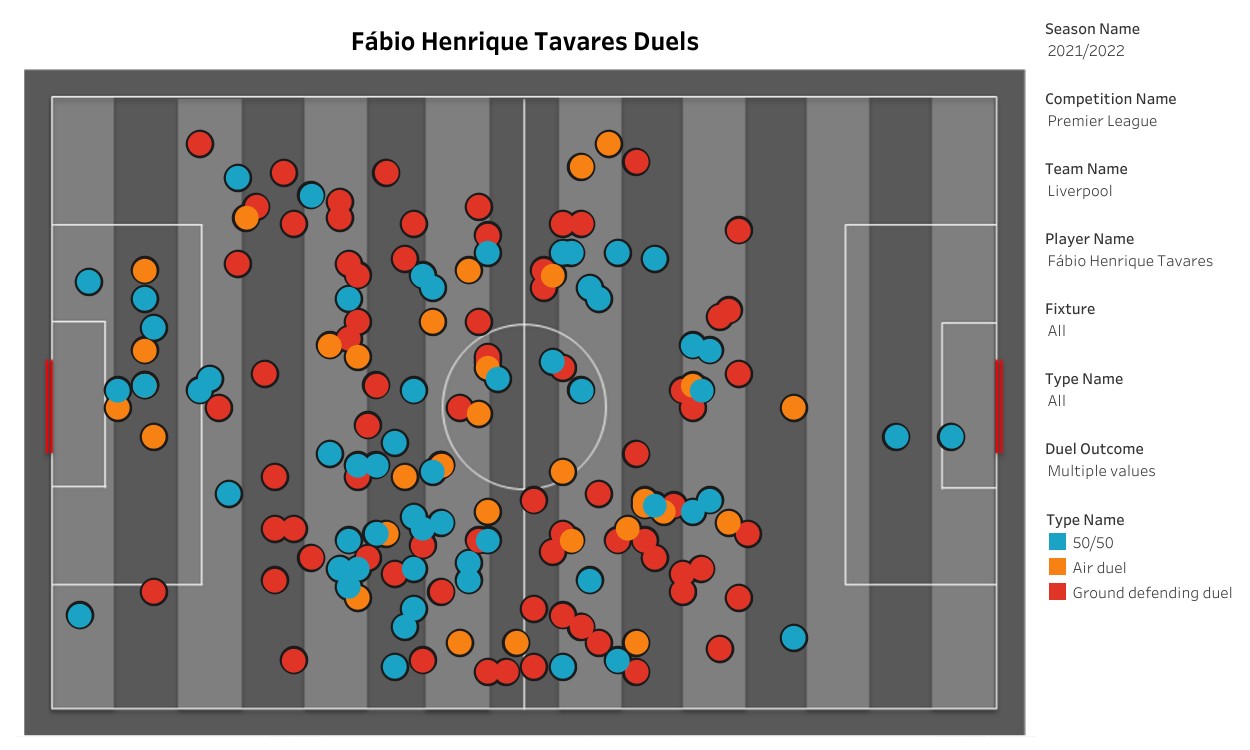 Fabinho has won a high number of duels throughout the pitch, as seen in the above visual. He has won most of his duels in the centre of the park in the middle third. The Brazilian has attempted 7.10 defensive duels per 90 and has also attempted 2.47 aerial duels per 90. He has also attempted several loose ball duels and helps to recover possession of the ball for his team. He has a success rate of 54.96% and recovers most of the loose balls. 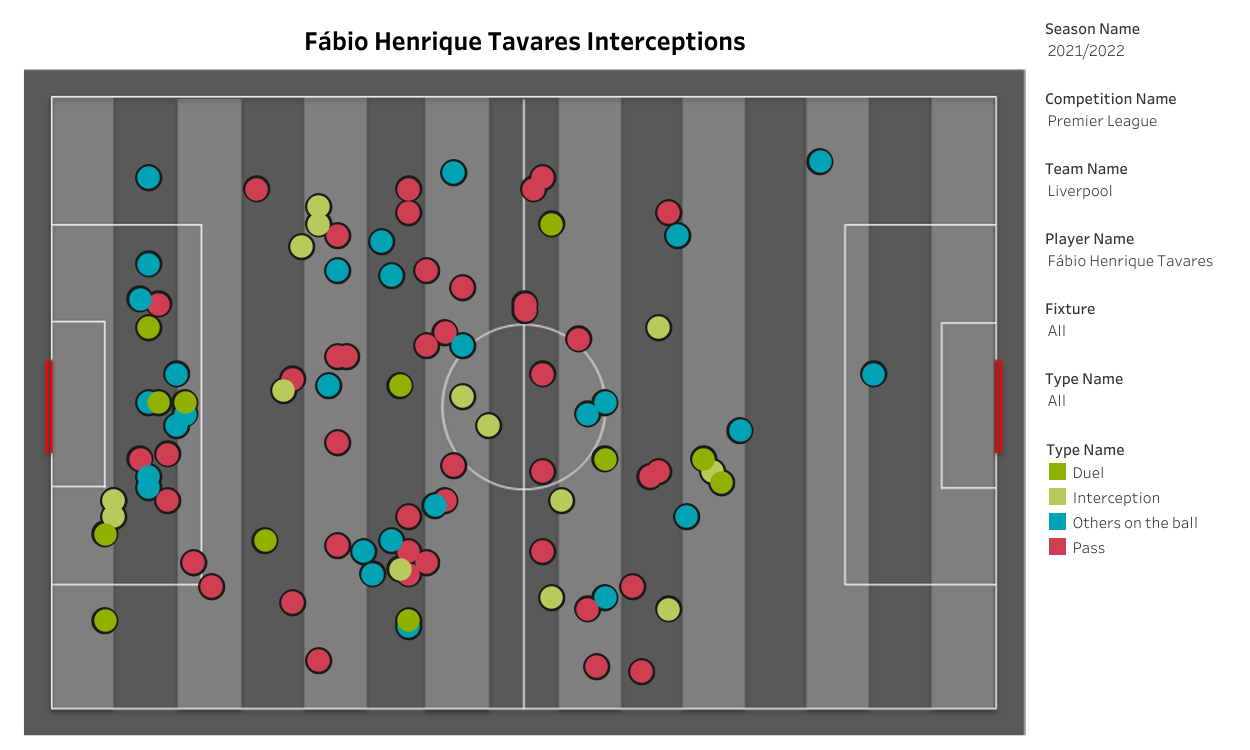 The deepest midfielder can also be asked to press quite high up before retreating to protect the back four, which is where Fabinho’s long strides can be very useful. No other player in the Liverpool squad offers the Brazilian’s combination of physical attributes and positional intelligence. He can read the game very well and can position himself accordingly to intercept the pass and win back the ball for his team.

Liverpool do not have a player like Fabinho who can be their defensive general in the midfield and do all the hard work to win back the ball. There have been games when they have struggled when he is not present on the pitch and is one of their most important players. With Manchester City dropping points against Crystal Palace last night, Liverpool have the perfect chance to move one point closer to the reigning champions.